Ludington boys tennis coach Cliff Perez had high hopes for the future. But the challenge during the 2010 season was convincing his players to hang on for it.

With eighth sophomores in the lineup, the Orioles learned on the fly and won only two team matches that fall.

“I was giving Knute Rockne speeches after the match every day,” Perez said, referencing the famous Notre Dame football coach. “(Saying) if we hold on to the philosophy, we’ll prevail.”

He was right, and they have – and the best could be yet to come.

Ludington followed up that tough 2010 finish by winning its Regional last season for the first time in roughly a quarter century and then tying for 15th at the MHSAA Division 4 Finals.

The Orioles get a Second Half High 5 this week after sweeping a pair of matches against ranked opponents at the Almont Invitational on Saturday, and then knocking off another in a match that could eventually decide the Coastal Conference championship.

Ludington, ranked No. 8 in Division 4 at the time, downed then No. 2 Grosse Pointe Woods University Liggett 5-3 and co-No. 10 Almont 6-2 to finish first at the Raiders’ tournament. The Orioles stayed on a roll by beating Division 3 No. 9 Spring Lake 5-3 on Thursday to go to 8-0 overall and remain atop the league standings with one more match and the conference tournament to play. 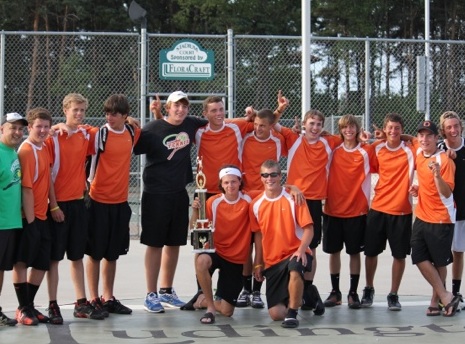 But those are just the latest wins of an impressive run. After finishing third at a quad at Portland to start the season, Ludington earned a 5-3 win over No. 7 Traverse City St. Francis and tied current No. 2 Armada at St. Francis’ tournament later that month. On Sept. 8, the Orioles finished first (using the least sets lost tie-breaker) at a quad against No. 8 Kalamazoo Christian, No. 9 Grand Rapids South Christian and co-No. 10 Portland. Ludington also won its home tournament for the first time in at least four seasons.

The only ranked Division 4 teams Ludington hasn’t faced yet are No. 1 Ann Arbor Greenhills, No. 3 Lansing Catholic and No. 5 Jackson Lumen Christi.

The tough slate is by design. As Perez sat in on the MHSAA Finals seeding meeting last season, he learned how other top teams frequently face each other, and how doing so was the key to getting their players seeded highly for the postseason. So he re-did his schedule this spring to give his guys that opportunity.

“We knew this year we’d have to travel all over the state and take on as many Division 4 powerhouse schools as possible,” Perez said. “It’s the only way to compete. You’ve got to find the best schools.”

A couple additional factors helped Perez keep the Orioles moving forward two years ago. He had relationships with them already, in part because they were Jake’s friends and classmates but also, coincidentally, because he had coached most of them to an elementary recreational league basketball championship years before.

He said all of his players have grade-point averages above 3.0 and two are among the top 10 students in their class, making them easy to teach at a school that doesn’t benefit from having players trained at early ages at outside clubs like many cities in the southern part of the Lower Peninsula.

Most of his athletes play multiple sports, but Jake Perez and Knudsen play year-round at Ferris State, about a 90-minute drive away. Perez went there to play at the indoor facility at least twice a week last winter.

And there’s some tradition to bring back as well. Ludington’s program was built by Howard Jensen, a former NFL player for the New York Giants whose sons Luke and Murphy won the French Open doubles championship in 1993. Howard led the tennis team to 10 Regional championships.

Perez took over the program 14 seasons ago, and guided it to a 10-0-1 record in 2002. That also was the last time the Orioles won a league title, something they’ll try to remedy next week. They’ve never won an MHSAA championship, wishful thinking perhaps, but something worth considering given how the team has succeeded against most of the rest of the best already this fall.

“We feel like we’re in the movie ‘Hoosiers,’ the little country kids that go into the big arena and take on these giants,” Perez said. “But we tell the guys it’s still the same court, still the same ball, and we’ve just got to outplay these guys.”