KALAMAZOO — Game days, Nicholas DeForest can be found sitting alone on the bleachers, autographed cast on his wrist, while his teammates compete on the tennis courts.

Slated for the No. 1 singles spot, the senior from Kalamazoo Hackett Catholic Prep still has a couple weeks until he will join the lineup.

Rather than plopping someone else in the top spot, Hackett head coach Aaron Conroy defaults the point.

So far, that has not hurt the reigning Lower Peninsula Division 4 co-champ.

After defeating Kalamazoo Christian, 7-1, last Wednesday, the Irish are 3-0-1.

In this season’s first Michigan High School Tennis Coaches Association rankings, two weeks ago, Hackett was the top-ranked team in Division 4. Hackett remains No. 1 this week, with St. Francis No. 2.

That bodes well for the senior-laden Irish, who lost just three players from last year’s team that shared the title with Allegan.

Eight of this fall’s 12 starters are seniors.

“The unique thing about this is that for most of the guys, their primary sport is not tennis,” Conroy said.

“It’s really just 10 or 12 guys who decided to come play high school tennis a few years ago. They stuck at it and worked hard.”

One of the seniors, Sam Magnell, is back after opting to play football with his brother Gus, then a senior, last year.

Magnell, playing No. 2 doubles with senior Anthony Toweson, said communication is a huge part of a good doubles team.

“If you can execute well at the net and communicate well with your partner, you will do really well on a doubles court,” added Magnell, who also played lacrosse and basketball.

Two seniors who do that well are Ben Bridenstine and Rhodes Conroy at No. 1 doubles.

Bridenstine lost in the LPD4 semifinals at No. 3 singles last year.

“We had to shift somebody. Ben and Rhodes played doubles two years ago and had some success at 3 doubles early on.”

Both standing 6-foot-2, the lanky seniors take a strong net game into each match.

“Tennis is much more quick feet and a lot more working your legs out (than the other two sports). Tennis really helps me with quick hands for lacrosse and for basketball.”

Bridenstine would love nothing more than to get back to the state tournament. He already has two championship medals; he also was part of Hackett’s 2019 LPD4 championship golf team.

The senior said it is nice to have a partner on the court this year and the pair are having fun, especially with a 4-0 record so far.

“Singles is more running around, more groundstrokes, and switching to doubles is more action-packed at the net, which I like: volleying the ball, hitting overheads,” Bridenstine said.

As defending LPD4 champs, “We know everybody will be out gunning for us, trying to beat us,” Bridenstine added. “But I don’t think we feel a lot of pressure because we’re returning nine of the same guys, so we know what to do.”

Although the Irish had no individual champions at last year’s Finals, they made championship matches in three flights, including at No. 2 singles with current senior Jack Ford.

“Jack Ford’s a fireball,” the coach said. “That’s the best word I can use. He’s a fiery guy who plays with a lot of energy, and he’s very athletic on the court 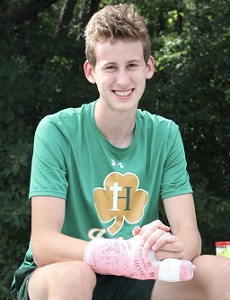 “He’s actually a better athlete than he is a tennis player. He outworks guys.”

Ford said he was surprised the team did so well last season, and he learned from the experience.

“It taught me that anything is possible because we had no idea we were going to even make it to the (state) tournament last year,” he said. “We weren’t in the top 10 discussion, but come the state tournament our team just switched gears and all of us played some of our best tennis.”

Although he played USTA tournaments when he was younger, Ford opted for football his freshman year at Otsego High School before transferring to Hackett.

“Tennis is my favorite, hands down,” he said. “After the break playing football and coming back to tennis, I started enjoying it a lot more.”

Rounding out the singles flights this season are a pair of sophomores, Tommy Kling at No. 3 and Niklas Johansson at No. 4.

“Tommy is our one guy that tennis is his primary sport,” Conroy said. “He works hard at it.

“He made it to the state semi last year as a freshman, which is a very nice result. He moved up to 3 this year and will see some stiff competition.”

Johansson jumped from No. 4 doubles to singles this year.

“The way he plays the game, he’s more conducive to be a singles player,” Conroy said of the move.

“He’s a solid guy. Another sophomore who has a lot of tennis left in him.”

“Marcus is one of our newcomers,” Conroy said. “Jack was at No. 4 doubles for us both years and has a lot of doubles experience under his belt.”

Seniors Toby Alcaraz and David Chafty are slotted at No. 4 doubles.

“It’s Toby’s first year full-time in varsity lineup,” Conroy said. “He’s a talented 4 doubles player. David was half of 3 doubles last year with his brother Matthew, who is not playing this year.”