“It’s somewhat surreal,” he said. “I was with the team my freshman year, and we finished second that year. It’s pretty surreal to see it all come together, all our hard work in the offseason.”

That it did, and in its 14th try, Traverse City St. Francis went home with a championship trophy after a rain-soaked weekend at the University of Michigan and Ann Arbor Pioneer tennis courts.

The Gladiators entered with No. 1 seeds in six flights.

“It’s tough being the top seed, especially for high school kids, but they handled the pressure very well,” St. Francis coach Dane Fosgard said. “It's definitely very exciting. This team has worked very hard. For some of them, they've been at it for four years. It’s definitely a huge accomplishment for myself and the team.”

A near all-day rain Friday got the tournament off to a slow start, and Saturday’s matches didn’t begin until almost noon at both Pioneer and U-M, where the tournament was played on the outdoor courts before it was moved inside after dark.

“It’s my 40th year of coaching, and I’ve never had a tournament where on the first day we didn’t get at least to the semifinals,” Liggett coach Mark Sobieralski said. “It’s crazy.”

Liggett kept it close until the final rounds.

But in the end, St. Francis, which topped the state coaches poll all season, was not to be denied. 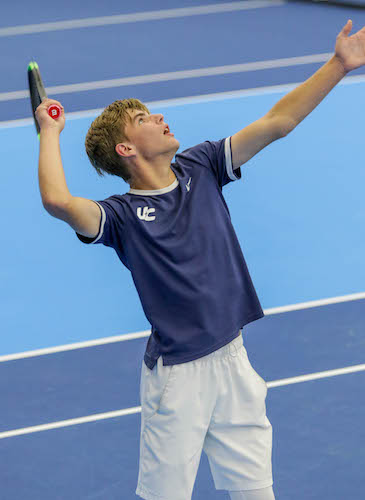 “They were just ready,” Liggett senior captain Jake Tomlinson said. “They were hungry to win that state title, because they really wanted it last year and we beat them. They were really upset about it, and all year they were grinding to get to this point.”

The Gladiators got into a groove when No. 1 singles player Grant Hedley returned from an injury.

“When he came back, our team really turned it around,” said Puetz. “We played a lot of good competition through September, a lot of D-1 and D-2 schools, which really prepares us a lot for the state meet.”

“All of these guys put in so much work in the offseason to reach this point,” he said., “It all pays off.

“I started playing because I got free candy for winning,” he recalled, smiling. “And now here I am, a state champion.”

And, Puetz said, despite a long day Saturday, the wait was worth it.

At No. 1 singles, Grand Rapids West Catholic senior Andrew Solarewicz took the final step with his first championship after finishing runner-up at the top flight in 2020. He defeated Liggett’s Sebastian Courtright 6-1, 6-2, in the final. Solarewicz gave up only eight games total this weekend over eight sets and fourth wins.

St. Francis benefitted from championships at No. 2 singles from Tristan Bonanni, No. 3 from Owen Jackson, and No. 4 from Chris Bobrowski; and from doubles flights at No. 1 from Cody Richards and Ben Schmude, No. 2 from Jack Britten and Anthony Spranger, and No. 3 from Charlie King and Derek Berta.

Hudsonville Unity Christian’s Cam Dykstra and Cory Mitchell were the title winners at No. 4.