ISHPEMING – The Westwood and West Iron County boys tennis teams have had some good battles the past few years at the Upper Peninsula Division 2 Finals, with the two squads finishing as the last two standing for the last three years.

That was the case again Wednesday afternoon with the championship coming down to the last remaining flight, the No. 4 singles match – and it was a good one.

After Westwood’s Matt Paavo lost the first set, he won the next two to take the match (2-6, 6-4, 6-3) and clinch for the Patriots their third title in four years as they edged the Wykons by one point.

“We know we’ve had a really good run against West Iron for a while, not only with boys, but girls too,” Patriots head coach Chris Jackson said. “The last couple of years, it’s come down to one point. Last year, it was the same exact scenario. I’m not sure what doubles flight it was, but it came down to that last one and whoever won that was going to win. Today it came down to four singles. I’m really happy for the kids.”

The pressure may have been on Paavo, but the junior shook it off, even after dropping the first set.

“There was a decent amount of pressure,” Paavo said. “My coach told me before I went into the final set that it was down to me, but my teammates were there and that really helped to have that support.”

Jackson praised Paavo’s performance and said Paavo might’ve learned something after falling to West Iron’s No. 4 earlier this season.

“(Paavo) lost to this kid a week or two ago in two close sets,” Jackson said. “I think after that, he felt like if he played well, he’d have an opportunity. After losing that first set, I’m not sure if it kicked him into gear. But it was kind of like, if we’re going to go down, we’re going to go down the way we want to, and play your game. Matt’s a very good four singles player.”

It was a rough way to end the day for the Wykons, who were looking to stay on top after winning the Finals last season for the first time since 2013. Despite the hard defeat, WIC head coach Joe Serbentas was feeling positive about how his team performed. 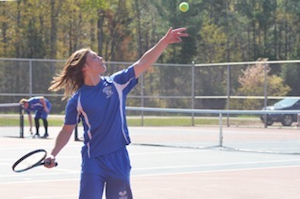 “We got three championships, and Westwood is a really solid team,” he said. “They’re a senior-loaded team and they were probably the slight favorite going in just because of all those seniors and that experience, but we have 10 sophomores in our lineup and I’m looking forward to the next couple of years.

“I thought it was a pretty good season and winning a Great Northern (Conference) championship, that was special too. That was back-to-back years for us. We feel pretty happy with the year. We would’ve liked to have won a championship, but we’ll take the conference championship and know that we’re young.”

WIC and Westwood split the singles matches with Holden Ross (No. 1) and James Swanson (No. 2) earning wins for the Wykons and Chad Pohlman (No. 3) getting a victory for the Patriots.

In doubles action, Munising played the spoiler role and kept the Patriots and Wykons from being the final two teams in each flight. The Mustangs ended up winning the No. 1 doubles title as Landon Peters and Eli Werner emerged with a two-set win, while teammates Russ Holloway and Guillermo Sese made it to the No. 2 final before falling to Westwood’s Hudson Uren and Connor Traver.

“(Peters and Werner) played lights-out today,” Mustangs head coach Rod Gendron said. “They had an excellent season, and they went out on top. They played a really good match at the right time today.

“We knew right away that we weren’t probably going to be legit in the mix for one or two, but we knew three was realistic and that’s where we ended up at. We’re happy with our performance today as a team. I was lucky to have a bunch of freshmen come out, and I had six seniors and it’s been a good crew.”

Werner said a simple strategy helped Peters and him emerge as U.P. champions and added that it helps that they’ve had some experience playing together.

“Just consistency,” Werner said. “Getting all our shots in, and our serving. Getting them in to get points started. We’re friends off and friends on. Last year was our first year together, so we’ve had two full years to work together.”

The Patriots and Wykons split the other two doubles flights. Westwood’s Nathan Ostlund and Jack Mattias took the No. 3 match, while WIC’s Cole Alexa and Lucas Shovald finished on top in the No. 4 match.