KALAMAZOO — The rain poured outside, but the thunderous roars were bouncing off the walls inside the Markin Racquet Center at Kalamazoo College, boosting Troy’s boys tennis team to its first MHSAA Finals championship

The senior-laden Colts amassed 30 points at the MHSAA Lower Peninsula Division 1 championship tournament that lasted until well into Friday evening.

Bloomfield Hills finished second with 26 points, followed by Northville with 23, Novi with 21, and Ann Arbor Pioneer at 17.

An ecstatic Colts coach Brian Miska praised his entire team for its play. Troy won two flights but picked up necessary points by advancing deep into other brackets.

“This (championship) is the first one in the history of the Troy High boys program,” he said. “It’s a very special day for the city.”

Miska said the title is especially significant because “we don’t have any super star USTA players, nationally-ranked kids. We just have a bunch of guys who work their (butts) off. That means a lot to us.”

“We played them this year, beat them twice this year,” Miska said “But they’re still a strong team.

“We always want the competition. This group doesn’t fear anyone.”

Miska, Troy’s head coach since 2012, has a strong connection with his team.

“We have seven seniors in the lineup, nine seniors overall,” he said.

“It’s been really special for me because I’ve known a lot of these kids since they were in middle school and 10th graders, when they were new varsity players. Seeing their progression over the years has been really fun for me.”

Two of those players are the No. 1 doubles team, seniors Andrew Wang and Nikhil Tatineni, who entered as the top seeds.

However, they ran into a tough Northville team in the final, losing to second seeds Quinn Cassar and Adi Pundhir, both seniors, 1-6, 7-5, 7-6(3).

That finale was the top seeds’ second consecutive three-setter.

“I was tired, but in all honesty, the nerves and all the energy here was so much, I wasn’t worried about the energy,” Tatineni said.

“I went in with the same mentality. I think in the (semifinal) match, I was more focused, more zoned in. I just blocked out everything else and focused on my match.”

Wang said the short break between matches was a factor.

“For me, it was definitely nerves,” he said. “We came from a three-set match against Huron and 30 or 45 minutes later we had to play Northville.

“We were trying to quickly drink water, do everything, but it’s all right. We got a (team) state championship.”

This was the first season the Northville duo was paired, but that was definitely not a problem.

“We’ve known each other since middle school, so the chemistry’s there,” Pundhir said.

Cassar said the crowd was a motivating factor. 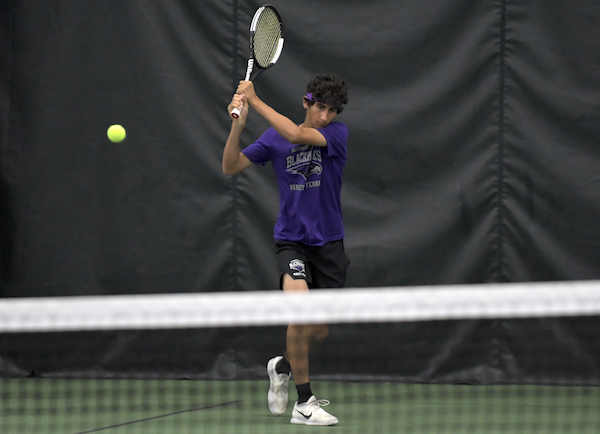 “It’s the best crowd we’ve had my four years,” he said. “It was so loud. We had other teams cheering for us, too, which was awesome also.

“We got loud, we started talking to each other, slowing it down. We started thinking through it more and things started going our way.”

One of the premier matches of the tournament was a battle between a pair of sophomore seed-breakers, who are friends off the court but faced each other for the first time in high school competition.

Following finals match, Kumar was sprawled in his courtside chair, catching his breath.

“I didn’t think I had enough energy left from the last match,” he said. “I guess I did. I just went for it.

“I actually practiced with him last week.”

Anderson, who upset the second and sixth seeds to advance, knew what to expect from his friend.

“I know his game, but I feel like it’s tough for me to go against him,” he said. “He’s got good ground strokes on the baseline and controls the point pretty fast.

“I knew his game so I knew I had to be ready for what he had.”

Bloomfield Hills had the top seeds at all four singles flights, and won the other three.

“I think it was the confidence factor, playing him for the third time,” Stojanov said. “I was confident in my forehand today, which helped a lot.”

The Black Hawks had a young team with Roslin the only senior.

A key for next season is “I think our young team improving in the offseason, getting better every day and keep being excited about tennis,” said Stojanov, who also won a Finals title at No. 2 doubles as a freshman.

A freshman playing in his first Finals, Shaya said: “It’s really fun. Four amazing matches. It started off pretty rough (Thursday) with the rain, but everybody was patient and it was run really well.”

“I’ve trained my whole life for this, and it’s been an amazing adventure.,” he said  “A lot of wins and a lot of losses, and I’ve learned a lot from them.”

In a No. 4 singles showdown of sophomores, Aaron Rose defeated Troy’s Haresh Anand, the second seed, 6-2, 6-2.

Rose lost just six games the entire tournament, and drew confidence from having won his two earlier meetings with Anand this season.

Troy had the top seeds in all four doubles flights, winning two with senior Aryan Gupta and junior Srihari Ananthalwan at No. 2 and seniors Pranav Bellad and Zach Saad at No. 3.