The event, which was hosted by Iron Mountain, was held at various courts in the Iron Mountain-Kingsford area.

The lone flight not won by the Wykons was No. 1 doubles, claimed by Garrett Mann and Ryan Lafountain of the runner-up Ishpeming Westwood Patriots. David Juul of Iron Mountain gave eventual No. 1 singles champ Nolan Anderson another of the best challenges.

West Iron finished with 23 points, followed by Westwood with 13, the host Mountaineers in third with 10 points, Ishpeming with seven points and Gwinn with three.

"You come into these type tournaments, and every school has at least one strength throughout the flights," said veteran West Iron head coach Joe Serbentas. "We've been steady and deep throughout the lineup all season. We've never had as strong of a performance in UPs as we did today, as long as I have been coaching." 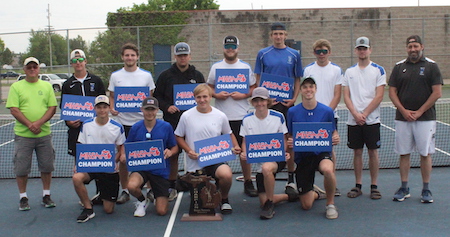 That’s saying a lot. West Iron has won 13 Finals championships total, including seven under Serbentas’ leadership. The Wykons had most recently won in 2018, after two straight runner-up finishes and before finishing runner-up again in 2019. Last season was canceled due to COVID-19.

With 10 seniors, Serbentas expected his team to fare well again in the event. Anderson won No. 1 singles, Mitch Ballinger took No. 2, Alex Wickstrom won No. 3 and Drew Alexa won No. 4 singles.

In the doubles flights, Lucas Isaacson and Cole Alexa won No. 2, No. 3 winners were Lucas Shovald and Colton Holm, and Justin Nelson and Andy Fredrickson won No. 4 doubles. The Wykons’ victories were mostly by significant margins as well.

Anderson, who lost only one match all season, was happy with winning UPs as a senior.

PHOTOS: (Top) West Iron County’s Nolan Anderson sends back a volley during one of his matches Thursday at No. 1 singles. (Middle) West Iron celebrates its Division 2 championship, the 13th Finals title in program history. (Photos by Matt McCarthy.)