By Steve Brownlee
Special to Second Half

ISHPEMING — Something had been gnawing at the West Iron County High School boys tennis team for a full year.

Like an itch that’s hard to reach or a pebble stuck in your shoe while running a race, the Wykons could do little about it.

Until the end of the spring season, that is. That’s when WIC nearly doubled up the rest of the field to easily win the MHSAA Upper Peninsula Division 2 boys tennis championship Thursday at Westwood High School in Ishpeming.

The Iron County school lost last year’s D2 title by a single point to Westwood when its top-seeded No. 1 doubles team was upset in its first match. As the only tandem in that flight to receive a first-round bye, the Wykons lost two points with that loss, turning what would’ve been a one-point win in the meet into a loss of the same margin.

This year, however, WIC scored 21 points, nearly twice runner-up Iron Mountain’s 11. Munising, the only Class D school in the U.P. to field a team, was third with nine, followed by Ishpeming with seven, host Westwood four, Gwinn two and Norway one.

The Wykons not only won five of the meet’s eight flights, but had a representative in every championship match.

That gave the Wykons their sixth U.P. title in the past nine years. And they’ve finished worse than second only once during that stretch.

“The guys were determined that they were going to put last year behind them,” said Wykons coach Joe Serbentas, who has guided them to all six of those titles. “Everybody suffered this year (in the offseason).

“But we have a veteran team with a lot of juniors, and for plenty of them this is their third year playing varsity.” 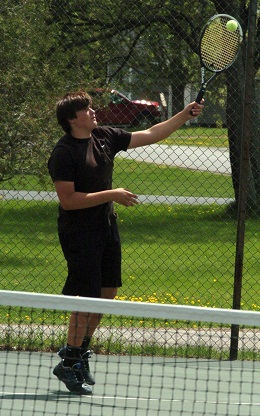 Fully half of their players on Thursday also played for the Wykons during their 2011 championship run, a one-point victory over Iron Mountain.

In a spring that started like winter and stayed that way for far too long, in an odd way it made sense the final tennis match of the season would be played on a sweltering day.

With temperatures heading well past 80 degrees and closer to 90, the Wykons wrapped up their title not long before a typical summer afternoon thunderstorm hit the Ishpeming area.

They were playing at the No. 1 flight, the same one that proved pivotal in the Wykons losing the title a year earlier.

“I think they had to wait awhile before they played us,” Peterson said about his opponents’ slow start. “Then in the second set, I think we started worrying about what we were doing instead of just playing.

“But we both played well in the third (set).”

The tournament wasn’t really the blowout that the final score would indicate, since Iron Mountain made five championship matches.

The problem? The Mountaineers not only lost all five, but lost each to WIC.

“I definitely thought we had a shot (at winning the title),” Iron Mountain coach Greg Stegall said. “We just came up short here and there, and West Iron didn’t.”

The Wykons also collected titles at Nos. 2 and 3 doubles, along with Nos. 3 and 4 singles, again each over a Mountaineers’ opponent in the title match.

The other three flights were claimed by the northern tier of schools at these finals, two by Munising, which has never played a home match due to a lack of playable courts anywhere in Alger County.

That was actually a factor that may have helped Munising, according to Ian McInnis, who joined fellow freshman Trevor Witty in winning the No. 4 doubles title.

“It was just like any other match, since we never play at our own place,” McInnis said about traveling to Westwood.

The biggest upset of the day may have been pulled off by Mustangs sophomore Noah Ackerman, who defeated WIC senior Austin Waara at No. 1 singles, 6-2, 4-6, 6-2.

Though Ackerman was the top seed, Waara was gunning for his fourth straight U.P. singles title, including his third in a row at No. 1. He won a U.P. title at No. 3 as a freshman.

Ackerman, though, is a rising star in U.P. tennis and didn’t lose a match all spring. Thursday marked the first time the pair had ever squared off in high school. They came close at last year’s U.P. Finals, when as a freshman, Ackerman was knocked out one match short of facing Waara for the No. 1 singles championship.

“He was coming up to the net a whole lot today,” Ackerman said about Waara.

His coach echoed that. “You could see that Waara had a game plan, but Noah was able to figure it out,” Munising coach Rod Gendron said. “Noah was down 2-1 in the third set and then he won the last five games. That was when he really put the pedal to the metal.”

The other champion was Ishpeming sophomore Guillermo Ansede, an exchange student, who won the No. 2 singles title with a 6-1, 7-6 (7-2) victory over WIC’s Ryan Rogers in the final.