By Craig Remsburg
Special to Second Half

Winning all three flights they placed in championship matches, the Patriots came away with 13 points to beat runner-up and defending champion Iron River West Iron County by two on Wednesday.

Gwinn and Munising tied for third with 10 points, followed by Iron Mountain (8), Ishpeming (2) and Norway (0) in action held at Westwood High School.

“We definitely thought it was possible for us to win,” Patriots coach Chris Jackson said, “but it didn’t play out as we thought. We thought we’d need more points to win.

“We had some help. It was more than a two-horse race, and there were four teams with at least 10 points each.”

“Everyone held their serve — their flight,” he said. “All three of our No. 1 seeds won. The fact we could hold our flights was big.

“LeRoy was a No. 2 seed and faced a good player in West Iron County’s Ryan Rogers. Quinn was able to go out there and get that point.” 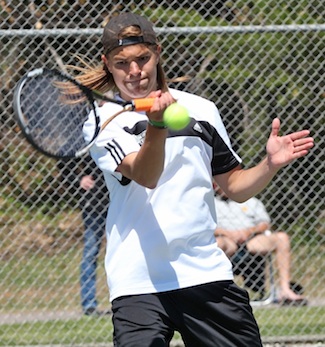 Westwood got wins from Brett Fredrickson at No. 4 singles, Mitch Messing and Tristan Vitale at No. 3 doubles and Brandon Benda and Hunter Roose at No. 4 doubles.

Fredrickson said he was shaky in his first set of a 6-3, 6-0 win over West Iron’s Erick Upperstrom.

“But Coach (Jackson) told me there were some things I needed to focus on, like hitting off my front foot and not my back, and not getting my hips into the shot,” Fredrickson said. “I also let the other guy make some mistakes.”

“We were nervous at the start, but as time went on, we got better,” Roose said. “Our ball placement was really good.”

Added Benda: “After the fourth game (of the first set), we played with more confidence. We also tried to keep the ball in play.”

Munising’s Noah Ackerman capped an undefeated season with a win at No. 1 singles over Gwinn’s Inigo Cepeda, 6-3, 6-0.

“I was shaky at the start and started slow,” Ackerman said. “(Cepeda) started approaching the net, and I knew I couldn’t outhit him because he’s a great player and hits good strokes.

“So I tipped (the ball) up and when he approached the net, I started to pass him down the line.”

It worked as Ackerman overcame a 2-2 start to win going away for his second straight Upper Peninsula Division 2 individual title.

A senior, Ackerman said Cepeda — an exchange student from Madrid, Spain — started losing confidence midway through the first set, enabling the Mustangs netter to “focus on what I was doing.”

Cepeda might have been unsettled on the court. He broke the strings on his racket in the first set and had to use that of No. 2 singles teammate Micah Heat the rest of the match.

“Inigo is more of a clay player, too,” Gwinn coach Dan Turecky said. “He plays a European style with more power. But (Ackerman’s) control won today.”

West Iron got wins from Andrew Peterson at No. 2 singles and Adam Newby at No. 3.

“We both rallied well in the first set,” Peterson said of his 7-5, 6-3 win over Micah Heath of Gwinn. “We both had good ground strokes.

West Iron coach Joe Serbentas, whose Wykons have won a U.P. title six times in the last 10 years, said he and his netters were “disappointed” in their runner-up finish.

“A couple of our flights in doubles didn’t perform as well as we wanted,” he said. “My No. 1 and No. 2 were top seeds, but didn’t get any points. We struggled there.”

Gwinn placed four flights in the finals, but managed to win just one — a 6-2, 6-4 triumph at No. 2 doubles by Mason Bruce and Erik Asplund over Munising’s Joel Werner and Nick Cerone.

“Our serving was good today. We had a lot of aces,” said Bruce, who left the courts immediately afterward to play baseball Wednesday evening for the Channing American Legion baseball team. “Our net play was good, too.”

Turecky said he was “very pleased” with having four Gwinn flights in the finals.

“But we only won one. We didn’t pull through those points, ” he lamented. “We went up against some good players. ”