The Patriots came out and did exactly that, winning six of eight flights for their fourth straight U.P. title.

“It feels awesome. Coming in, we knew it was going to be a real tight battle between us and West Iron,” Jackson said. “At the end, it turned into a virtual dual meet. We both had seven or eight finals. The difference was we won six of them.

“We were trying to find four wins in the finals,” Jackson added. “We had two that we felt pretty good about, and then there were a whole bunch of close ones. I think that’s exactly how it played out.”

Jacob Kerkela’s win in No. 2 singles sealed the team win for the Patriots.

Jackson said there was no secret weapon in terms of performance. The players just had to stay in the moment. 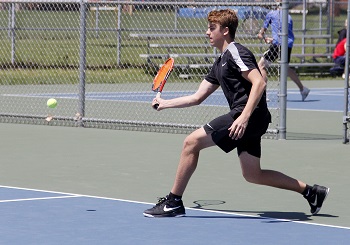 “It’s hard in these situations. Everybody thinks you have to play your best tennis, you have to do all this, but the question is how do you get there? We keep things simple; there’s not a lot of pressure on these kids,” Jackson said. “Everybody wants to do well on a day like this. I think it’s doing the simple things, taking care of things that you have control over.

“A day like this can really get away from you when you start worrying about things that are going on on a different court, or a different site than just focusing on what you need to do.”

Iron Mountain coach Sharon Ducat said she expected West Iron County and Westwood to square off for the U.P. title. Her team, meanwhile, was steady but not as solid.

“We did OK. We are kind of a middle-of-the-pack team,” Ducat said. “We had a win at No. 1 singles, which was great. I’m really happy for Tysen for that.”