ISHPEMING – On its home courts, the host Westwood boys tennis team claimed the Upper Peninsula Division 2 title by winning four flights and making the finals in all eight Thursday afternoon.

Westwood won the tournament going away with 20 points, while second place Munising’s 12 and third place Iron Mountain’s 10 provided the most turbulence. The Mustangs and Mountaineers both had two winners and four finalists. West Iron County came in fourth with six points, Ishpeming had three and Gwinn rounded out the six teams with one point.

Westwood had last won the Finals title in 2019 and finished runner-up to West Iron last season.

“We were lucky that we had everybody in the finals, which is half of the battle at UPs – getting there,” Westwood coach Sarah Massie said. “We’re happy to see everybody be able to make it there even though we weren’t necessarily favored once we were in the finals in all of the spots. Everybody played hard today, and there were some close matches that we had to get through.”

The Patriots scored victories in No. 3 and No. 4 singles, along with No. 3 and No. 4 doubles. In one of the knockout, drag-out matches that Massie referenced, Patrick Klumpp had to survive his semifinal before advancing and winning the No. 3 singles flight. Klumpp defeated Ethan Isaacson of West Iron County with the help of a tiebreaker in the second set before cruising for the title in a 6-0, 6-1 win over Munising’s Cole Whitehead.

“It’s been a rough season here and there, but today I felt great,” Klumpp said. “I love this sport, it’s fun, there’s always good competition, and it’s fun to be a part of a team.”

Westwood’s other singles winner Mason Hietikko had a bit of a different path on the way to his No. 4 singles victory. After starting the season at doubles and struggling, he made the move to singles and didn’t look back. In the final, Hietikko scooted past Iron Mountain’s Reece Kangas for the 6-1, 6-2 win.

“I think it’s amazing,” Hietikko said. “Coming out here and winning my flight is an amazing feeling. Being consistent, and not making stupid mistakes and getting in my head, was a perfect way to win.”

John Thomsen and Nick Salzwedel pulled out the No. 3 doubles win for Westwood after knocking off Munising’s Danny Goss and Aidan Gumz in the only three-set finals match 6-3, 3-6, 6-4. Rounding out the Patriots’ four victories, Jayce Patron and Mitchell Ford defeated Iron Mountain’s Dylan Kingren and Carter Kassin in No. 4 doubles 6-4, 7-5.

Westwood won both girls and boys tennis titles this school year, dating back to the girls’ Division 1 victory in September. The success of the program as of late hasn’t gone unnoticed, and it’s furthermore setting things up for the Patriots in the future. 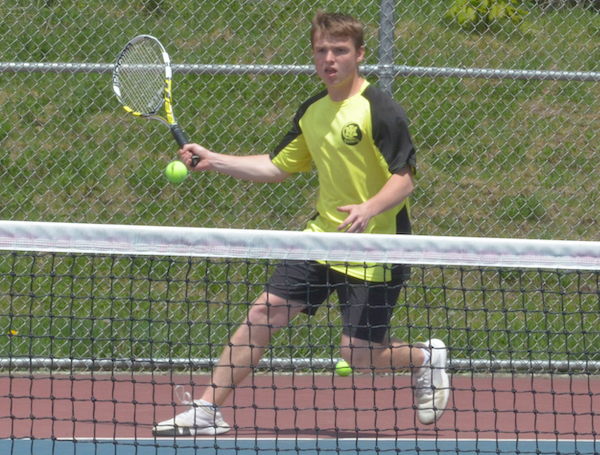 “It’s fun to see, and it’s good for our community, and just tennis as a whole for the girls and boys to see success,” Massie said. “We just started a middle school program, so for those kids to see the high schoolers and the kids that they look up to, is just good for our tennis program and for the game of tennis.”

Munising galloped to win the other two doubles flights on the way to their second-place finish. The No. 1 doubles team for the Mustangs of Alex Vandzandt and Lucas Westcomb defeated Westwood’s Ryan LaFountain and Chase Prophet 6-2, 6-3. The pair are good friends and graduating together this year, and also won a U.P. Finals championship after not having a team for the past two seasons.

“It feels great honestly just coming out here after two years of not playing. Becoming U.P. champions is a great feeling,” Vandzandt said. “We had to search and search for a coach. Abbie Hayes came out. She’s only 20 years old, she’s still going to college, she worked hard to get to all of our practices. I’m glad we could be here, and I’m glad that a couple of our teammates could be U.P. champions.”

Munising’s No. 2 doubles team of Jesse Duran and Carson Kienitz also prevailed with a tight 6-4, 7-5 win over Westwood’s Gabe Tossava and Zak Senske. With a new core of players on the team, especially for those seniors who haven’t played in two years, the Mustangs did more than show up at U.P. Finals.

“It was very nerve-racking, but we tried to keep our cool, and keep the ball in,” Westcomb said. “We just had to get back in our groove and get back those skills from our freshman year, and get the hang of everything.”

Iron Mountain also produced a pair of winners atop of the singles flights. David Juul ended his strong season with a 6-0, 6-3 victory over Westwood’s Andrew Niemi in the No. 1 singles finale. The senior’s search for that elusive U.P. championship came to a close after falling short in his previous tries.

“I thought my backhand was on; I had a lot of kill shots with my backhand,” Juul said. “My first serve was going in a lot, so I was very happy. It feels good to get the win. Andrew (Niemi) played really well, and it was a fun match to play in.”

Brenden LaPoint was victorious at No. 2 singles for the Mountaineers with a 6-0, 6-3 win over Westwood’s Bryce Markham. LaPoint had been out most of the season with a foot injury, and he doubted that he would be able to play at all this season. With the injury still nagging him in recent weeks before getting fully healed a week ago, LaPoint’s win wasn’t as ordinary as others.

“I really wasn’t sure if I was going to make it to UPs this season with my foot injury,” LaPoint said. “It was good to be able to get back for UPs and take home the championship.”

PHOTOS (Top) Ishpeming Westwood's Bryce Markham returns a volley during a No. 2 singles match Thursday. (Middle) Iron Mountain's David Juul sends a shot at No. 1 singles on the way to winning his flight. (Photos by Travis Nelson.)