They did, and won all six of their title match appearances to win the overall championship with 20 points. Iron River West Iron County was runner-up with 15.

“I think a lot of it was about redemption,” said Westwood coach Chris Jackson. “We have six seniors. A number of them had disappointments last year, and we still were able to win. A lot of those kids came back and fought through some tough moments today and got an extra point or two.”

Westwood shared the championship in 2015 in Iron Mountain, but now has won MHSAA titles to finish three straight seasons and four of the last five.

West Iron County coach Joe Serbentas said he was happy with the way his team performed in finishing second to the more experienced Patriots.

The Wykons advanced to championship matches in six flights as it sought its first team title since 2013.

“We knew coming in that it was going to be a tight match with Westwood,” Serbentas said. “I was just happy that our team had an opportunity at the very end to try and take a championship as a team. We know they have a nice team. I was proud of the way our boys fought.”

West Iron County had trouble converting on its opportunities to win championship matches. The day’s longest was No. 3 singles between James Swanson and Adam Hyttinen, which lasted more than an hour. The two traded tiebreakers in the first two sets before Hyttinen won the last set, 6-2, and finished Westwood’s championship. 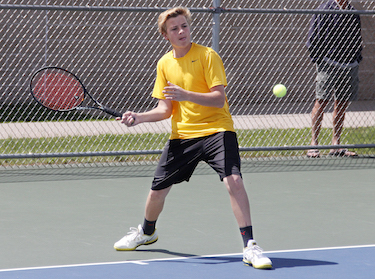 Serbentas was optimistic and said with a young team including just three seniors, the sky is the limit next year.

“I thought the whole team improved as the season went along,” Serbentas said. “That’s all you can ask as a coach is to give your team an opportunity to win at the end, and we did. We’re going to be back next year, and we’re going to have to learn how to finish some of these flights and win some championships next year. That was the critical point of the day: we could not win at the end.”

Mountaineers coach Greg Stegall said his team did OK, but its depth didn’t match up.

“We’re still producing the best players at the top flights — one singles and doubles,” Stegall said. “Overall, team depth, we just don’t have the numbers. These schools, they have entire JV squads, which means they have over 30 kids to develop. We’ve got 16 at the most.”

Ishpeming placed fourth with four points, followed by Munising (three) and Gwinn (one).

PHOTOS: (Top) An Ishpeming Westwood doubles player returns a shot during Thursday's Division 2 Final. (Middle) Iron Mountain's Tysen Wadge prepares to send back a shot on the way to winning the No. 1 singles title. (Photos by Adam Niemi.)