Involved in track & field for much of his life, Turcheck was a pole vaulter at Taylor Center during his high school days, then at Western Michigan University. He later served Taylor Center for more than three decades as track coach, where he mentored five state champions.

He also coached two future Olympians. Earl Jones, who won MHSAA Finals track titles in both 1980 and 1981, and grabbed bronze in the 800 meters at the 1984 Summer Olympics in Los Angeles. Another of his athletes, Deby LaPlante, qualified for the 1976 Summer Olympics in Montreal as a high hurdler.

In Turcheck’s possession is a medal. Etched on the back, pounded out in the style of the time, are five lines.

Those 31 characters honor his MHSAA championship performance on what became a windy day in Ann Arbor at University of Michigan’s old Ferry Field.

But there is one problem. Turcheck’s name doesn’t appear on the MHSAA list of Finals champions. According to the list, the championship belongs to Joe Baldy of Monroe.

(The list has since been corrected and amended, per the story to be told below.)

For ‘trackheads’ – diehard fans of the sport and the events that comprise a track meet – as well as sports historians, a newspaper’s agate page is nirvana. Contained within the tiny type are the details that aren’t always relayed within the article covering a sporting event. Things like baseball batting averages, league standings, box scores, stat lines, team transactions, TV and radio schedules, and most everything else that doesn’t fix conveniently into the day’s sports section might appear on the page. For a track meet, a full agate listing will include place finishes as well as times, heights and distances that were used to determine winners of events, as well as detail on record performances that were equaled or topped.

Jim Moyes is a passionate sports fan. An undersized high school athlete at a small school, where participants of all shapes and sizes are valued, Moyes was the son of a prep coach at North Muskegon High School. He grew up and became, among other things, a beloved and respected broadcaster and public address announcer. Few were as well-prepared as Moyes, who studied agate pages, past performances, and, it seemed, the family trees of the participants prior to sitting before a microphone. His knowledge, as well as his sense of humor, was on display for 43 years in West Michigan, where he would balance his understanding and importance of an event with the awareness that, in the end, what we were experiencing was still just a game. 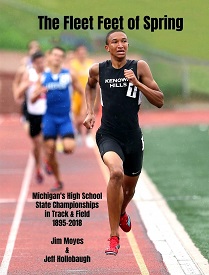 Well over 30 years ago he began his research into a passion project. Moyes is a ‘trackhead.’ And, because of this, in 2019, he officially became the author of a published book.

Way back, Moyes began digging into microfilm with the goal of capturing the names and events behind each MHSAA Finals track championship. He shared his initial research with the MHSAA, and for years the Association has highlighted his work on its website with lists of individual state champions on both their boys and girls track pages.

A couple of years before wrapping up his research, Moyes began work with another certified ‘trackhead,’  Jeff Hollobaugh – associated editor of Track & Field News, the voice of countless track meets, and as Moyes states, an “expert on this great sport” – to tell the stories of the meets in book form. “The Fleet Feet of Spring” – a history of Michigan’s High School State Championships covering the span 1895-2018 – was the result.

But, with good reason, Turcheck’s name doesn’t appear in the publication.

Post-event press coverage on the 1960 MHSAA State Track Meet for most readers across Michigan arrived in their newspaper courtesy of coverage by wire-service reporters from The Associated Press or United Press International. With four meets to cover that encompass hundreds of prep athletes, the arch of the stories generally focus on record-setting events and streaks of success.

In Class A, the story was focused on the Pontiac Central squad that slipped past Flint Northern, 44-41, for its fifth title in six years. It was the seventh year in a row that the Vikings finished second at the meet. Pontiac junior Bredell Pritchett’s 59-foot-5¾ toss of the shot exceeded the previous state mark by better than two feet. Northern’s Maurice Pea, clocked at 9.8 seconds, tied a 35-year-old mark in the 100-yard dash. Al Ammerman of Dearborn established a new high jump record.

In 1960, the details of the pole vault simply weren’t the story.

Available space in newspapers is dictated by advertising. That certainly is the case today, and was most certainly the case back in the glory days of newsprint. Decisions are made by sports editors and staff on the amount of space available, and what agate will be printed. The results of a track meet, let alone the four simultaneous meets that comprise the MHSAA state championships, can certainly eat up plenty of real estate.

Relatively few papers around Michigan dedicated space to the MHSAA Track Championships back in May 1960. The old Detroit Times is among those that did include agate. Study of the listing however provides little clarity, as the paper listed only Metro Detroit finishers beyond the event winners. For the pole vault, that means confusion.

The Battle Creek Enquirer lists only Baldy as the winner of the event and John Best “tied for fourth.” The Lansing State Journal agate shows only Baldy as the event winner. No track agate appears in the Detroit Free Press. Although the paper notes that team-wise, Birmingham finished third with 18 points, followed by Dearborn, Ann Arbor, Muskegon and Saginaw Arthur Hill in its coverage, the results from the Class A pole vault are not mentioned.

The Traverse City Record-Eagle does not include agate, but the article notes King’s fourth place finish, and that the Trojans track team spent the night sleeping on tumbling mats in the Saginaw Arthur Hill gymnasium when its bus broke down on the return trip home from Ann Arbor.

So, with little surprise, Moyes’ research concluded Baldy was the 1960 Class A pole vault champion.

Story of the Medal 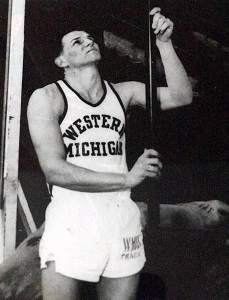 Turcheck was recently visiting a friend, Bob Parks, the head track coach at Eastern Michigan University for 34 years and an assistant track coach at Western Michigan during Turcheck’s time in Kalamazoo competing for the Broncos.  On a visit this past fall, Parks mentioned the Moyes and Hollobaugh book that he had recently received.

“Mick, your name is not listed there,” said Parks. “I know you were tied for the state championship because I was the coach at Redford Thurston at that time and I was at the state meet.  I remember you being announced as the co-state champion of the pole vault.”

“I said, ‘Really?’” recalled Turcheck from his home in Taylor.

After the visit, he made a couple of phone calls to friends.  In turn, some of those folks began reaching out to others with the story.

According to Turcheck, after the pole vault was over, a meet official said they only had one medal and they were going to flip to determine who would receive it. Turcheck won the coin flip and was awarded the souvenir. A duplicate medal was to be mailed to his co-champion.

Newsprint and the Miracle of Microfilm

Before the days of smartphones, e-mail, websites, pop-up ads, and cloud storage, the history of cities, big and small, was captured in print and sold on street corners, at newsstands, and, beginning in 1947, by coin-operated vending machines.

Monthly subscriptions meant home delivery of the day’s news, and newspapers were everywhere.

Before Craigslist and Google Ads, there was money to be made in helping businesses advertise their wares, employers to advertise job openings, and for individuals to sell items and offer apartments for rent in the classifieds. That strong revenue stream supported large staffs and solid coverage of local events at daily and weekly newspapers.

Some of that content – that history – is slowly coming online, but most of it remains tucked away on microfilm and microfiche in local libraries across America.

And sometimes, local pride resulted in details about the exploits and accomplishments of area athletes to appear in smaller town publications that cannot be found elsewhere.

Niles Kruger, a sportswriter at the Monroe Evening News, followed up on a request by Johnson to check microfilm from newspapers in the area for any detail that might exist. Fortunately, the coverage in the Evening News appears to help clear up much of the story.

And sometimes, long lists are subject to other errors.

“ANN ARBOR - John W. Baidy added his name to a long succession of great high school pole vaulters representing Monroe’s Trojans here Saturday,” stated the Evening News, “when he cleared the bar at 12 feet 9 ½ inches to tie with Mickey Turcheck of Taylor Center for first place in the state Class A track and field finals on Ferry Field …”

“Baidy also cleared the bar at 6 feet 1 inch in the high (jump) to gain a two-way tie for third place with Pontiac Central’s Bill Lee. Baidy thus accounted for a total of 9 points to tie the Trojans with Lansing Sexton and Ypsilanti Central for 8th place in the final standings.”

While there is no mention of the flip for the metal, the article backs up Turcheck’s recall of the day.

Recognizing that despite their best efforts, Moyes and Hollobaugh know that errors can appear in the publication. In their “Notes to the reader” section, they ask readers to please make contact if any mistakes are spotted.

“Thanks to today's modern technology Jeff Hollobaugh will be able to make the appropriate corrections in our book” noted Moyes from Florida via email, noting the marvels of the times we live in. “Better yet for Jeff & I,” added Moyes, displaying his comedic style, “with the amended corrections maybe Mickey Turcheck will purchase our newly revised book.”

“They wanted to flip a coin,” said Baidy recently, surprised in the sudden interest in a day from so many years ago and chuckling at the memory. “He got the call and got the medal. I really don’t remember if they told me if I was supposed to get a medal (in the mail). Right after that I had to go to the high jump or something.”

Baidy – who also tied for the Class A Finals high jump championship in 1959 – had received a call earlier on this day from his long-ago opponent from Taylor Center.

“I would certainly like to meet him again,” said Turcheck. His former high school sweetheart and bride had used her smartphone to seek out Baidy’s contact information, and soon after, the two old athletes were reminiscing about the day. Turcheck pitched the idea of getting together for lunch or dinner sometime soon.

“That’s what he wants to do, and it’s all right with me,” Baidy said, noting plans after things settle down. “We’re lucky to still be alive.”

Ron Pesch has taken an active role in researching the history of MHSAA events since 1985 and began writing for MHSAA Finals programs in 1986, adding additional features and "flashbacks" in 1992. He inherited the title of MHSAA historian from the late Dick Kishpaugh following the 1993-94 school year, and resides in Muskegon. Contact him at peschstats@comcast.nejavascript:void(0);t with ideas for historical articles.

PHOTOS: (Top) The 1960 Finals championship medal, front and back, awarded to Baidy. (2) The Fleet Feet of Spring has been revised based on the latest re-discovery of a co-championship. (3) Mickey Turchek went on to compete at Western Michigan. (4) The Monroe Evening News announced John Baidy’s championship pole vault as part of its coverage of the 1960 Class A Track & Field Finals. (Turchek photo courtesy of the Turcheck famly; newspaper clipping courtesy of the Monroe Evening News.)