Sam Baustert has never allowed his size to hold him back.

Baustert may be only 5-foot-6 and 125 pounds, but the Whitehall senior has come up big over and over again – with one more track season to go.

“I’ve always been one of the smallest kids in my grade,” said Baustert, who will earn his 12th varsity letter this spring. “That just forced me to work harder, to be more focused and to prepare more.”

He was also blessed with the ability to run far and to run fast.

Baustert embarks on his senior track season as one of the top distance runners along the lakeshore. He won the 3,200 meters last spring at the West Michigan Conference meet and at the Greater Muskegon City meet.

“I expect him to have a great senior year,” said Whitehall boys track coach Kirk Mikkelson, who is starting his 25th season leading the program. “He ran 10 seconds faster in the mile at our meet at Grand Valley than he did in the same meet last year, so that’s a great sign.”

Baustert said one of the secrets to his success is choosing the right sports.

“I played basketball one season and I found out I wasn’t very good,” Baustert said.

So instead of trying to force a square peg into a round hole, Baustert pivoted to wrestling, where the 14 weight classes provide a spot for every height and weight.

He compiled a standout four-year career on the mat, culminating this winter, when he won West Michigan Conference, county and District titles at 112 pounds. He also was a quiet leader as the Vikings made a run to the Division 3 Team Semifinals, where they lost a tight match to eventual champion Dundee.

Baustert is now shifting his focus back to track, another sport where his small stature doesn’t hold him back. He will run cross country and track at Grand Valley State, where he will be following in the footsteps of his two older siblings, Kyle and Lauren.

“I feel very comfortable at Grand Valley,” explained Baustert, who sees himself specializing in longer distances in college, like his running idol, Mo Farah of England. “It’s close to home, so my family will be able to come see me run. I’m excited to be on a team with a lot of great runners that will make me better.”

That grueling, “team-first” mentality forces him to conserve energy for other races and prevents him from running his best times in his favorite event, the 3,200. That is one of the reasons he is looking forward to the Meijer West Michigan All-Star Meet on May 23 at Reeths-Puffer.

“I’ve run my PR at that meet the last two years, because it’s an individual event and I don’t have to run anything else,” said Baustert. 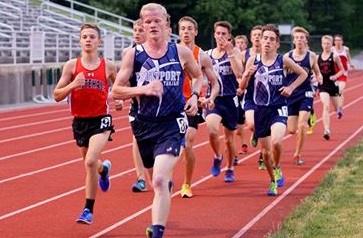 But for the most part, Baustert is a team-first kind of kid, which has made him a key part of the Vikings’ continued success. Whitehall has won or shared 15 consecutive West Michigan Conference boys track & field titles, and won more than 93 percent of its dual meets during Mikkelson’s 24-year tenure.

Mikkelson believes this year’s team has a chance to continue that WMC title streak and also make a run at snapping five-time reigning city champion Fruitport’s stranglehold on that meet’s crown.

Turrell Harris and Tyler Brandel are two of the senior leaders in the sprints, and they combine with sophomore Jaegar McGahan and senior Brett Evans on a formidable sprint relay team. Logan Thomas is strong in the pole vault, and Brandon Kallhof and Bailey Taranko are expected to contribute key points.

As for the distance events, Mikkelson said Baustert is like another coach with that group.

“Sometimes he just takes off with the distance guys, and I know that they’re in good hands,” said Mikkelson. “He’s very analytical about everything. He has the respect of all of his teammates.”

Baustert has stayed busy throughout his high school years, rarely having a day off from practice or a meet with cross country, wrestling and track. Now with less than two months remaining as a prep athlete, he knows it’s his turn to pass on what he’s learned to his younger teammates.

“It’s kind of weird being the team leader, but I guess that’s how it’s supposed to work being a senior,” said Baustert, who plans to major in electrical engineering. “It seems like I was just a freshman, trying to figure things out; now I’m the one with all the answers.”

Another place he’s always had the answers is in the classroom, with a 4.1 GPA and ranking No. 4 in his graduating class of more than 150 students.

“Sam is the epitome of what you look for in a student-athlete,” said Mikkelson. “He’s not a loud kid who is going to get in anybody’s face, but he is an inspiration to our younger kids because of how hard he works and how serious he is. He has been leading by example his whole life.”

PHOTOS: (top) Whitehall senior Sam Baustert keeps a close eye on his teammates as he waits his turn to run. (Middle) Baustert, far left, runs on the outside last season, looking for a chance to make his move. (Photos courtesy of the Whitehall boys track & field program.)