KINGSFORD — It had been a long time since a Bessemer track team was last crowned Upper Peninsula champion.

The Speedboys changed that in convincing fashion Saturday, scoring 151 points for their first title since 1951, when they were competing in Class C.

Two-time reigning champ Rapid River was runner-up this time with 84 points, and Pickford took third at 45 in the U.P. Division 3 Finals at Flivver Field.

“Last year we lost by four points after winning every meet before the Finals,” said Bessemer assistant coach Tracy Rowe. “We were pretty hopeful coming in here. Our depth helped us out.”

The Speedboys won the first four running events and finished with nine firsts.

They began their quest with a victory in the 3,200-meter relay, covering the eight-lap race in 8 minutes, 31.15 seconds.

“The 3,200 relay set the tone for the day,” said assistant coach David Rowe. “We emphasized concentrating on the present, and the guys weren’t intimidated. This is something everybody was a part of. Our cross country team (co-op Gogebic Miners) won the U.P. (Division 2) title last fall, and the distances are where we racked up the points.”

“I can’t think of a better way to end my career, especially with all my teammates,” said Tomes. “This has been our goal since last year. We wanted to come back here and take the title.” 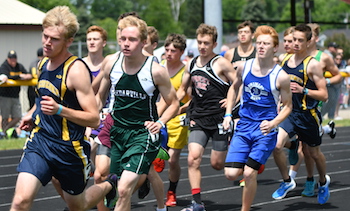 “One of the negative things is our handoffs weren’t as good as usual,” said Jett, who made up a 10-15 yard deficit in the anchor leg. “I like that distance (200 meters). I think 100 meters is a little too short, and I die a little in the end of a 400. I had a good start and used the three-step in the hurdles. I’ve been working on that, and I find it increases my speed (over the four-step).”

Junior Andy Aspinwall was also part of the 800 relay, and Tyler Busch added a first in shot put (46-6).

“We knew it would be real close with (Rapid River),” said Aspinwall. “I think they were our best competition. They’re a real good team.

“I knew I had to go out hard and tried to set the pace early,” said Bohn. “I knew there would be a lot of good runners. Bessemer especially had good runners. They have a good program.”

PHOTOS: (Top) Bessemer’s Isaiah Aili outdistances the field in the 800. (Middle) The pack takes a turn during the 1,600. (Photos by Cara Kamps. Click for more at RunMichigan.com.)