When Bradly Rainwater’s family members learned he was born blind, they decided to not put any limits on him.

As it turned out, Bradly had the same mindset.

The Davison sophomore is a pole vaulter on the track & field team. It’s an event that he took up not just because his father and uncle were former all-state pole vaulters, but because it was one of the most difficult events in any sport.

“I have always gone after the hardest things,” Rainwater said. “I thought this would be another thing that I would see if I could do it.”

Rainwater, who also is a member of the marching band and wrestling teams at Davison, recently finished his first full season competing as a vaulter and has proven that he can do it, with a personal best of 8 feet, 6 inches. But he’s not satisfied with simply clearing a height in competition – he wants to go higher.

“In the end, I’d like to go to state and get a reasonable placing,” Rainwater said of his career goals. “That would be good for me. I’d enjoy that. For someone in a situation like mine, or a situation similar, you have to work twice as hard to get things where you want them to be. But I am dedicated to it.”

Davison pole vaulting coach Brad Rainwater, Bradly’s grandfather, is also dedicated to it, and is doing all he can to help his grandson reach his goals. Brad Rainwater has been coaching for four decades, but had to teach himself some new tricks when Bradly came along.

“It’s a learning process for us, as well,” Brad Rainwater said. “We started by putting our heads together, my sons and I, and I took it basically like I would coach anyone, but we had to be more hands-on. Basically, it’s step-by-step. It’s the same way when he wrestles; they have to literally do every movement like step, step, step, step. Everything on the vault is done by steps, so we start him with doing three steps, then four steps, then five steps. We’re thinking of ways to teach him to turn, so we use a lot of rings and high bar so he can get that feel.

“What it’s done for me is made me a better coach, because I have to break everything down. Now I’m a little more technical with them all.”

Recently, Bradly began using a track on the runway to help guide his pole to the box, which allows him to start his run farther back. He’s made steady improvement throughout the season, setting his personal best May 13 during a dual meet against Flint Carman-Ainsworth and matching it two days later at the Heritage Hawks Last Chance Invitational.

During practices with a bungee cord, he has cleared more than 10 feet. He’s also started imparting wisdom on other vaulters.

“If I have young vaulters, he teaches them the first three steps and a plant,” Brad Rainwater said. “If people are around (Bradly) and they didn’t know he was blind, because he’s actually doing the drills or showing kids how to do drills, they go, ‘He’s blind?’”

Bradly said the reaction from teammates and opponents alike has been great. 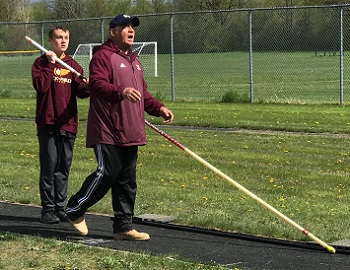 “They work with me some, like they’ll say, ‘You didn’t turn correctly,’ or ‘You didn’t do this correctly,’ which I appreciate, because criticism like that I can’t necessarily see on film,” he said. “Opponents, some of them come up to me and say thank you to me, and that I inspired them. It’s still hard for me to grasp, because I’m not as good as I should be, but I appreciate people saying that.”

While there’s no official number of blind individuals who have competed in the pole vault, it is rare.

“I know that he’s only one of maybe three others in the state (history), and the other three had some sight,” Brad Rainwater said. “We try not to limit him; we try not to put him in a box that he can or can’t do that. As far as I know, he’s one of the very few in the country that’s doing this. We love it, because we hope it opens doors for other kids that have desire to do other things.”

Bradly, however, said he hasn’t quite grappled with the fact that what he’s doing is special, as he feels he still needs to get better. That’s his focus now, and it’s reflective of someone who has played sports his entire life, from T-ball to soccer to basketball, and now wrestling and track.

He’s not a blind pole vaulter; he’s simply a pole vaulter. And when he’s done, he wants to be known as a great one.

“I’ve always had the attitude of why not,” he said. “Why not work extra hard to be as good as they are?”