With the number of elite athletes Lake Orion, Auburn Hills Avondale and Lansing Catholic have featured over the last many years, it was somewhat surprising that none had won an MHSAA boys track and field championship.

All three can check that goal off the list after earning first-place trophies for the first time Saturday.

Here's our breakdown of the best from the Boys Finals meets. It's impossible to include every highlight, of course. But feel free to comment below and tell us what we missed.

Lansing Catholic senior Zack Zingsheim gets the edge over Union City’s Chris Maye just as his team finished just ahead of Maye’s for the Division 3 championship. Zingsheim won the 800 in 1:55.97 and also ran on first-place 800, 1,600 and 3,200 relays as the Cougars finished with 68 points and their first MHSAA team championship. The Georgetown University recruit previously has been part of one MHSAA championship relay and also won the Division 3 cross country title in the fall.

Tales of the Trophy 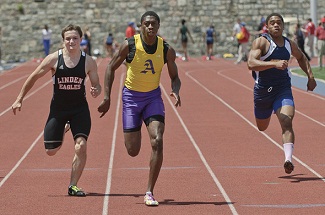 LP D2: Auburn Hills Avondale got wins from Kyle Redwine in the 100 and Nathan Chapman in the 400, plus a relay win, to edge Lansing Sexton 47-40 at the top of the standings despite two Big Reds relay wins.

LP D4: After tying for the championship last season, Albion left no question with 49 points, 13 more than Muskegon Western Michigan Christian. Albion swept the relays, with Nolen Mitchell on three of them, and he also tied for first place in the 400.

UP D1: Marquette claimed its third straight championship, this time out-pacing Gladstone by 15 points. Marquette won only three events, but got points from 14 entries.

UP D2: St. Ignace continued its reign with a third-straight championship, putting up 112 points to Stephenson’s 85. Parker Simmons won both the 100 and 200, and the team also won three field events.

UP D3: Pickford has had streaks of dominance before, but won its first championship Saturday since 1992. Jordan Lavinge was part of both event wins, taking first in long jump and running on the 800 relay.

Garret Zuk, White Lake Lakeland – His win in the 3,200 at the LP Division 1 Final was his first in track and field, but he also won the Division 1 cross country title in the fall.

Austin Sanders, Ypsilanti – Sanders had the top-seeded LP Division 1 times in both the 100 and 200, and made good by winning both.

Jake McFadden, Clare – Won both the 110 and 300 hurdles at the LP Division 3 Final to give him four championships total in his career.

Chris Maye, Union City – Carried his team to second place in the LP Division 3 Final with wins in the 100 and 200, a second in the long jump, and as a runner on the winning 400 relay. He won three titles as a junior.