LANSING – Dawson Block has his seven varsity letters earned over the last 2½ years piled on a table in his bedroom.

They aren’t in any particular order or out for display. In fact, they’re probably the most disorganized part of an incredibly organized guy’s impressive high school sports career.

As sports teach lessons, it’s obvious what the Lansing Christian junior is learning most this spring. Time management is a must when you’re playing three sports in one season, with competitions usually four or five days a week and one day to practice for all of them.

But he’s pulling it off – and then some.

In fact, the main downside – not counting the busy schedule – is that he can’t dedicate more time to all three. He’s run a personal-best in track in the 800 meters and is only a few seconds from his best in the 1,600. He’s a regular scorer for a golf team that’s in serious contention for its first league title and could make the MHSAA Finals for the first time. His return to the pitcher’s mound has included two solid outings – not bad for someone who hasn’t played baseball since middle school. And on top of it all, he’s carrying a 3.95 grade-point average as he makes academic lessons a priority while picking up more on the track, course and diamond.

“I’m a big fan of sports,” Block said. And it’s just that simple, even when scheduling gets complicated.

“I like running. I like being outside, playing golf, trying to get the swing down. And baseball is something (where) I have a decent throw, so it makes it a lot easier. I just like pitching.

“I’ve done track for a long time, and I feel I’m pretty good at it and I can’t see myself not doing it. The past few years I’ve fallen in love with golf, and I have a drive to want to be good at it and potentially play in college if I get good enough. Baseball, I’m more just there to help the team out; they need arms, so I do it for that reason.”

A spring day in the life of Block looks like this:

On days when he doesn’t have a game/match/meet, he’ll go to golf or track practice after school. If he goes to track, he’ll get done at 4:30 or 5 p.m., then head over to the driving range by himself to hit balls. Or, he could go from golf or track practice after school and catch the end of baseball practice, where coach David Miranda will work with him on pitching. Or, Block will hit track practice, then the golf range, and as happened last week, pitch to his dad Jason in their yard until it’s too dark to see the ball. If Dawson goes to golf and baseball practice, he’ll finish his sports night with a running workout. 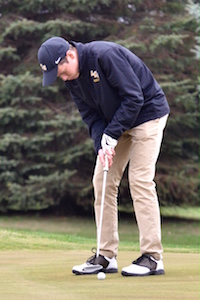 And then from about 8 p.m. until he’s done, Block takes care of his homework.

“I’ve never met a kid – and I’ve been coaching for 12 years or more at Lansing Christian in baseball, golf, basketball and soccer – Dawson is just, ever since I can remember, over the top,” said Jason Block, who in addition to being Dad is also the Pilgrims’ boys golf coach. “Whatever he’s in, he’s going to try to within reason be the best he can be. When we’d play flag football, he’d do practice and then run with a parachute after practice; he always does the extra mile.

(But) if anyone can do it, it would be Dawson. His work ethic is off the charts. It basically became a situation of we got the calendar out, (said) here’s a track meet, here’s a golf match, where are the holes? Is there any way without killing ourselves that we can make this work?”

Track and golf always were sure to be part of Dawson’s schedule. He’s competed in both all three years of high school so far. But he hadn’t thrown since middle school – although he pitched well enough back then that Miranda, who had coached against some of Block’s teams when Dawson was a kid, approached him in church a few times to ask him to join on – if only to lend another left-handed option to the pitching staff.

“I told him no for a long time,” Block said. “But then I was like, maybe this wouldn’t be bad. Maybe I can do this with the other things, just come when I can and pitch. I just decided that one day at church.”

It no doubt helped that Block had done similar juggling before. In addition to two previous years of spring dual sporting, Block was the second-fastest finisher on the cross country team that placed 13th at the Lower Peninsula Division 4 Finals in the fall, coming in 45th with a time of 17:29.6 – and balanced that sport with playing on the junior varsity soccer team.

During the winter, Block was on the junior varsity basketball team – but then also ran every night after practice to keep his mileage up for spring.

Block has run the 800 this spring in 2:13.87, his career best, and his 4:55.23 in the 1,600 at a tri-meet April 18 was fewer than three seconds off his personal record for that race. On the golf course he’s averaging 45 strokes for nine holes and shot an 86 as Lansing Christian won last week’s Duane Blatt Invitational hosted by Pewamo-Westphalia. He threw one inning Saturday in his second baseball outing after allowing only one run over multiple innings during his first. 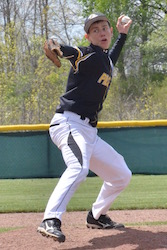 From the Dad point of view, Jason can be impressed with Dawson’s organization; his son always has his clothes laid out for the next day and hand-writes his schedule in a calendar he keeps handy. At the same time, Jason said occasionally he wishes Dawson would find time for more fun and going out with friends. But Block’s parents have made sure not to push any of these athletic opportunities on him, and the fact he continues to be a model student in the classroom is a good sign he’s making everything fit.

Anticipating three varsity letters this spring and at least four over his senior year, Block could graduate with 14 after playing more than 20 sports seasons. That pile in his room is going to get a little higher.

And so will that stack of benefits from playing so much. Along with time management, Block quickly points to patience – especially on the golf course – as a lesson he’s derived from athletics. There’s something there about bouncing back as well after a bad shot or other mistake.

And he got an interesting history lesson from one of his teachers, Eric Thomas, who told Block the story of Jim Thorpe, who won Olympic gold medals and played Major League Baseball and in the National Football League a century ago.

As noted above, the main downsides to this spring for Block have been less sleep – he’s staying up a little late getting that homework done and has to talk himself into a second wind sometimes – and the inability to be everywhere at once. He doesn’t like feeling like he’s letting any of his teammates down – and he does his best to be with all of them as much as possible.

But he’d also tell anyone interested to give three sports in one season a try.

“It can be a lot of work, a lot of struggle,” Block said. “But if you’re willing to work hard and have some determination, you can do it.”

PHOTOS: (Top) Lansing Christian’s Dawson Block races down the straightaway during a race this spring. (Middle) Block lines up a putt during a golf competition. (Below) Block throws during a baseball game Saturday, May 7. (Photos courtesy of Jason Block.)