While his teammates ran against White Lake Lakeland last Tuesday, Devin Kimberlin was inside Walled Lake Northern High School studying for an Advanced Placement exam. He had about 10 minutes to spare to run one race – and hoped Garret Zuk would help him make it worthwhile.

It’s not that the Knights sophomore thought he could beat Zuk, a senior who is the reigning Division 1 cross country champion and will run at Michigan State University this fall. But Kimberlin was coming off a career-best 10:02 in the 3,200 meters, and knew chasing Zuk would be a prime opportunity to break the 10-minute plateau.

He was right. In fact, Zuk recognized the situation, and after a short conversation during the second lap, offered to pace his opponent the rest of the way. Kimberlin finishing in 9:58.

“At that point, something clicked in my head; I can help him out,” Zuk said. “It was kind of a selfish thing, because it gave me something to do for that race. I was a little worried that my coach would care. But I said to myself, the meet is over, there’s no reason he would care. At that point, I made my decision.”

Opponents from rival schools working together for a common goal makes this a feel-good story. But another selfless act by Zuk at the end made this race one of the most memorable in Michigan this spring.

The 3,200 is the longest high school race in MHSAA competition, measuring eight laps. As Tuesday’s race neared its end, the story picked up speed as well. 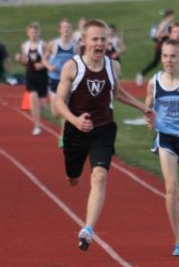 The two didn’t know each other before Tuesday. Kimberlin certainly knew about Zuk, who on top of the cross country championship has since run the 3,200 in 9:09 – which would’ve won last season’s Division 1 track and field final by 11 seconds. Zuk also this winter was named an MHSAA Scholar-Athlete Award winner, one of only 32 from across the state, and is co-salutatorian of his class.

Zuk had recognized Kimberlin from other events over the year, although it was only a chance set of circumstances that led Kimberlin to running at all. He was a soccer player when his family moved back from London last fall. But he ran in a Walled Lake Northern alumni cross country race for fun, and coach Jeff McNeil noticed his raw talent – and convinced Kimberlin to join the cross country team as well in the fall. Kimberlin just missed making the Cross Country Finals with a personal record of 16:01. He then came out for track this spring and had showed lots of potential over the season’s first month.

The 3,200 is the third-to-last event. With Lakeland already trailing by too many points to win the meet, Zuk wasn’t sure if he should go after a fast time or simply cruise through. He’d been breaking 10 minutes in the 3,200 since his freshman year, and would’ve had little problem winning this race.

Kimberlin hoped for the former.

A pack of three or four runners, including Zuk and Kimberlin, led into the second lap. Kimberlin couldn’t figure out why Zuk was hanging back. So Kimberlin took off.

His charge was fast – but not fast enough. As that lap ended, McNeil ran to Kimberlin and yelled to him his pace was about five seconds too slow to break 10 minutes.

Zuk overheard something in that conversation about “pace.” At the start of the third lap, he came even with Kimberlin and then pulled a bit in front of him.

“He looks over his right shoulder, and he said, ‘Just draft off me for a couple of seconds here.’ I was like, ‘All right,’” Kimberlin said. “He turned around again and asked what time I was going for. I said I wanted to break 10, and he said, ‘All right. Stick with me and we’ll do it.’”

In the stands, Walled Lake Northern fans were trying to make out what was going on below. Some thought Zuk might be taunting their runner. But parent Dave Routledge, whose son was a Knights standout last season, told those around him that Zuk wasn’t that kind of guy. Kimberlin wasn’t sure how to answer Zuk at first either, but decided to latch on for the ride.

At the top curve of the back stretch, Zuk and Kimberlin started lapping runners, with Zuk encouraging them as they ran by. The race – and the 10-minute pace – was on.

“What Garret did … caught me off-guard at first. I had watched him do that for different kids on our team all year. (But) that’s the type of leader that he is,” Lakeland coach Dave Browne said. “Garret is a tremendous leader and one of the best motivators by example that I have ever coached. I’m not sure MSU fully understands the tremendous individual that they are inheriting from us.”

Instead of getting slower, Kimberlin’s lap times sped up as he chased Zuk around the track. And now everyone had joined the effort.

McNeil, of course, was cheering on his runner to keep the pace. Sometime during the fifth or sixth lap, Brown pulled close to Zuk and cheered him to pull Kimberlin through.

Those in the stands had figured things out as well. Some were close to tears. All were cheering loudly as the 10-minute goal began to look possible.

Zuk continued about five meters in front of Kimberlin, who usually has a strong kick at the end – but clearly did not have as much left as usual.

Zuk did. And that would be enough for both of them.

“There wasn’t really a whole lot of planning to any of this. I was trying to figure out how to push him, and I knew we had to be quicker on that last lap,” Zuk said. “I knew he would get that last little bit of adrenaline (trying) to go ahead and catch me. With as much effort as I knew he’d put into that race, he deserved to pass me and win.”

Zuk had won every race but a few this season, when he let younger teammates go ahead of him. This time, it was an opponent following him -- but Lakeland no longer could win the meet. With about 10 meters left, he cooled his jets again and let Kimberlin charge through the finish line first.

“I couldn’t believe he was going to let me win,” Kimberlin said. “After the race, I walked up and gave him a hug and said, ‘Thank you so much.’ He was just like, ‘No problem.’”

“I wrote Garret an email that his character means more than it means (to be an elite) runner. And his character now shows even more,” McNeil said. “His running alone is obviously awesome. He’s just great. But he’s also got a great attitude, and I wanted to reinforce to him: Please don’t change.”

Zuk’s effort has been the talk at school, and Lakeland athletic director Greg Michaels said he was told the same is true at Walled Lake Northern. Michaels lives in South Lyon, and his neighbor, a high school runner, also had heard the story from his coach. On Thursday, Zuk was recognized by the Huron Valley Schools Board of Education.

Routledge wrote a letter to the Lakeland athletic department that quickly circulated around the school and included this excerpt:

“I watched this performance and was astonished.  To say that I was, once again, impressed by Lakeland’s Garret Zuk would be an understatement,” Routledge wrote. “Somewhere in his young life he has learned the value of humility, sacrifice, and deferential character. He understands that as a champion he is a role model and mentor.  He was a hero on this day to one young runner from Walled Lake Northern. And perhaps to all who watched.”

Kimberlin’s English teacher read the letter in class the next day. It nearly brought the runner to tears.

“It’s a great example. It’s something, down the line, I’d like to do some time,” Kimberlin said. “I don’t know if I’ll ever be as good as him. But he’ll definitely be a great inspiration along the way.”