COMSTOCK PARK – The boys on the Chesaning track & field team are emotionally spent.

A Saturday saturated with stress gave way to pure bliss as the Indians kept grinding all the way to a Lower Peninsula Division 3 championship at Comstock Park.

Their lead dwindled to a single point, 43-42, with only the 1600-meter relay remaining. The Indians finished in fifth place — the most memorable fifth-place performance, perhaps, in the program’s history.

Chesaning ended the day with 47 points, followed by Hillsdale (42) and Frankenmuth (30).

Hillsdale’s Spencer Eves made things very interesting as his 6-foot, 7-inch performance to win the high jump boosted the Hornets to within a point of the lead with one event remaining.

However, knowing exactly what needed to be done in order to finish off the team title had Chesaning’s mile relay team focused. The mission was pretty clear at that point.

“We had to beat Hillsdale,” Sam Forsyth said. “So we went to work.”

Paxton Ruddy, Hayden Giesken, Forsyth and Zach McFarlan pieced together a time of 3 minutes, 24.03 seconds for fifth place. Hillsdale was 18th and the rest is history.

Chesaning produced a critical victory in the 800 relay when McFarlan, Brady Fraiser, Brandon Keys and Forsyth crossed the line in 1:29.55.

Forsyth gained even more points for the Indians with a first-place distance of 21-6½ in the long jump and a third-place performance in the 200 (22.88). McFarlan was third in the 400 with a personal-best time of 49.32, and the 400 relay team of Anthony Aquado, Fraiser, McFarlan and Keys landed on the all-state team with a seventh-place time of 43.93.

Ruddy also cleared a height of 6 feet, 6 inches for third place overall in the high jump. 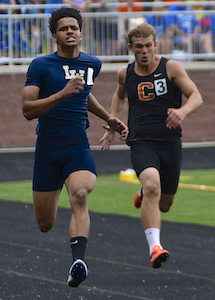 “We knew coming into the meet that we had a chance at being in the top two,” Forsyth said. “But nothing is guaranteed. No matter what you are ranked in an event, you can never completely count on anything in track.

“Today was probably the most stressful and also the most successful day of my life. I couldn’t be happier with the outcome of the meet. Winning titles in the 4x200 and the long jump is great, but bringing home the team title meant the most by far.”

There was certainly a pattern Saturday with wins coming in pairs for others in the field.

Wyoming Lee junior Thomas Robinson couldn’t be stopped in the sprints as he won the 100 in 10.84 and the 200 in 22.04. Bridgman’s Brian Patrick, a senior, dethroned defending 800 champ Anthony Evilsizor (Constantine) with a time of 1:53.81 in personal-record fashion. Patrick also went on to claim the mile championship with a dominant victory (4:11.50) that was a personal record as well.

Evilsizor, who is headed to the Marine Corps now that his high school career is over, tipped his cap to Patrick.

“I just tried to stick on his back to the end and see what happens,” said Evilsizor, whose time of 1:55.50 was a season best. “He didn’t die out. I knew he was the one coming for me. He’s put in the work. I’m not going to complain. It has been fun. I’m happy with second place.”

In the throws, Frankenmuth senior Dan Stone muscled his way to a shot put championship with a distance of 60-9¾ (personal best) and a discus title with a throw of 171-00.

PHOTOS: (Top) Chesaning's Sam Forsyth launches during the long jump, which he won to help his team to the overall title. (Middle) Wyoming Lee's Thomas Robinson holds off Forsyth and others in the 200. (Click to see more from HighSchoolSportsScene.com.)