By Dan D’Addona & Tom Markowski
Special for Second Half

ZEELAND — Led by a trio of dominant throwers, the Coldwater boys track & field team had high hopes of winning the Lower Peninsula Division 2 Finals on Saturday.

The team finished runner-up to Zeeland East last year and returned most of its point scorers.

Coldwater turned the tables and surged to the championship this time with 60 points at Zeeland Stadium.

“It means a lot. We got second last year, and we were really happy with that,” Coldwater’s Dylan Targgart said. “But we have never done this in school history. It feels really good.”

“The energy is always there when we are in the ring, and that helps us a lot,” Dylan Targgart said. “It’s fun. After each person hits their throw, we build off of each other and off of the energy that the crowd is giving us.”

Zeeland East’s Boone Bonnema was fifth (52-1) in the shot put.

“Nobody remembers who finishes second,” Aljabaly said of 2017. “Finishing second last year was a big part of what we did today.”

Aljabaly placed second in the 3,200-meter run last season and said he needed to do more this season to help his team score points. He ran the 1,600 just a few times as a junior and made a concerted effort in this event to compete with the best.

“This year the mile was my best event,” he said. “I felt, in the shorter the race, the more guts you have to have. I wanted more of a challenge this year.”

Aljabaly placed third in the 3,200 and then, oddly, ran in the next and final race, the 1,600 relay and helped Coldwater finish seventh for two more points.

“It was great seeing everyone perform,” Targgart said.

“My Regional time wasn’t very good, and I knew I had to do something different to try to win this, so I tried to bring it out way faster than I normally do, then try to have the crowd drag me through at the end,” DeJonge said. “It is tough because (the state title) as a team is what we were working toward.”

One of the more impressive athletes on this day was Thomas Robinson of Wyoming Lee. This was Lee’s first season competing at the Division 2 meet. Robinson won the 100 and 200 both of the last two seasons in Division 3, improving his times in both each time.

Robinson didn’t compete in track until his sophomore year, the same year he tried out for football. A 6-foot-1, 180-pound receiver, Robinson said he’s more of a fan in that sport than he is in track. Be that as it may, Robinson signed to run track at Michigan State.

“My football coach at the time told me I should go out for track,” he said. “He said it would make me better in football. I don’t like track as much as football. I’m just better at track. 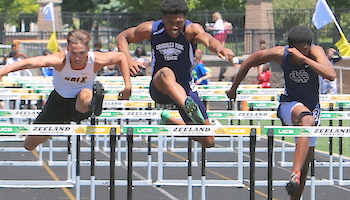 “I felt good running the 200. I am getting better. Just look at my times.”

Like Robinson, Anthony Hudson of Harper Woods Chandler Park competed in football and track. And, like Robinson, Hudson began his high school career rather late. Hudson competed in track in middle school but decided not to compete as a freshman. He ran a couple of races as a sophomore before making a commitment his junior year. Last season he placed sixth in the long jump and was second in the 200. This season he won the 110 hurdles with a time of 14.68. He also placed fourth in the 200.

He held off Zeeland East’s DeJonge (14.69) by a hundredth of a second in the 110 in one of the closest races of the day.

Hudson signed to play football at Davenport University and said he might try both sports if he can handle the load. He plans on majoring in sports management in college.

Chances are not many in the crowd expected Jacob Denison of Tecumseh to do well in the 400 run. That’s all right. Denison followed his own expectations.

“I’ve been working hard all season for this,” he said. “It’s not much of a surprise to me. It was just a lot of hard work. I knew I had to take it out fast today. I had a good coach who got me out of the block faster, and I had a lot of support from my family. I’m blessed.”

Injuries held Alex Comerford back last season as the junior from Otsego placed 11th in the 3,200. Healed by the time fall rolled around, Comerford placed second at the Cross Country Finals and won the 3,200 on Saturday with a time of 9:07.25.

“It’s something I’ve been working on,” he said. “I haven’t been finishing well, and it was really my cross country season that started things. I got stronger. I grew up.”

PHOTOS: (Top) Coldwater's Zach Gipple begins to unwind on a discus toss Saturday. (Middle) Chandler Park's Anthony Hudson, middle, stays just ahead of Zeeland East's Corbin DeJonge, left, in the 110 hurdles, which proved to be the closest race of the meet. (Photos by Janina Pollatz. Click for more from RunMichigan.com.)