OAK PARK – As good as he is as a runner, Cameron Cooper understands he can’t do it alone.

Running one last high school season guided by knowledgeable veteran coaches and with a friend to help set their team's pace, the Oak Park senior is sprinting toward a captivating conclusion to his high school career and with more exciting possibilities ahead.

Minutes after running the second-fastest time in the half mile, Cooper said he thought he could run faster – and he believes a time of 1:46 is attainable now that he’s competing outdoors.

“Outdoors, you can run faster,” Cooper said, noting there are only two turns on outdoor tracks instead of four at smaller indoor venues.

Although his times don’t reflect this outdoor advantage yet, Cooper is finding his fastest stride as the season’s most important meets draw near. Cooper has won all of his races this spring – individually or as part of a relay – and his top 800 time of 1:51.79 is only a tenth of a second slower than last season’s MHSAA championship performance.

Cooper began running competitively at the age of 8 with the Detroit PAL (Police Athletic League). He ran the sprints before his coach, Reggie Osborne, moved him to the 400 and 800 runs at age 10.

“When I was younger, it was way easier,” Cooper said. “In high school now, it’s more competitive. There (are) better runners.”

Cooper said there’s no secret to his success. Sure he’s a gifted runner, but it’s the hours of training that enable him to compete at such a high level.

His coaches at Oak Park – longtime Detroit Public School League coach Bob Lynch, now in his third season at Oak Park, and his protégé, Brandon Jiles – both work with Cooper almost daily. Officially, Lynch is the boys track coach and Jiles coaches the girls team, but in essence they team to coach both squads.

Then there’s Chris Richards, a Detroit Pershing graduate, who works with the sprinters on both teams. Although Richards doesn’t work directly with Cooper, his presence allows Lynch to spend more time with a runner like Cooper.

“Lynch’s specialty is the sprints,” Richards said. “I don’t know where, all of a sudden, he became an expert on the half mile and mile.”

That was said partly in jest. Lynch is highly regarded in the sport and has worked well with all athletes in running events whether they’ve been hurdlers, sprinters or distance runners.

Lynch has coached many greats, Olympian Marshall Dill for one, and he said Cooper is one of the best he’s had.

“It’s the work he puts in,” Lynch said. “Whatever I make him do, he does it. But I have to push him. His older brother (Corey Jones) influenced him. (Jones) was decent as an age-group runner, but he wasn’t a great runner. He worked hard to be where he was at.”

Jones ran for Lynch when he was the head coach at Detroit Mumford. Five years older than Cooper, Jones continues to have a positive influence on his brother. 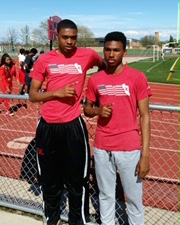 “He wasn’t that talented,” Cooper said of his brother. “He’d run a lot on his own. Just seeing his work ethic made me want to run. He still works harder than I do. I do a lot of stuff on my own, too, like pushups and stuff. Corey had to work harder just to get his times. I have more talent, so I don’t work as hard.”

Even so, Cooper, who also placed fourth in the 1,600 at the Division 1 Final a year ago, understands he needs to work harder to reach his goals.

Dewan Hawthorne is another senior on a veteran team. Hawthorne is a hurdler and also runs the first leg on the 3,200 relay. Hawthorne qualified for the Division 1 Finals in both hurdle events and placed ninth in the 300 low hurdles last season. Cooper and Hawthorne, along with sprinter KeVeon Clark, are the three athletes Lynch is counting on to set the standard for the other runners – and to score points.

Cooper and Hawthorne feed off of one another and are often seen running laps together in practice.

“Our team is stronger this year,” Hawthorne said. “We have some new guys, but me and Cameron are the big two. We both run cross country, and that helps us going into the indoor season. When the outdoor (season) comes, we’re ready.”

This season’s important meets are coming on quickly. Oak Park will host the Oakland Activities Association league meet on May 11, and the Knights will compete at the North Farmington Regional on May 19. Qualifiers will compete at the Division 1 Finals at East Kentwood on June 3.

After that, Cooper and Hawthorne plan on competing in college, and neither has made a firm commitment to a university. Cooper has narrowed his choices to Clemson, Florida, Louisiana State, Oregon and Texas A&M. Hawthorne is deciding between Michigan State and Morgan State.