There were signs it could be a special spring, going back at least a year, when the Braves finished third at the Upper Peninsula Division 1 Finals thanks in part to then-freshman Calvin Thibault winning both hurdles races.

Whitmer also took notice at the end of the fall when his cross country team finished third in UPD1 – one point ahead of annual distance power Marquette – with Gladstone senior Adam Bruce the individual champion.

The Upper Peninsula Track & Field Finals can be a little bit different game than the championship meets downstate. But Gladstone’s boys solved all the mysteries and played the Finals game well. The MHSAA/Applebee’s “Team of the Month” for May won league championships in both the Great Northern and Mid-Peninsula Conferences, then claimed their Division 1 Regional before winning its first Finals since 2013 on the first day of June.

The Braves won with 127 points, 30 ahead of both Ishpeming Westwood and Marquette – the runners-up in Gladstone’s league title wins. The Braves also broke a four-year Finals winning streak for Marquette, the UP’s largest school with 950 students – twice as many as Gladstone’s 460.

“Downstate, you can come (to the Finals) with 4-5 really good athletes and win it, because there are so many schools,” Whitmer said. “But up here, if you don’t have the numbers … when you get in with Marquette and the Sault and bigger schools, you have a different strategy. You’ve got to get as many kids in there as you can.”

Gladstone had 40 athletes on its boys team this spring. Just fewer than half – 18 – qualified for the Finals during the Braves’ 24-point win at their May 16 Regional. Of that 18, 15 placed among the top six to score in their events at the June 1 Finals.

While Marquette has owned UPD1 over the last decade with seven titles since 2010, Gladstone was similarly dynastic winning six straight from 2004-09 and then again in 2013. But compared to that most recent previous champ, this Braves team enjoyed an important variety of talented athletes – with a boost from a comeback by one of the program’s best all-time. 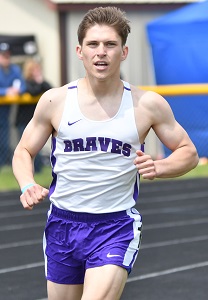 Bruce had hip surgery in January and didn’t start racing again until May. But whereas Gladstone didn’t place anyone in the 1,600 and 3,200 during the 2013 title run, Bruce won both races this time both at the Regional and Finals. He didn’t get up to speed to break his school records set in both in 2018, but still came through with 20 points at the championship meet and likely would have scored more if he’d run the 800 – the only event at this year’s Finals where Gladstone didn’t have a placer. Bruce was held out of that race to keep his still-recovering legs fresh for the others. He also didn’t run on the 3,200 relay, which without him still cut 25 seconds off its previous best to place third.

“I don’t think the kids think they could’ve done it,” Whitmer said of winning it all. “He kept encouraging them and gave them confidence there was that possibility.”

Thibault did repeat as winner in both hurdles races and took third in the 100 and second in the 200. Sophomore Blake Servant won the discus by more than five feet, and junior Luke Van Brocklin just missed breaking the school record in the 400 while finishing second in a fast, tightly-contested race. Senior hurdler/sprinter James McKnight and junior thrower Greg Chenier also placed in multiple individual events.

Gladstone won all but one of its meets this spring – finishing behind Marquette in late April at an event that allowed unlimited entries. Sadly, the Braves had additional motivation as well this season after longtime athletic director and assistant coach Matt Houle died Nov. 9. He had coached since the mid-1980s and remained part of Whitmer’s staff since the latter took over as head coach in 2002.

Whitmer had planned to retire with Houle, but not this soon. He’s eager to continue working with the program they helped build, already excited about a strong distance runner coming up and his team’s improving field events.

“I’ll be 64 this year, my wife is a family physician up here, and all six of our kids went to Gladstone High School and graduated from here,” Whitmer said. “I’m just going to keep plugging away, and I enjoy it. We have a great bunch of kids.”

PHOTOS: (Top) Gladstone poses with its championship trophy after winning the UPD1 Finals. (Middle) Adam Bruce finishes his title-winning run in the 3,200. (Photos by Cara Kamps.)