He didn’t have to worry.

The Warriors won with 68 points, exactly double the number of second-place Benzie Central, to take their first Finals title since winning Class C in 1970. Their most recent top-two finish came when they placed second in Class D in 1997.

They won it this time with plenty of help from senior Brennan Bargesser, whose blonde hair, long on top, was braided twice across the top of his skull to a small bun at the back. 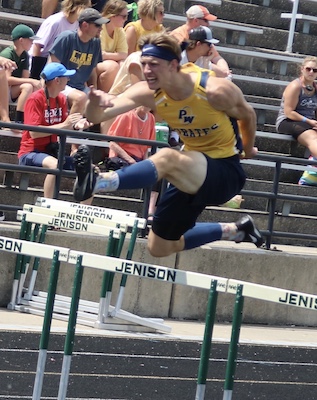 “It’s been really fun having a couple of Bargessers on the team,” Cole said of both Brennan and his sister Lexie, who keyed the Grass Lake girls team’s run to a Division 3 co-championship. “But it’s not just him. It’s been the whole squad all season long. We’ve been peaking all season long. We’ve got senior kids who have bought into everything we’ve sold them. It’s been real fun to watch.”

One of those seniors, Josh Sherwood, picked up points with fifth-place finishes in the 100 and 200 and ran the third leg on the winning 400 relay. Jack Easterday was fifth in the 100 hurdles and sixth in the 300 hurdles. Connor Vieghelan took second in the pole vault, and Trenton Holden was fourth in the discus.

“We’ve had a lot of really good seniors,” Cole said. “It’s really been their show. Every one of our kids all bought in, and it’s been fun to see.”

For Bargesser, Saturday’s meet was the culmination of a season that saw him miss time due to COVID-19 and some injuries.

“This was a dream come true,” he said. “My sister and I have dreamed about this for years, and it was really cool for us as siblings to do this on the same day.”

Bargesser, who will attend Bethel University in the fall, said his teammates were invaluable.

“I love track guys,” he said. “They’re all so nice every time. Doesn’t matter if you win or lose. Everyone is congratulating each other all of the time. It’s really nice to be around.”

As for winning the team championship, “we’ve been talking about it the whole day,” Bargesser said. “Our big goal was to get The Mitten, and we needed everyone to do that.”

The man with the aerodynamic ’do thanked God for his talent and his teammates, but also for the 10-plus mph breezes on the hottest day of the year so far. “The wind was awesome,” he said.

Pewamo-Westphalia, which tied Grass Lake for the girls title, finished third in the boys meet with 30 points.