HUDSONVILLE – One day, when a Kalamazoo Hackett Catholic Prep track championship team reunion is in order, it won’t require much effort rounding everyone up.

With only six young men representing the Irish on Saturday at the Lower Peninsula Division 4 Finals at Hudsonville, head coach Simon Cholometes’ squad scored 51 points to win it all — the program’s first championship since 1930, when it was part of predecessor St. Augustine High School before boys began attending the newly-built Hackett High School in 1964.

All six Irish athletes made the all-state team, with junior Heath Baldwin leading the way with a pair of individual titles in the 110-meter hurdles (14.83 seconds) and the long jump (personal best 22 feet, 2½ inches).

After winning the hurdles, Baldwin paced around the infield with very little emotion.

“I kind of tried to come in with a cool and calm mindset,” he said. “I knew what I was capable of in the long jump and knew what I had to do for the 110s to win it. I’m just trying to stay relaxed. I know when I get too tight, good things are not going to happen.

“I came out and didn’t jump the way I wanted to. On my third jump, I really got my hips up and got the height I wanted.”

Sand Creek finished second with 36 points, and Breckenridge rounded out the top three with 33.

Hackett teammate Gus Magnell, a sophomore, was third in the 110 hurdles (15.14), and he ran a leg on the fifth-place 800 relay along with Christian Bartholomew, Eric Smith and Wade Poling. The quartet ran a time of 1:33.89. Bartholomew, Smith, Eric Wenzel and Magnell also placed fifth in the 400 (44.71).

Baldwin then nabbed a fourth-place time of 40.75 in the 300 hurdles, and Magnell secured the final all-state spot in eighth with a time of 41.20.

Magnell credited Cholometes for a drastic improvement in technique and the motivation to put in the extra work, and Baldwin for being, well, Baldwin.

“I would not be anywhere without my coach,” Magnell said. “To have a state champion you’re racing against every race, it really pushes you to keep getting better and better.”

“Those guys have a great relationship and they really feed off each other,” Cholometes added. “It’s very healthy competition with those guys, and they want to see each other do well.”

In the discus, Hackett sophomore Henry Zimmerman recorded a third-place toss of 145-10, and he made it a double all-state day with a sixth-place distance of 46-3 in the shot put.

Cholometes is in just his second year at Hackett after serving as an assistant coach at Sturgis, where he oversaw a sprint group that set several school records.

“It has been a quick turnaround for us,” Cholometes said of the culture shift for the program. “I did think it was possible. I knew we had to go out and perform to our potential, and we did that. These guys put a lot of work in last summer and this winter leading up to the season. It was all that work coming together today. 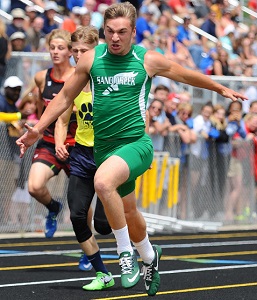 “Heath is a pretty big-time performer, and he showed that today. Our sprint relays did well, as did Henry, scoring in both the throws. To win by [15 points] at a state meet, I was really pleased with that. Typically, it is pretty close.”

The rest of the meet offered quite a variety for fans that packed the stadium. Fulton captured a title in the 800 relay after Tristan Johnston, Jon Baker, Adam Duflo and Nate Alwood combined for a time of 1:31.15. In the 3,200 relay, Hillsdale Academy’s Nick Rush, John O’Connor, Connor Oakley and Ian Calvert clocked a winning time of 8:14.88. The 400 relay title belonged to Breckenridge’s Lukas Ebright, Caleb Hurt, Hunter Collins and Caden Foster (44.00) and the 1,600 team from Concord comprised of Zeavion Jones, T.J. Kessman, Vincent Giuliano and Bryan Smith produced a first-place time of 3:30.96.

In the field events, Coleman’s Cody Finney won the discus (151-1), Sand Creek’s Cole Hallett cleared a winning height of 13-6 in the pole vault, Carson City-Crystal’s Daniel Smith had the best shot put of the day with a toss of 52-9, and Hillsdale Academy’s Peter Kalthoff was first in the high jump (6-5).

PHOTOS: (Top) Hackett’s Heath Baldwin and Gus Magnell, second and third from left, respectively, break through for two of top three places in the 110 hurdles. (Middle) Sand Creek’s Alec Muck pushes toward the finish line for one of his sprint championships Saturday. (Click for more from RunMichigan.com.)