KINGSFORD — There was reason to celebrate Saturday evening in Ishpeming as both of its track and field teams came home as Upper Peninsula Division 2 champions.

Earlier in the day, the Ishpeming boys retained their title, as did the girls.

“We had a fire truck parade through town and the booster club bought us a bunch of pizzas,” said first-year coach P.J. Pruett. “The boys ran good. One of the bigger battles we had was with the senior party (on Friday night).”

The Hematites, who swept all four places in the 800, 1,600 and 3,200-meter runs in the Regional at Manistique on May 18, again scored heavily in the distance races in Saturday’s Finals.

“We went through the Regional with four in the 800, 1,600 and 3,200, and that ended up well for us,” said Pruett. “That gave us a chance to score some points in the Finals. We were neck-and-neck with Iron Mountain until the distances. They had good runners, but we had more of them. Our depth really showed. When you get to the Finals, points are points. Our distance guys ran as a pack, as they did in the Regional.”

“It felt like everything clicked for us,” said senior Kazmine Langness, also part of that relay. “Our handoffs were good, and everybody took off at the right time. Communication is the key. The chemistry is there.” 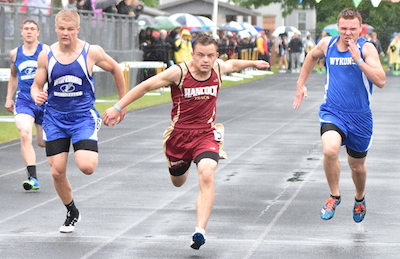 “Our 1,600 relay really took off,” said Pruett. “We were the underdog and ended up winning that one.”

“I wanted to go faster in the 3,200, but it’s tough to do when you get close to 10 minutes,” said Carey. “This is the first year I got under 10:20. I started training earlier this year (in late January) than in the past. I also did some weight training, which helped my leg strength. Running with the D-1 guys was a good motivator because I was running with the same guys I ran against in cross country.”

PHOTOS: (Top) Ishpeming’s Kyle Pruett cruises through the rain during the 3,200 relay; his team finished second in the race. (Middle) Hancock’s Alex Dewald crosses first in the 100. (Photos by Cara Kamps.)