KINGSFORD — It was a dominating performance by the Ishpeming boys during Saturday’s Upper Peninsula Division 2 Track and Field Final, to say the least, as they retained their title with a U.P.-record 164 points.

The Hematites were followed by archrival Ishpeming Westwood with 75 and Iron River West Iron County at 64.

“I’ve run my 400 faster, but had PRs (personal records) in the 100 and 200,” said Meyer. “I had very good starts, and my brother Zach who runs in college (at Hillsdale College) has worked with me. I don’t think I would have won those races without him helping me.” 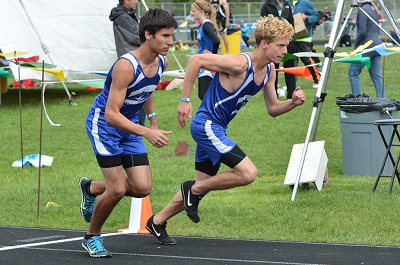 “Nate and Tommy are the backbone of our team, and we surround them with good people.” said Hematites coach Scott Syrjala. “Taking the top three places in the 800 is huge. We have a great group of seniors who are just very competitive.”

“I was happy with how everything went, although I would have liked to have kicked it in a little sooner (in the 3,200),” said Joki, who plans to attend Brigham Young University this fall. “Lance got little bit of a gap on me and I did my best to minimize that. My place was to stay with him as long as I could.”

Joki, who hopes to run cross county and track in college, liked Saturday’s cooler weather conditions better than the 86-degree heat the athletes endured a year ago.

“We had nicer weather than we had last year,” he said. “It was more comfortable for running this time.”

PHOTOS: (Top) Nate Meyer pulls ahead of the field for one of his three sprint championships Saturday at the U.P. Division 2 Final. (Middle) Tommy Potter, right, and teammate Daren Guichin take off at the start of a race; they finished first and second, respectively, in the 800, and second and fourth in the 1,600. (Photos courtesy of Cara Kamps.)