Traverse City Central boys track & field coach John Lober has a seemingly endless number of stories about athletes he convinced to come out for the sport.

The collection of pictures from teams of the past and championship trophies that adorn his office deep in the recesses of Central High School are just as impressive as the anecdotes. All are the byproduct of a legendary career coaching track that has spanned 55 years.

Lober is adding yet another milestone to his legacy this spring as he has started his 50th season of coaching at Central — a half-century of impacting runners and churning out successful teams at the school.

“If you would’ve told me I was going to be some place for 50 years when I started out here (I wouldn’t have believed it),” said Lober. “Nobody does that. I just feel very blessed that I’ve been able to do now what I’ve been doing all these years.”

Lober has maintained the same formula for coaching his teams — work hard, be responsible, do the right thing and treat others with kindness — principles he learned at a young age and the basic tenets for how he’s lived his life.

“Everything is a choice in life. You choose to be here, you choose how hard you work, you choose your attitude when you get up in the morning.”

The results have been unmistakable. One MHSAA Finals championship in 1992, 10 times finishing in the top 10, 11 Regional championships, 15 Big North Conference titles — including a current streak of 10 in a row — and five Lake Michigan Athletic Conference crowns. He has coached 54 athletes who reached an all-state level and 10 who were state champions. Six state record holders have come from Lober’s program.

Lober joined Joe Neihardt’s staff in 1969 at Traverse City High School after stints at Bellaire and in Sylvania, Ohio. He took over as head coach in 1977 and has been a fixture in the position. His focus has always been on the track & field teams at Central, but he’s been a major proponent for the sport no matter the school. He takes pride in the running successes of the athletes and coaches at the other high schools in Traverse City — Lober was right there when Central and West split into two schools in 1997 — and around the northern Michigan region.

“I’ve advocated for the sport and the student,” said Lober. “This isn’t about me. It’s about kids walking off that stage with an experience. It’s a positive experience, and we’re using our sport to educate.”

Lober has certainly done his share of work to generate increased participation in track & field. The Trojans regularly have 100-plus members, a reflection of the time he spends recruiting students to the team. 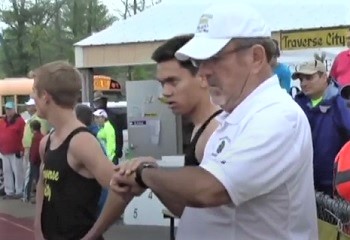 Traverse City Central junior Nathan Hullman had never run track before this season, but he had friends on the team and elected to join the program after Lober showed up in the weight room one day and started detailing all the benefits of the sport. Hullman will be a sprinter for the Trojans.

“He’s been doing it for 50 years. He seems like he knows a lot. He sounds like he’s coached a lot of good teams. I have faith in him,” said Hullman. “I hope to just learn how to run better, to get faster.”

Lober retired from teaching in 2000, but he is a familiar face around school and at sporting events. His affable personality and longevity as a coach have made him a popular icon in the community.

“He was the first person to call me when I took the job,” said Central athletic director Zac Stevenson, who came to the school in October from Battle Creek Lakeview and is the ninth AD since Lober started at Central. “The principal asked if she could share my information with everyone. Then within minutes he reached out to me via text message and welcomed me to the community, introducing himself. He is so super supportive. I have seen him at home games — boys basketball, girls basketball, wrestling meets. He’s there supporting kids and supporting staff all the time. It’s so exciting to watch.”

Lober coached cross country at Central for 28 years, too, but retired from that position two years ago. That freed him up to spend more time golfing, or watch his grandsons play football. He thought he was going to hang it up as a track & field coach last season as well, even telling then-athletic director Mark Mattson that 2018 was going to be his last year. But one day in his office, as he watched his veteran coaching staff of Don Lukens, Chris Ludka, Konrad Visser, Tim Donahey, John Piatek, Bryan Burns and Tony Moreno get ready for practice, he realized he wasn’t ready to give it up.

“I was sitting down here and the coaches are all down here and I’m seeing them talking back and forth and I thought, ‘I’m not ready to give this up,’” said Lober. “I can’t get that anywhere else in my life. If I didn’t have these guys, who are all veteran coaches, it would be hard for me to come back. We’ve had a lot of talks about that. They know what to expect from me. I know what my expectations are for them.”

The students also brought Lober back. He likes the group he has, and he looks forward to seeing how the 2019 season transpires. He likens this time of year to holding a ball of clay, then molding it into a cohesive unit that comes together and competes at a high level at meets.

“I really like taking a group of guys, bringing them together, teaching them all something and they all have their jobs, so to speak,” said Lober. “You go into a meet, and when it’s all done, we’ll see how we did. As we get into the championship part of the schedule, the first three weeks of May, let’s see where we are. Let’s see where the chips fall.”