Marquette collected 144 points to repeat and win its fifth title in seven seasons. Houghton followed with 111 points, and Kingsford tallied 72.

“We had a lot of guys step up,” said Marquette coach Kyle Detmers. “I’m proud of their effort. Hats off to Houghton. They had a great meet. I think they’ll be the team to beat next year.”

Then in the 3,200, Rambo was well ahead of the field on the last turn of the sixth lap (of eight) when he suddenly hopped off the track in a great deal of pain caused by plantar fasciitis.

Rambo’s misfortune opened the door for Escanaba junior Joey Wolfe, who won in a personal-best 9:59.78.

“It was a tragedy and a blessing,” said Wolfe. “I saw Lance go off the track and didn’t know what to think. Nate (Carey of Iron Mountain) and the kid from the Sault were right next to me. I told myself, ‘this is my chance,’ and took off in the last lap. Anything can happen. That’s why you always try to do your best. Yet, I feel bad for Lance. I just hope it wasn’t anything too serious.” 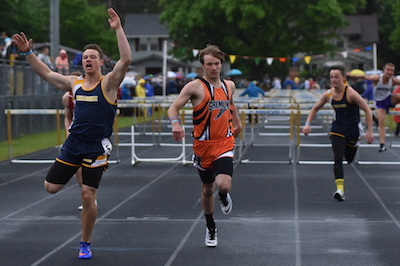 “Lance ran great races in the 800 and 1,600,” said Detmers. “Luke really helped us by taking second in the 3,200 when Lance went down. We scored about 40 points in the field events, which hasn’t been common for us. We were seeded fourth in long jump and we got second and fifth. The only disappointment we had is our 3,200 relay got disqualified.”