SANFORD — Nobody had to talk Christian Petre into playing baseball or persuade Hailey Stockford that playing softball might be fun.

Both fell in love with those respective sports early on.

But track and field? THAT took some lobbying from others to get the two sprint stars at Sanford Meridian on the oval.

Both added more titles to championship careers Friday, as each won the 100 and 200-meter sprints at the Lower Peninsula Division 3 Regional at Clare to qualify for the MHSAA Finals on June 4 at Comstock Park. Petre also ran on two winning relays, while Stockford ran on a relay that finished runner-up.

Petre was a freshman when his older brother, Mic, tried to talk him into running track.

"He saw me run during my football games and said he really wanted me to run track," Petre said. "He put some pressure on me. At first, I wasn't really sure, because the only thing I knew was baseball back then. I wasn't really sure about track. I didn't think it was a good idea. I told him 'no,' at first. Eventually, I changed my mind. I said, 'I might as well try it. I don't know where this could lead.'"

In Petre's case, it led to an MHSAA Lower Peninsula Division 3 100-meter championship among four all-state finishes last spring while he also played on a Sanford Meridian baseball team that was ranked No. 2 in the state before getting upset in the District Semifinals.

For Stockford, there was a similar reward for adding track and field to her plate in the spring. In her first year on the track, the former softball center fielder won the Division 3 championship in the 100 and 200.

Her speed became apparent when she was faster than many of the boys on the football team in a 40-yard dash in gym class. The instructor for that class was Mike Bilina, who is Meridian's varsity football and boys track and field coach.

"My time was really good," Stockford recalls. "He kept telling me I should join the track team. I'm like, 'No, I'm playing softball; I don't think that's for me.' I ended up changing my mind. I guess at the time I was thinking I wanted to dedicate everything to softball. I thought it would be best to focus on one sport."

Stockford finally came out for track one week into the season last year as a junior. She quickly caught on, winning the 100 in 12.07 seconds and the 200 in 25.11 seconds at the Division 3 Finals, just 45 days after competing in the first meet of her life.

Both became champions while juggling two sports — their first loves and their new loves. Neither has been beaten in the sprints this season as they attempt to close out their high school careers with more championships.

"The coaches are pretty understandable and communicate well with each other on what day I'd be doing what," Petre said. "It's not that difficult for me, really. I put a lot of work in over the offseason. I try to get ahead of the game before the season actually starts, so when the season comes around I can just go about it normally and not have to stress about going back and forth with each sport."

Being able to do two sports in the same season not only benefits student-athletes who are capable of handling the workload, but it benefits the teams at Sanford Meridian, which has an enrollment of 408.

"Because we're so small, if we didn't have dual sports, we'd lose a lot of athletes from one sport to the next," girls track and field coach Jenny Nosakowski said. "We're pretty open. We try to work with the coaches. We've had a lot of kids come over from baseball this year. We try to work it so both of our teams, baseball and track, will benefit."

Running in his first MHSAA Lower Peninsula Division 3 Finals, Petre cracked the top four in all four of his events to help Meridian place fourth as a team. He won the 100-meter dash in come-from-behind fashion with a time of 11.13 seconds. He anchored the fourth-place 800 relay team and third-place 400 relay team before finishing third in the 200 in 22.72 seconds.

Petre is convinced that the competition he's experienced in other sports helped him cope with the pressure of track and field Finals.

"Especially since I was on varsity as a freshman in football and baseball," he said. "Just playing on a bigger stage at only 14 years old really helped me. I was really nervous at state last year. I had a lot of adrenaline pumping. I didn't know what to expect. I feel like the past experience really did help. I wasn't as nervous as I could have been."

Running at a high level all day may have caught up with Petre in the 200, his final event. He had the fastest time in the preliminaries (22.44) before taking third. 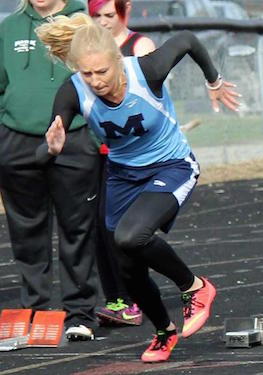 "I don't want to make any excuses," he said. "I had a long day with prelims and relays. I guess I didn't train my body as well as I could have last year, so I got a little fatigued and came up a little bit short. I didn't run the race I expected in the 200."

Coming up short in the 200 wasn't the biggest disappointment on that day for Petre. In the middle of the meet, he learned that his baseball teammates were upset, 13-8, by Beaverton in the District Semifinals. The Mustangs had a 29-6 record going into that game.

"I was really hoping to come back after states and play with my team," Petre said. "It did kind of put a little downer on the day, but it was what it was."

Petre made a different decision the previous year, opting to play in the baseball Districts rather than run in the track and field Finals. He helped the Mustangs win the District championship before they lost in the Regional Semifinals, 3-2 to Cass City. The track and field team, meanwhile, won the MHSAA Division 3 title.

"It was tough, because at that point I was still new to track," Petre said. "I didn't really know what was going on. Back then, I always said baseball would be first; that's what I decided on that day."

There is a chance that Petre could compete for two MHSAA championship teams this spring. The baseball team has a 25-1 record and is ranked No. 3 in Division 3. The track and field team has been in the top four at the MHSAA Finals the last two years.

"We've talked about it ever since the beginning of both seasons," Petre said. "It's crazy to think that could happen. As of right now, we have to keep working on the little things and keep moving forward, so when it comes time to do this, we're ready to compete."

Petre's speed was also put to good use as Meridian's starting quarterback the last four years. Petre led Meridian to a school-record 10 victories last fall. The Mustangs won their first 10 games before losing to eventual Division 6 champion Ithaca in the second round. He had a 30-10 record as Meridian's quarterback, having been promoted from the junior varsity early in his freshman year.

"I was the head JV coach," Bilina said. "He was taken from me in Week 2. We knew he was a special athlete early on. He was just faster than everyone as a freshman. He was forced into a position where he had to go up a little bit quicker. He handled it very well. He's the winningest quarterback in Meridian history. He's received a lot of individual and team honors. He's in the history books here at Meridian, that's for sure."

Petre, a center fielder and pitcher, isn't sure which sport he'll play in college.

"I have a preferred walk-on to Northwood for football," he said. "Davenport has offered me for track. Saginaw Valley is still talking to me for track. I'm going to see how the summer plays out for baseball."

Petre legged out four triples in a doubleheader sweep of Gladwin on Tuesday, including two in the first inning of the opening game. For the season, Petre is hitting .541 with six triples, a homer, 22 RBI and 40 runs.

As one could imagine, stealing bases was a big part of Stockford's game on the softball diamond.

"A lot of teams we play pretty much expect it," said Stockford, who was a center fielder.

Stockford also played volleyball at Sanford Meridian, but softball had always been her favorite sport.

"I played since I was little in T-ball," she said. "My dad was a really good baseball player, so it was just in the family. My brother and sister also played."

"A week into the season, I just got the urge to run it," Hailey said. "My cousin was on the team, and I'm really close with her. I figured it'd be a good year to try it if I was going to. I had been told I was fast. I knew I was fast based on stealing in softball."

Less than seven weeks after getting started in the sport, Stockford found herself on the track at Comstock Park as a championship contender in both sprint events.

"You never know what to expect, especially it being my first year running, but that's obviously the outcome I was hoping for," Stockford said. "I just wanted to go in there and see what I could do.

"It's a great atmosphere. It could be overwhelming. There are a lot of schools there. You know how important the meet was. It was a different experience, but it was fun. In every other sport I played, you relied on your teammates. Being there in an individual sport in such an important meet was different for me."

Stockford has never been beaten in the 100 in her high school career, losing in the finals of the 200 only three times. Her talent caught the eye of Saginaw Valley State University, which offered her a track and field scholarship. So, the girl who thought of herself primarily as a softball player will be competing in a different sport on the college level.

"I had coaches talk to me about playing softball in college, but I see potential in myself in track," Stockford said. "I've done good so far. I'm hoping to get better and see how I can do. I thought it would be something I might regret if I didn't try it."