Beadlescomb will finish his high school career next month all over the Algonac record books and MHSAA champions lists as well. He won the Lower Peninsula Division 2 cross country championship each of the last two seasons and also won the LP Division 2 track title in the 1,600 last spring. His time in the 1,600 that day set a school record of 4:13.58, and he added his school’s 3,200 record of 9:03.68 in finishing first at the prestigious Saline Golden Triangle Invitational on May 6, earning him the Michigan National Guard Performance of the Week for May 2-8.

The 9:03 was thought to be the fastest time in the state in the 3,200 this season – but was matched by a 9:03 the same night by Corunna’s Noah Jacobs at the Cavalier Classic True Team Invitational. Beadlescomb finished fifth in the 3,200 at last year’s MHSAA LP Division 2 Final, as Jacobs won the race, and he intends to run against Jacobs in both the 1,600 and 3,200 at this season’s Final, June 4 at Zeeland.

Beadlescomb also has run the 400 in 51.8 seconds this season and the 800 in 157.7; that 800 time would’ve finished seventh in LP Division 2 in 2015. His improvement during high school was impressive, especially in cross country; Beadlescomb finished 138th in LP Division 2 as a freshman before jumping to 12th as a sophomore and then winning his final two seasons. Boasting a 3.3 grade-point average, Beadlescomb will study and run next at Michigan State University, where he’ll major in mechanical engineering. He also recently was one of 12 finalists statewide for the Detroit Athletic Club’s annual Michigan High School Athlete of the Year awards, which are given to one female and male to recognize both athletic and academic achievement.

Coach Mark Simms said: “Morgan has a tremendous drive and work ethic. He does not accept finishing second and drives to be the best he can be. Morgan is the most talented track athlete that I have been associated with in my 22-year career. Morgan has left his mark here at Algonac High School. His track records will probably stand for years to come.”

Performance Point: “I remember I took the race out too fast, and that made the entire race difficult. It was hard to hang in there the whole time. But my coaches were there the whole time cheering me on and motivating me, some kids from Michigan State were there watching old teammates and cheering me on, and my parents were too. (The atmosphere) helped motivate me while I was running, for sure. There never really was a silent part of the track.” 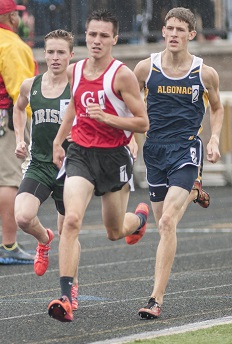 Finish strong: “I’m hoping to place top in the nation in the mile or 2-mile; I’m leaning more toward the 2-mile. I’ve got more national goals than I have had in the past. The state meet is going to be difficult because I’m going for the mile/2-mile double. In the mile (1,600) there are two kids under 4:20, but if I play it smart I think I can win that. The 2-mile (3,200) is really difficult (because of) Noah Jacobs. He’s so smart, he knows how to run, he doesn’t get too excited. It’s a battle against him, but I always look forward to it.”

Racing Jacobs: “It’s nice because we’re not at each other’s throats. We like each other, we’re friends, and it’s nice to race against him. It’s a healthy competition. Every sport, I think most kids are like that, especially in high school. Most sports, I've found, kids get along with the other athletes, especially when they get more toward the top, the elite teams. It’s nice to share experiences. We learn from each other.”

Morgan in motion: “I’ve always loved working on moving things. I grew up racing motocross, and I love not only riding but working on the motorcycles. I love learning about cars. If it has a motor, it’s my thing.”