Bandel could’ve been a selection most weeks this season; the spring has included that many highlights for the reigning Lower Peninsula Division 1 champion in shot put and discus. He was perhaps most dominant at his Regional on May 20 at Lake Orion, winning shot put by 16 feet with a toss of 63, 7 inches, and discus by  nearly 28 feet at 189-2 to earn the Michigan National Guard Performance of the Week for May 16-22.

Bandel went on to win the Oakland County Championship titles Friday in both at 67-2½ and 192-0, respectively, and his top throws this spring are that shot put and a discus toss of 204-2 on April 23 at the Oxford Invitational. He will compete in the LP Division 1 Finals this weekend with opportunities to break the all-Finals records in shot put (Todd Duckett, Kalamazoo Loy Norrix, 64-0½, 1999) and discus (Cullen Prena, Walled Lake Central, 210-1, 2012). Prena is among those Bandel has consulted for advice as he’s improved significantly over the last few seasons; his top throws in 2016 are six feet better in shot put and 11 in discus from a year ago.

The 6-foot-4, 230-pound senior also played goalkeeper for Oxford’s varsity soccer team the last four seasons and will be the second sibling from his family to play at the Division I college level; he’s signed for track & field with the University of Florida, while his older sister Darien plays volleyball at Oakland University. Connor also played basketball as a freshman and carries a 3.3 grade-point average; he’s considering majoring in chemical or biomedical engineering.

Coach Matt Johnson said: “The number one thing Connor brings is (his example) that track and field is a year-round event, from conditioning to weight training to building camaraderie with his teammates around the track. … He’s a dedicated athlete, he sets goals for himself, and that would be a value set that I’d say could be passed on to another level of student. He’s not just setting benchmarks for things within reach; he’s setting dreams he’s going to work toward. Early on last year, he told me he’s aiming not for the state record, he’s aiming to become an international competitor, and that raises the bar right there. Most high school kids are not even thinking (about that) at that point.”

Performance Point: “I’m trying to improve every meet; that’s always the goal. But this past week I started to improve more. I’m constantly moving the benchmark forward a bit. … Sometimes I just can’t really explain how much emotions I'm feeling when something (like a personal record) just happened. When you PR something that you’ve never reached, it’s just so satisfying to actually do that.”

Expert advice: “The biggest thing with (my sister) was her type of dedication and trying to do the same thing as her. Another big thing was the recruiting process; it was nice to have a sibling because not only did I get to learn from her but my parents got to learn a lot from her about the questions to ask coaches and that kind of deal. (From Prena), I learned definitely technique from him; it’s nice to have him having worked with his college coach, because … then he could teach me a lot of what he had learned. I always ask him about summer track, nationals and international competition. Even though he hasn’t gone to an international competition, he went to meet qualifiers for those, and if I have questions about what the atmosphere is like, things like what I need to bring, he’s always a good resource.”

The mental game: “For me, it’s not to get really tense. If I get really tense, really focus on trying to throw as far as I can, I’m not going to throw as well. The more relaxed you are, the longer you’ll be, the more comfortable you’ll be. Not getting tight and seized up and that sort of deal, that’s the biggest thing to me, to really relax … and trust what I’ve been doing the last couple of years, be comfortable and have fun with it. If you have a smile on your face, you’ll probably throw farther … (and) I’m just trying to throw farther than I did before.” 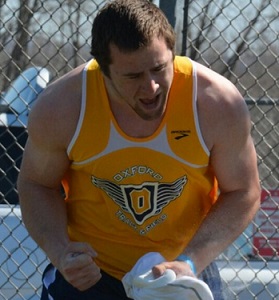 Final countdown: “I’d definitely, now that I’ve won (in 2015), I would like to re-break the shot put record, and I would like to break the discus record for the first time. I really want to hit my goals; I wrote them down before the season, and I’m still on pace. I feel like breaking 79 (feet in shot put) and 215 (in discus) before the season is over, that would be absolutely fantastic.”

Create and explore: “I’ve always really been into math and science, always really liked the engineering aspects of creating and exploring new ideas. I thought with how much petroleum that the United State is using, and with how many athletes have injuries, I thought it would be cool to create new ways to produce energy, or for athletes the fastest ways to recover.”

PHOTOS: (Top) Oxford's Connor Bandel unloads a shot put during a meet this season. (Middle) Bandel is the reigning champion in both the discus and shot put in Lower Peninsula Division 1. (Photos courtesy of Connor Bandel.)