The reigning Lower Peninsula Division 1 champion in the 300-meter hurdles, Harris put himself in position to challenge for multiple titles at next weekend’s MHSAA Finals with wins in both the 300 (38.71 seconds) and 110 (14.23) at last week’s Regional at East Lansing, earning him the Michigan Army National Guard “Performance of the Week.”

Harris’ winning 300 time was his season best, as was his 14.14 prelim time in the 110. Also an all-league football player during the fall and starting guard in basketball, Harris is among the state’s elite on the track and undefeated in both hurdles races this spring despite getting a slow start after hurting his right ankle in his final basketball game this winter. As noted, he won the LPD1 title in the 300 last season in a personal-record 37.81 seconds and just missed the double finishing seventh hundredths of a second behind East Kentwood’s Job Mayhue in the 110. Harris also finished second in the 110 and third in the 300 at the LPD2 Finals as a sophomore, and qualified for the LPD2 Finals in both races as a freshman, earning seventh place in the 110.

The 37.81 at last year’s Finals and the 14 flat he ran in the 110 at the 2018 Regional are Waverly school records – which says a lot as the Warriors have produced a number of state contenders over coach David Pike’s 29 seasons leading one of mid-Michigan’s strongest programs. Harris will announce next week where he’ll continue his academic and athletic careers at the collegiate level – he has Division I and II opportunities – and will bring both first-class hurdling skills and a 3.6 GPA with aspirations of studying kinesiology and becoming an athletic trainer.

Coach David Pike said: “Keshaun’s success in the hurdles is due to his focus on getting better every day. He’s always the last one off the track, taking time each day to get the repetitions he needs to become fluent with each motion. The quickness and fluidity of his hurdling action come from years of focused practice. That’s not to say he’s hurdling 365 days a year. In fact, much of his success in track and field comes from his involvement in other sports. Football has helped him develop the strength and toughness needed to run through hurdle contact. Basketball with all of its jumping and rapid changes of direction has helped him become a more explosive and kinesthetically aware athlete. In the end, the bottom line is that Keshaun’s dedication to daily incremental improvement as an athlete has put him in position to compete for the state title in both the high and 300 hurdles.”

Performance Point: “Nobody really knew this but my coach, but I was sick,” Harris said in recalling the Regional. “I was pushing through it, so I just went out there and ran my best races of the season. I was dealing with the flu. .... Before the race I had to hydrate a lot. My body was a little weak. I had to make sure I got my body moving, got in a good warm-up, stayed loose and warm. I just went out there and gave it everything I’ve got and ran my best.”

Remembering runner-up: “(Last year’s 110 Final) has been in the back of my mind since it happened last year. My goal is still to be the state champion in both the 110 and 300. That’s been the goal since I came to Waverly, since I’ve been a freshman. That’s always been the goal, and always been a motivation too. … Last year I wasn’t as good with my form as I am this year. So this year as I go into this last week, I’m just working on form, getting over hurdles and getting back down quick and keeping everything tight.” 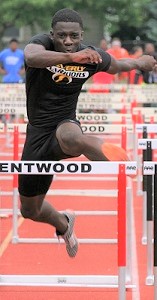 Multi-sport mechanics: “I think (all my sports) work together, because I’m always active doing something. Even in the winter or the summer, I’m always doing something. When track season comes around, I’m already in shape, and I’m already feeling good and strong. (Track has) made me even faster on the court or the field. I’m very elusive. I’m very flexible. So it’s helped me in a lot of areas.”

Looking up, looking ahead: “Aries Merritt, he’s an Olympic champion, and Grant Holloway goes to Florida and he’s another guy I look up to. I also look up to guys I ran against – Kentre Patterson (East Lansing), Noah Caudy (Lake Odessa Lakewood), even Job Mayhue who beat me last year. I still look up to all those guys, figure out what they’re doing and how I can input it into my hurdling. In track, you run against these guys so much. Once they’re gone, you’ve built a relationship with them, so it’s cool.”

Staying in sports: “I just like working with athletes and just being around sports, so I think (trainer) would be the perfect job to do. Actually, at the start of this season I had an ankle injury, I sprained it during my last basketball game, and that had me out for a month. As I worked with the athletic trainer at my school, I developed a love for wanting to become an athletic trainer and wanting to study kinesiology.”

PHOTOS: (Top) Lansing Waverly's Keshaun Harris charges toward the finish during last season's Lower Peninsula Division 1 Final in the 300 hurdles. (Middle) Harris clears a hurdle during the 110 championship race in 2018. (Click to see more from RunMichigan.com.)