Pick a division – any of seven Saturday – and you’re bound to find a senior standout finishing his career at the MHSAA Boys Track & Field Finals.

Michigan high schools regularly graduate star-loaded classes in this sport – but with reigning champions headlining lineups all over the Lower and Upper Peninsula this weekend, this grand finale guarantees to be memorable.

Below is a look at some of the teams and individuals to watch at Saturday’s boys meets. All events begin at 9 a.m. local time on both peninsulas.

Click for meet information including all qualifiers. Check out MHSAA.tv for live streaming of running events from both peninsulas, available with subscription and beginning at 10 a.m., and come back Saturday night for results as they come in and coverage of all seven meets on Second Half.

Team forecast: East Kentwood has won the last two LPD1 championships and seven of the last 10. The Falcons look like significant favorites again with the fastest Regional times in the 400, 800 and 1,600 relays, top-five times in five individual races and contenders in at least three field events.

Detroit Renaissance’s Dylan Brown: The junior sprinter ran the top Regional time in the 200 (21.69) and second-fastest in the 100 (10.75) and also runs on two contending relays. He was part of the winning 800 relay and finished fifth in the 200 last season for Detroit Martin Luther King.

Lansing Waverly’s Keshaun Harris: The reigning 300 hurdles champion is seeking to sweep those races after finishing a close second as well in the 110 race last spring. He had the fastest LPD1 Regional time in the 110 (14.23) and sixth-fastest in the 300 (38.71).

Team forecast: The LPD2 Finals have seen 15 schools win the championship at least once over the last 16 seasons. Zeeland West might the favorite this time, after also winning in 2014, with big scoring possible in the hurdles, middle and distance races, long jump and at least three relays.

Otsego’s Alex Comerford: Last season’s 3,200 champ will look to finish his high school career with a pair of titles after running the second-fastest LPD2 Regional time in that race (9:25.94) and fastest in the 1,600 (4:18.41) – although he faces strong competition in Corunna senior Ben Jacobs and East Grand Rapids junior Evan Bishop.

Saginaw’s Tony Martin: The reigning long jump champion went over 26 feet during a regular-season meet, which would break the all-Finals record by two feet. He won his Regional at 21-10.25, the second-best jump in LPD2 Regional competition behind the 22-3.5 of Hudsonville Unity Christian junior Isaac TeSlaa.

Coldwater’s Dylan Targgart: Coming off a sweep of the throws last season as a sophomore, Targgart had the best tosses in both the shot put (61 feet) and discus (166-8) at LPD2 Regionals. He should make a run at the LPD2 Finals shot put record of 61-8 set by Ogemaw Heights’ Anthony Zettel in 2011.

Team forecast: Similar to LPD2, this division has seen nine schools take turns winning the last nine championships (although three schools have come in second at least twice during that time). Berrien Springs was the runner-up a year ago and should put up some points – but keep an eye out for Pewamo-Westphalia and Saugatuck. P-W should contend in the throws, sprints, middle distance and at least two relays, while Saugatuck – the Division 4 champion or co-champion three of the last six seasons – has the favorites in both distance and hurdles races.

Saugatuck’s Brad Dunn: After taking third in the 110 and fifth in the 300 hurdles last season, Dunn had the top LPD3 Regional times in both this spring as a senior at 14.66 and 40.18 seconds, respectively.

Saugatuck’s Corey Gorgas: After sweeping the 1,600 and 3,200 last season as a junior, Gorgas is favored to do so with the top LPD3 Regional times of 4:19.24 and 9:43.98, respectively – although 800 favorite Jeremey Kloss from Harbor Springs should be right there with him in the 1,600, as should Caro star Yami Albrecht.

Grandville Calvin Christian’s Caleb Schutte: The senior sprinter won the 100 last year and was on the winning 400 relay as a sophomore. He enters this weekend with the second-fastest LPD3 Regional time in the 100 at 11.01 and the fastest in the 200 at 22.24.

Berrien Springs’ Sam Spaulding: The reigning high jump champ won his Regional at 6-2, which ties him for fifth among all LPD3 Regional performances. He’s gone 6-5 this senior season, which would put him one inch shy of the best qualifying mark.

Kent City’s Giovanni Weeks: Another reigning champion looking to go out on top is Weeks, who won the 200 last season and finished just behind Schutte in that race (22.34) and also in the 100 (11.08) at the Regional. His winning Regional long jump of 21-3.5 was fourth in the division for all Regionals. 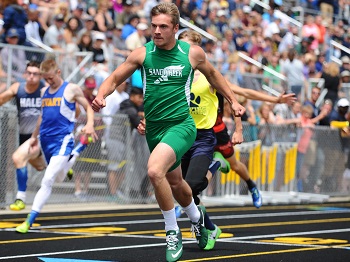 Team forecast: Hackett won its first MHSAA Finals championship in this sport last season, and Addison could become a first-time champ with at least one competitor in all but one race and three of five field events. Hillsdale Academy could be that team this weekend too with favorites in at least three events and a solid contender in a fourth. Breckenridge is another possible first-time champion with the possibility of earning big points in the throws, distance races and sprint relays.

Kalamazoo Hackett’s Heath Baldwin: After winning the 110 hurdles and long jump last year, Baldwin will make a run at four championships in his last high school meet. He had the second-fastest LPD4 Regional times in the 110 (15.06) and 300 hurdles (40.63), tied for the fourth-highest high jump (6-3) and also won his long jump at 20-0.5.

Hale’s Patrick Harris: The champion in the 400 the last two years just missed qualifying in that race but will cap his high school career running the 200 and on a relay.

Sand Creek’s Alec Muck: The senior sprinter is one of the biggest stars competing, regardless of division, as he looks to add to his five championships including with a fourth straight in the 200. His 200 Regional time (22.85) came in fourth overall for LPD4 and his 100 time of 11.04 ranks second as he looks to win that title for the third straight season. He’s also part of the fastest 400 relay (44.44) coming off LPD4 Regional competition.

Carson City-Crystal’s Daniel Smith: The reigning shot put champ had the second-longest toss during LPD4 Regionals at 51-11.25, but again must contend with another senior, Breckenridge’s Brennan Waslusky (54-9.5) after finishing second to him at that meet two weeks ago.

UP Division 1 at Kingsford

Team forecast: Gladstone will attempt to break Marquette’s four-year hold on Upper Peninsula Division 1 after coming in third a year ago. The Braves had 10 event champions at their Regional to Marquette’s four in the same meet.

Marquette’s Raphael Millado: The senior standout won both the long and high jumps last season and enters with the best UPD1 Regional showings in both at 19-11 and 6-2, respectively. He also had the fourth-fastest 200 qualifying time (24.12).

UP Division 2 at Kingsford

Team forecast: Ishpeming is the reigning champion and has won four of the last five UPD2 titles, with Newberry defeating the runner-up Hematites to claim the championship in 2017. They competed in and won separate Regionals two weeks ago, but on paper Newberry appears to have the upper hand.

UP Division 3 at Kingsford

Team forecast: Bessemer last season won its first championship in this sport since 1951 and should be in the mix again with the top performers from all UPD3 Regionals combined in nine events. Rapid River was the runner-up in 2018 after two straight titles in 2016 and 2017.

Bessemer’s Tyler Busch: The reigning shot put champion will look to repeat as a senior, entering with the best toss from UPD3 Regionals at 46-6.

PHOTOS: (Top) Stephenson’s Montel Glover, right, finishes just ahead of L’Anse’s Foster Miller in the 200 at last season’s UP Division 2 Finals. (Middle) Sand Creek’s Alec Muck powers through for one of his sprint championships in LP Division 4 last spring. (Click to see more from RunMichigan.com.)