Predicting the outcomes of MHSAA Track & Field Finals can be quite a leap.

But here's a semi-reliable forecast after hours of poring over the qualifiers for Saturday's seven boys meets: Expect plenty of close competition as a number of teams have the singular standouts needed to push them into championship contention. 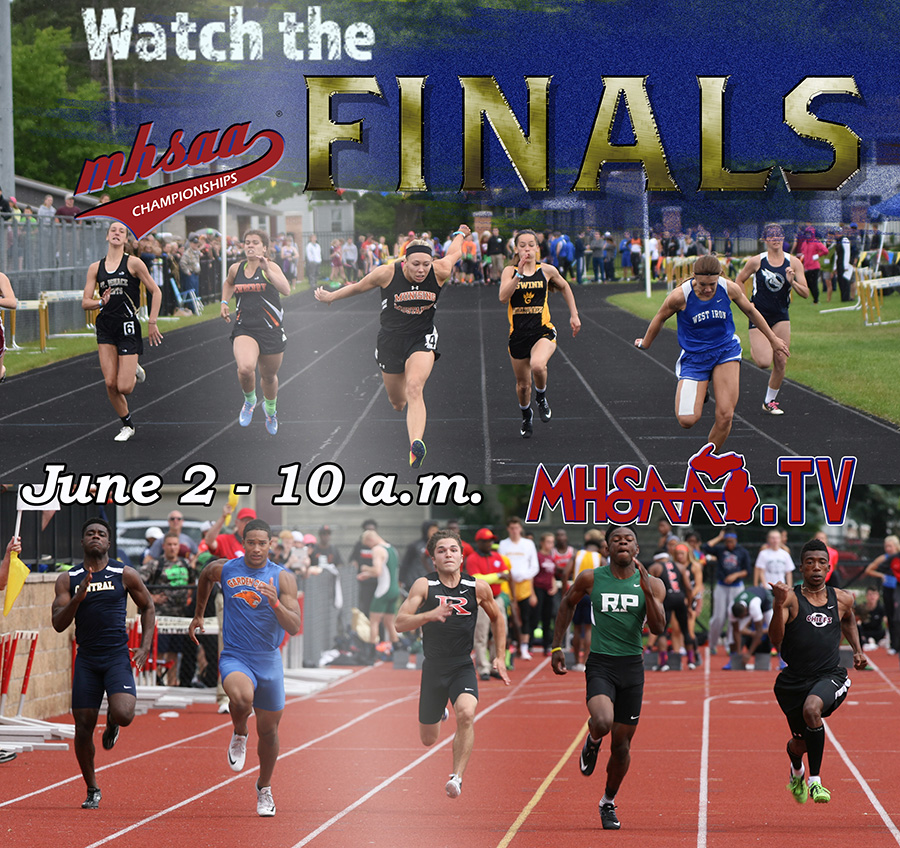 Below is a look at some of the teams and individuals to watch at Saturday’s boys meets. All events begin at 9 a.m. local time on both peninsulas.

Click for meet information including all qualifiers. Check out MHSAA.TV for live streaming of running events from both peninsulas, available with subscription, and come back Saturday night for results as they come in and coverage of all seven meets on Second Half.

The MHSAA Track & Field Finals are presented by the Michigan Army National Guard. (All times/measurements referenced below were achieved during Regional competition.)

East Kentwood is the reigning champion and has won six of the last nine LPD1 titles, doing so last year by 16½ points. Rockford was second and Oak Park third, and both could figure prominently again into Saturday’s final result.

Rockford: The rival Rams might have the best chance of catching East Kentwood. Senior Cole Johnson is the reigning 1,600 champ, and he’s seeded sixth in that race (4:20.02) and fifth in the 800 (1:55.59). Senior Gavin McIntyre is seeded second in the discus (157-1), and all four relays will run with multiple having a chance to break into the final heat.

Zeeland East claimed its first championship in the sport last season, by 29 points over runner-up Coldwater. Those two appear to have the best chances of pushing for the title again, with a few others including Chelsea also in a possible mix.

Coldwater: Last year’s finish was Coldwater’s first among the top two at a Finals, and many of the key contributors are back. Senior Shuaib Aljabaly took second in the 3,200 last season and will return for that race and as the top seed in the 1,600 (4:13.9). Throws have been another area of strength, and sophomore Dylan Targgart is seeded first in both the discus (165-10) and shot put (59-4), with senior teammates Zach Gipple (56-3) and Cole Targgart (53-2½) seeded second and fourth, respectively, in the latter. Both Targgarts placed in the discus last spring. Senior Adam Bailey also has a second seed, in the 300 hurdles (40.0), after finishing sixth a year ago.

Fruitport’s Cameron Oleen: He won the 400 last season as a junior and enters as the second seed in that race (50.39) plus will compete in the 800.

Five of the last six seasons have seen a first-time champion in LPD3. The last three seasons also have seen three straight runner-up finishes by Hillsdale (also seeking its first title). Saugatuck, Berrien Springs, Clare and Hanover-Horton are among teams that appear to have enough in what could be a low-scoring meet. Of those three, only Clare has won an MHSAA Finals in this sport – in 2000.

Whittemore-Prescott needed only 36 points last season to win its first championship in this sport, and the scoring could be that spread out again. If that’s the case, Addison, Kalamazoo Hackett or Hillsdale Academy might find itself contending as well. Hillsdale Academy was fifth last season, but only 10 points off the lead.

Addison: The Panthers will go after their first championship in this sport. Senior thrower Donovan Underwood is seeded first in discus (152-2) and fourth in shot put (46-½). Senior Dakota Knieper is seeded second in the 200 (50.74), and a handful of others are seeded in the 5-8 range of their respective events. All four relays are seeded seventh or higher, led by the third-seeded 800 (1:34.71).

Whittemore-Prescott: With competitors in 10 individual events and two contending relays, the Cardinals will have an opportunity to repeat. They won last year without a champion in any one event and enter Saturday without a top seed. But the 800 relay is seeded second (1:32.60) and the 1,600 relay is seeded third (3:34.18).

Harbor Beach’s Daniel Lanfear: He’s back as a senior to aim for a repeat in the high jump.

Sand Creek’s Alec Muck: The junior sprinter has three individual championships over his first two seasons and is seeded first in the 100 (10.77) and second in the 200 (22.11).

UP Division 1 at Kingsford

Marquette is aiming to extend its UPD1 Finals winning streak to four straight seasons after finishing more than 50 points better than runner-up Iron Mountain a year ago. Houghton, however, finished only 3½ points out of the second spot last year and will make a push for its first team championship since 1992.

Marquette: The Redmen’s massive win last season came with only two individual champions. Only two individuals and two relays are seeded first for this weekend; junior Raphael Millado has the top spot in high jump (6-7) after finishing runner-up a year ago, and junior Mathurin Gagnon is first in the 800 (2:03.66).

UP Division 2 at Kingsford

Newberry is the reigning champion after breaking Ishpeming’s three-year winning streak last spring. However, the Hematites finished second and may be the team to beat – although they’ll now have to fend off Iron Mountain again. The Mountaineers were the 2016 runners-up, then finished second last year in UPD1.

Ishpeming: The Hematites have only two top seeds, but 11 among the top three – and that depth should pay off. Those number one seeds belong to sophomore Jonah Broberg in the 800 (2:10.32) – who is followed in that race by senior teammate Kyle Pruett (2:11.79) – and senior Hart Holmgren in the long jump (19-2½).

UP Division 3 at Kingsford

Rapid River will compete for its third straight team championship after edging Bessemer by four points at last year’s Finals. A Bessemer championship would be its second ever – and first since 1951.

Rapid River: Three returning individual champions give the Rockets a substantial start on their three-peat attempt. Senior Luke Gustafson won the pole vault last season and is tied for the top seed (11-6). Senior Logan Hardwick won the discus and is the top seed in that event (154-9) and the second seed in the shot put (45-9). And senior Lucas Sundling took first in the 400 in 2017 and is seeded first in that race (53.94) and the 100 (11.54) as well.

Pickford’s Nicholas Edington: He’s aiming to repeat in the high jump and is among those tied for fifth seed at 5-8.