How could the aptly named Speedboys, whose logo is a winged shoe, not win a track & field meet?

They did just that Saturday at Kingsford High School's Flivver Field.

Bessemer's 136 points were enough to comfortably win its second straight UP Division 3 Finals after taking second place in 2017.

Lake Linden-Hubbell was second this time with 67 points, edging Brimley by a point for the runner-up spot.

"They've done excellent. We have done well for the past few years," Bessemer coach Tracy Rowe said. "We took first place last year, lost by four points the year before. They're a really dedicated group of boys.

“A lot of it starts with these kids in cross country, basketball, football. They're just really good athletes. It's just not one person. You can have one student or one athlete and you're not going to win. Of the 13 who made it, all of them except two or three were doing four events. That's phenomenal. They're multi-talented."

Rapid River took fourth with 60 points, and Powers North Central was fifth with 42. 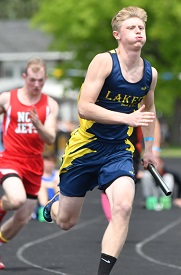 "The 800 took some of the wind out of me," Aili said. "This is my last day of high school running. It's definitely a good way to end. This means the world to me. We have such a small school, and the younger kids look up to me. Now they know what's possible."

Jamie Jett gave the Speedboys wins in the 110 and 300 hurdles. He also took fourth in the 200 and fifth in long jump.

"Have fun. We told them have fun, do your best," Rowe said. "If you do your best, things will fall where they should fall. You can kind of look at where the seeds are. We've had years where everything has gone wrong. A few years ago a person trips on the hurdles, and someone else sprains an ankle the week of. Keep healthy, do your best, work as a team and support each other."

PHOTOS: (Top) Bessemer's Uriah Aili wins the 800 on Saturday, one of three individual victories for the Speedboys standout. (Middle) Lake Linden-Hubbell's Kellen Klein carries the baton for one of his team's two relay winners. (Photos by Cara Kamps.)