Noah Jacobs of Corunna said the goal of breaking the nine-minute mark in the 3,200-meter run has been with him since the cross country season ended.

Both St. Mary’s and Jacobs made history Saturday at the Lower Peninsula Division 2 Track & Field Finals held at Zeeland Stadium.

Alex Klemm of Macomb Lutheran North set the meet record in the high jump with a jump of 7 feet. Klemm’s previous best was 6-11. Klemm will attend University of Michigan on a track scholarship, and he said he hopes to compete in the long jump and pole vault in addition to the high jump.

Both Hamler and Jacobs are juniors.

There were other strong individual performances, including the showing by Mason’s athletes in the field events and another of the state’s top distance runners, Morgan Beadlescomb of Algonac, taking the 1,600 run with a personal-best time.

But it was the Eaglets’ hurdlers and sprinters, led by Hamler, and Corunna’s Jacobs who rose to the top.

“Oh yeah, we had pressure. We worked hard to get here.”

Jacobs finished second to Beadlescomb at the LP Division 2 Cross County Final last fall by four seconds. Beadlescomb scratched from the 3,200 on Saturday, saying his right knee wasn’t 100 percent healthy. Jacobs won the event last season with a time of 9:27.49, but lost the competitor who might’ve helped him set a fast pace.

“The clock will tell you what I wanted to do,” Jacobs said. “I wanted to break nine (minutes). It makes it hard (when a runner is so far out in front). For me to reach my goal, that’s what I’ve got to do. They didn’t want to go out that fast.

“It’s so surreal. I’m so blessed. I’m so fortunate to stay healthy. The weather cooled down a bit. It was a perfect day. This is my favorite event. If I had to choose from running in the 3,200 relay with my teammates or this I’d take the relay and run with my teammates in a heartbeat. But, individually, this is it. It’s the kind of event I can thrive in.” 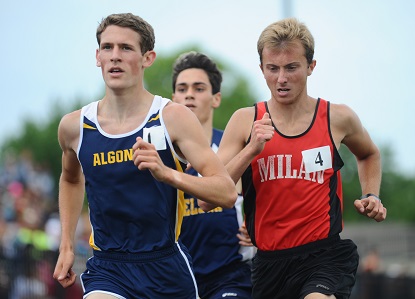 It was a bittersweet ending for Beadlescomb. He wanted to run both the 1,600 and the 3,200, but it wouldn’t have been the right decision.

“I won, but I wasn’t too happy,” he said. “I was tired. I don’t know how to explain it. It just happens. When I wanted to make a move it wasn’t there. I had to go back to third. The second time I tried it was there.”

Justin Scavarda of Mason won the discus with a throw of 182 feet, 6 inches and the shot put with a put of 57-10½. Mason’s Jarrett VanHavel won the pole vault (15-3), providing the punch for the Bulldogs’ strong team total.