We’re all students at YouTube University now, with information — some useful — accessible from experts around the globe. Trending this week are videos ranging from Gordon Ramsay’s breakfast tacos tutorial to step-by-step guides for picking locks with hairpins.

An immeasurable amount of determination, and countless hours of watching film of Malachowski, led Overholt to break a 42-year-old school record earlier this year — a mark he since has bettered twice. At the White Pigeon Invitational in April, Overholt registered a distance of 155 feet, 7 inches to surpass Trent Grossman on the Bulldogs’ record board. A week later, Overholt made a toss of 160-6 in a meet that wasn’t officially finished due to inclement weather. In the following meet, he recorded a throw of 158-1.

“Let me tell you, I don’t smile much, but I had a big smile on my face,” said the soft-spoken Overholt, who earned Division 4 all-state status with a seventh-place finish after posting a mark of 138-3 at last year’s MHSAA Finals. “I was jumping up and down.”

Centreville jumped up to Division 3 this year, but Overholt’s marks still make him one of the favorites a few weeks from now at this year’s Finals at Jenison High School. Yet, you probably wouldn’t assume that with just a passing glance.

As a lanky freshman, Overholt was encouraged to try something other than discus. Still lanky now at 6-foot-6, 192 pounds, Overholt doesn’t look like a prototypical thrower.

But his fascination with the event only grew. As a sophomore, he approached new head coach Mike Hunter about giving it a try. Hunter, like most coaches at smaller schools, does the most he can to instruct his athletes in a wide variety of events. But he’s honest about a lack of expertise in the discus.

“He worked hard at the discus basically by himself,” Hunter said of Overholt. “He did some research and found some people. The hard thing with track is it is hard to coach every event if you don’t understand it, so to speak. I never did field events. I’ve tried to do the best I could to help him, but he’s done a lot on his own. 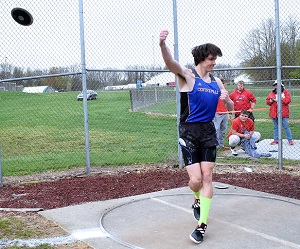 “He has just worked hard and has great technique. It’s not just arming the thing out there. He’s been great to coach, and he’ll do what you ask him to do. He’s right (in the state championship mix) if he can relax and throw with confidence.”

Overholt, who also took on the shot put and hurdles for the first time this spring, knew mastering the technique could trump strength. So he studied Malachowski and other high-level throwers, had his mother, Debra, record his meets, and he broke down that film as well.

“For the first year, I just searched a lot of Olympic discus throwers and tried to copy them,” he said. “Then I started applying details into the spin. There was a lot of improvement, especially my junior year.”

Gaining 20 pounds over the last year has factored in as well after Overholt begrudgingly followed Hunter’s advice to spend more time in the weight room.

“I wasn’t really into it at first,” Overholt said. “It took me until my senior year to really start lifting. Now I’m a lot stronger.”

And more confident and experienced. He admitted that his performance at the

Finals last year was far from his best as he wrestled with the nerves that often come into play for first-timers. Overholt entered this season with the school record in his crosshairs, and now that he’s crossed that off his list, he’s chasing 170 feet. As a result of his success in the circle, his future plans have been altered in the last week.

Instead of going into the Navy after graduation, Overholt is headed to Olivet College, where he’ll throw for the Comets. He still intends to enlist in the Navy when he’s done.

“Some people are amazed by what I do and want to know the secret,” he said. “I’ve surprised myself.”

PHOTOS: (Top) Centreville’s Tyler Overholt watches one of his discus tosses soar. (Middle) Overholt unloads a toss during a meet this spring. (Photos courtesy of JoeInsider.com.)