KENTWOOD – Khance Meyers is widely regarded as the fastest sprinter in the state.

The East Kentwood senior track star will attempt to live up to that billing next weekend when he competes in the MHSAA Lower Peninsula Division 1 Finals.

“I feel amazing going into the state meet as a 100 and 200 runner and defending my title,” Meyers said. “I’m just really excited, and I’m planning on trying to take the state meet record in the 100 and going back for the 200 record and dropping that even more.”

Meyers made a sparkling debut last season at the Finals as a junior, becoming a dual champion while also setting a new meet record in the 200.

Although he had never competed in the Finals until last season, Meyers had lofty expectations for himself.

He had spent the previous two seasons watching and waiting for his time to shine.

For Meyers, his final Finals meet is expected to be special for a couple reasons.

Not that he needed extra motivation, but he will be running on his home turf as the Division 1 Finals will be held at East Kentwood High School.

“Being able to run my last year with my team and to run at East Kentwood is making me feel so amazing inside,” he said. “To have that feeling that I have that advantage to run in my home territory.”

He isn’t taking anything for granted.

“You get everybody at their best level and everybody is battling for a title,” Meyers said. “There is just going to be a lot of pressure on not only me, but everyone else to get a state championship.

“I’m always looking at other people because someone who isn’t ranked can come out of nowhere. You have to be prepared for that, and being number one in the state you can’t slack off or take your time. You have to be fully alert that anybody can just come up and do anything.” 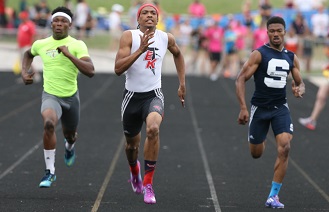 Falcons boys track coach David Emeott said Meyers remains humble despite his past accomplishments. He doesn’t rest on his laurels, and instead displays a work ethic that is unmatched.

“He’s a pretty amazing athlete, there’s no doubt about that, but he’s an incredible worker and no one outworks him,” he said. “He puts the time in on the track more than anybody and he spends time watching film and studying the sport.

“He does what he needs to do to get better, and it’s pretty rare. Usually you get a kid that talented and he doesn’t necessarily want to put in the time. He comes with some natural ability, but he just trusts the process.”

Meyers didn’t know he was gifted on the track until he was in middle school. As an eighth-grader, people began taking notice of his raw speed.

“I came from nowhere in seventh grade to somewhere the next year,” Meyers said. “I became pretty fast, and everyone was telling me that. I was happy and excited to become better for myself and also help people around me get better.”

Meyers also has displayed his prowess at the national level. He took part in the New Balance Outdoor Nationals and placed second in the 200 with a time of 20.78 seconds.

He said competing against the top runners in the country was beneficial.

“Running in the 200 open on the big stage at the national level was amazing,” he said. “That experience gave me a different thought process. I just wanted to run my race, and do what I can do to get better.”

Meyers, who next will attend Hinds Junior College in Mississippi (which finished fourth at junior college nationals this past weekend), has a ritual before the start of every race.

“I pray before I go, and I try to channel everything,” Meyers said. “I just have my mind go blank and just focus on the race. As soon as I get off the blocks, I know it’s just a straight shot from the starting line to the finish.”

Meyers will be the catalyst of an East Kentwood team that will vie for a team Division 1 title. The Falcons placed third last season.

“I feel good about where we’re at,” Emeott said. “All of the guys who made it through have the opportunity to score. If we step up and do our jobs and focus on what is important, then we have a real opportunity to maybe win another state title. I have no reason to think that we’re not definitely in the conversation.”