Aiden McLaughlin’s high school run got cut short, so now it’s time for him to fly.

McLaughlin, who recently graduated from Morley Stanwood High School, was one of thousands of Michigan high school seniors who lost out on their final spring season due to the Covid-19 pandemic. That meant he never got to attempt to repeat his 2019 Division 3 Finals championship in the 800-meter run.

“That was definitely a major goal to try and defend that title,” said McLaughlin, who won that race at Zeeland Stadium with a time of 1:55.1. “But I was really looking forward to being with my teammates for my senior year – seeing how well we could do in our relays and things like that. That was more disappointing for me than the personal stuff.”

McLaughlin never slowed down throughout the lockdown this spring, instead using the time to get physically and mentally prepared for his next challenge. This week, he started his freshman year as a fourth class cadet at the U.S. Air Force Academy in Colorado.

He was on his way to a District basketball game in March when he learned that he had been accepted into the Air Force Academy, a nomination which has been a huge source of pride for the close-knit Morley community.

“We are all so happy for Aiden and can’t wait to see everything he does from here,” said Michele Young, who recently retired after 32 years of coaching track at Morley Stanwood. “He sets high expectations for himself, and he usually reaches them. He has the heart and mind and soul of a champion.” 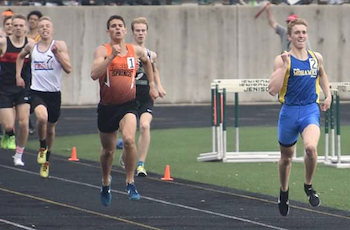 Young has coached some great athletes over her 32 years, including Travis McCuaig, who won back-to-back Division 3 Finals championships in the high jump in 2012 and 2013. However, Young said she has never coached a high school athlete as self-motivated and self-disciplined as McLaughlin.

Not that she is entirely surprised.

Young coached both of his parents, Amanda (Bush) McLaughlin and Curtis McLaughlin, who were standout runners and high school sweethearts at Morley in the mid-1990s.

“They were both amazing athletes as well,” Young recalled. “Mandy was a distance runner and Curtis was more of a sprinter; he was very fast. I tell Aiden he is a combination of them. That’s why he can run anything from the 200 to the 2-mile.”

Getting accepted into the Air Force Academy was a goal for McLaughlin since he attended a running camp there during the summer following his freshman year.

“I loved everything about it, and I made up my mind that I was going to do everything I could to get in there,” McLaughlin said.

McLaughlin put together quite an impressive resume over his four years of high school, notably earning all-state honors in all three of his sports: cross country, basketball and track. He was also a member of the school’s robotics team, National Honor Society and the Mecosta County Youth Advisory Committee. He waded through the lengthy process of applying to the Air Force Academy; he was nominated by John Moolenaar, the representative of Michigan’s 4th Congressional District in the U.S. House of Representatives.

While most people go to the Air Force to fly, the 18-year-old McLaughlin is going there to run – at least at first. He will compete on the indoor and outdoor track teams, while pursuing a degree in aerospace engineering or astronomical engineering.

McLaughlin said he is nervous and excited, “but definitely more excited than nervous.”

“I like anything that’s a challenge to me,” McLaughlin explained. “Honestly, my biggest goal right now is just to graduate from the Air Force Academy. I know if I do that, I will have a lot of opportunities.”