GRAND RAPIDS – Winning it all doesn’t necessarily mean winning them all when it comes to track & field.

The Cardinals still managed to rack up 36 points for the team title to hold off Manton (31), Harbor Springs (28) and two other schools that finished within 10 of the lead.

Seniors Ian Driscoll and Azaiyah Bell, sophomore Ridge Schutte and junior Bradley Lomason had one of the best finishes of the day for the Cardinals, clocking in at 3 minutes, 27.98 seconds in the 1,600-meter relay for second place. Junior Michael Eagan was also runner-up after he sailed 20 feet, 10½ inches in the long jump.

The top eight finishers in each event secure all-state status from the coaches association, and Whittemore-Prescott boasted five more all-state performances. Bell took fifth in the 100 (11.50), Driscoll, Schutte, Lomason and Bell were third in the 800 relay (1:32.92) and Lomason crossed the line in sixth in the 400 (51.52).

No records were broken at Houseman Field on a day with perfect weather. There were, however, a handful of double champions.

Harbor Springs sophomore Jeremy Kloss swept the 1,600 and the 3,200 with times of 4:25.73 and 9:46.25, respectively. He was fueled by a runner-up finish this past fall at the Cross Country Finals, but his game plan for both races seemed to have been scrapped immediately. Kloss reacted well to the chaos that often can accompany the pressure-packed championship meet.

“In the mile, I went out a little harder than I would normally because I didn’t want to get pulled in and surrounded by a pack,” Kloss said. “So I led the race the whole time. 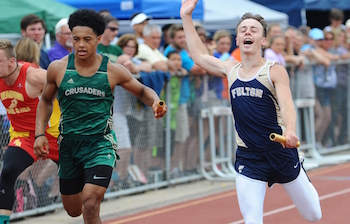 “In the two mile I went out a little slow (4:57) and I was maybe in 10th place at the mile mark. I made up a lot of ground and caught the Saginaw Nouvel kid around the 300-meter mark. It was a completely different race, but it totally worked out in the end. I wanted to redeem myself during track, and it feels really nice. I was really happy.”

Livingston Christian senior Paxton Titus felt his heart rate increase when he had to make his third attempt in the discus count following two scratches. His final toss in the preliminaries went 169-10 to ensure a spot in the finals. He wouldn’t need the extra throws, though, as that mark was good enough to win a title.

He ran his hand through his mohawk, pumped his fists and let out some deep sighs of relief as he left the circle.

Titus was also the favorite in the shot put, and he delivered with a winning distance of 55-9½. Titus was the Finals champion in the discus last season as well and seventh in the shot put last June.

Sand Creek sophomore Alec Muck also doubled Saturday, securing victories in the 100 and 200. He cruised to a time of 10.98 seconds in the 100 and turned in a 22.14 in the 200. The times were personal records, and Muck edged Reading’s Ethan LoPresto, who also has two more years of competition ahead, setting up what should be some exciting matchups to come.

"It felt great to win this year," Muck said. "It was a goal I had this past year, and it's what I strived to do. It felt surreal to accomplish it. The weather was really nice today, and that helped me a lot, I think.

“Coming off last year winning the 200, I was nervous and felt like I had a lot to live up to. It was nice to be able to represent my county and bring home the wins in both races."

Marcellus junior Derek Flory also put his stamp on Saturday’s Finals with a pair of victories. He sprinted to the line in a time of 39.89 in the 300 hurdles and logged a distance of 20-11 to win the long jump.