An increasing number of high-profile athletes and coaches are becoming more vocal about the importance of a well-rounded adolescent athletic experience. More and more parents and athletes, so it seems, are heeding that advice.

That’s the case in Bronson, a town of fewer than 2,500 residents that manages to keep rolling out successful varsity sports programs. Or perhaps it’s that athletes in Bronson never bought into sports specialization as much as other communities in the first place.

But, through decades of coaching, she’s seen the effects of athletes choosing a narrow focus.

“I think for most schools and most sports, we’re seeing our numbers dwindle,” she said. “I believe that a lot of parents take their kids to travel ball, and it’s taking them out of high school sports. I think club sports are kind of hindering our high school athletics.”

The National Collegiate Athletic Association reports that six percent of high school athletes go on to play in NCAA programs, and as of 2012 fewer than two percent of high school athletes earned an NCAA Division I scholarship (of any amount), according to a CBS MoneyWatch report. Fewer than eight percent ever play a varsity sport at any collegiate level, according to a study by ScholarshipStats.com.

It’s an admirable dream, but an unlikely one. And along with that gamble comes the great possibility of burnout. Some studies have also suggested that young athletes competing in only one sport year-round are at a higher risk of injury. On top of that, specialization doesn’t seem to improve those odds.

“If you want a (college) coach to know about you, just do some work and they’ll know about you,” LaClair said. “That’s how I look at it. If you’re good enough, a coach is going to see you. You don’t have to go to a club tournament to be seen.”

Though participation in multiple sports is commonplace amongst both genders at Bronson, girls sports in particular have reaped the rewards of such commitment. 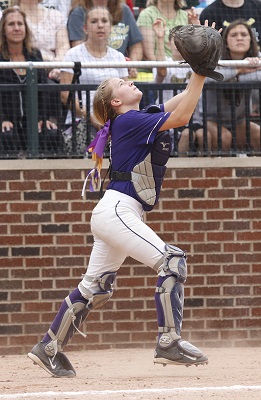 Look no further than the Vikings’ Division 3 runner-up performance in softball last spring (they lost to Monroe St. Mary Catholic Central in the Final), which seemed to fire up the volleyball squad this past fall.

It was the Vikings second MHSAA title since 2009.

Of the 13 volleyball players who hoisted a trophy at Kellogg Arena in November, six are two-sport athletes and seven are three-sport athletes.

And of the 11 varsity basketball players currently on the Vikings’ girls roster, eight played volleyball and a total of 10 participated in a fall sport.

As Kelsey Robinson’s prep career winds down, she believes playing several sports has made her better at each one. Not to mention she and her classmates find joy in the memories created through a variety of competitive situations.

“It’s just really fun to do different things,” said Robinson, a defensive specialist in volleyball, a former cross country runner, a guard in basketball and a third baseman and centerfielder in softball. “We don’t have a lot of the numbers, but we have the people who are willing to put in the hard work, even if it’s not their best sport. Each season is only three to four months at the most. So it keeps things exciting.”

Some do take part in the club scene on a smaller, more local level. Most take advantage of the coaches at Bronson who are generous with their time.

“I’ll get into the gym with any kid any time they want to,” LaClair said.