Gary Ellis has received various awards over a career that’s stretched nearly a half century and included various contributions to high school athletics in our state and tennis in particular.

But one of his most recent honors says perhaps the most about Ellis’ philosophy.

In 2016, the longtime Allegan tennis coach and former high school athletic director was named to the United States Tennis Association’s national “No-Cut Coach All-Star Team” recognizing middle and high school coaches who welcome all students to participate in the sport.

Ellis’ boys tennis teams regularly have as many as 25 players, and his girls teams when he led that program as well often approached 30. His largest team had 35 athletes.

“I think sports obviously are very good for kids and their development,” Ellis said this week. “I enjoyed (playing), and I’m trying to give other people the opportunity to enjoy athletics and tennis in particular, like I did.

“In volleyball (which he coached for four seasons in the 1970s), we had to make cuts and I absolutely hated it. So it’s nice; we keep everybody who comes out. If a senior comes out who has never played tennis before, he’s welcome to join us.”

That dedication to providing opportunities is part of what also has made Ellis the 2018 recipient of the Michigan High School Athletic Association’s Charles E. Forsythe Award.

The annual award is in its 41st year and named after former MHSAA Executive Director Charles E. Forsythe, the Association's first full-time and longest-serving chief executive. Forsythe Award recipients are selected each year by the MHSAA Representative Council, based on an individual's outstanding contributions to the interscholastic athletics community.

Ellis served as Allegan High School’s athletic director from 1983-89 and again from 2004-13, and also taught mathematics, history and government over a career in the building that stretched 39 years. Ellis has coached the boys tennis team since 1975, and coached the girls tennis team from 1981-84 and then 1990-2003, leading the boys and girls teams to a combined 32 top-10 finishes at the MHSAA Finals.

But those are only some of the local highlights. Regionally, Ellis has served as league secretary for the Wolverine Conference and hosted various MHSAA events at the District, Regional and Quarterfinal levels. Extending his impact across the state, Ellis is a long-serving member of the MHSAA Tennis Seeding Committee and has served on Tennis, Baseball/Softball Site Selection and Scholar-Athlete committees, among others. He continues to serve as secretary/treasurer and was president of the Michigan High School Tennis Coaches Association (MHSTeCA) from 1995-96. 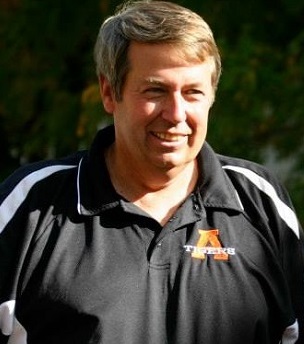 Ellis also served as an MHSAA registered official for 39 years in volleyball through the 2011 season and basketball for 26 years through the 1998-99 boys season.

“As a leader in athletics and especially the tennis community, Gary Ellis has influenced and inspired administrators, coaches and students for more than 40 years,” MHSAA Executive Director John E. “Jack” Roberts said. “In addition to serving as a fine athletic director representing his school, he’s long provided key insights on the best ways to conduct tennis programs in this state, from how to seed the top players at our tournament to how to include as many as possible on the local team. We admire his dedication and are glad to honor him with the Charles E. Forsythe Award.”

As mentioned, this is hardly the first time Ellis has been honored for his many contributions.

Ellis previously was named Community Person of the Year in education from the Allegan Area Chamber of Commerce and received the Allegan County Outstanding People for Education Award.

“I consider Gary to be a mentor, friend and role model,” Vicksburg athletic director Michael Roy wrote in recommending Ellis for the Forsythe Award. “I know that the Forsythe Award is presented to individuals who have served interscholastic athletics. I know that of the people I know in the business, Gary Ellis is a pure example of one who serves.”

In addition to his work in schools, Ellis has served the Western Michigan Tennis Association in various roles. He’s been chairperson of the USTA/Midwest Section Junior Team Committee and worked as an official at local USTA events including national tournaments hosted by Kalamazoo College’s Stowe Stadium. He received the USTA’s Midwest Stan Malless Award recognizing his promotion of tennis in the community.

He will receive the Forsythe Award during the break after the first quarter of the MHSAA Class A Boys Basketball Final on March 24 at the Breslin Student Events Center in East Lansing.

“It’s a huge honor. To get something like that for doing the things you love doing, it’s really nice,” Ellis said. “At the end of every season I have a little bit of withdrawal. You’re so involved and so active with (coaching), and the associations with kids and parents and opposing coaches is a really neat thing.”

Ellis graduated from Battle Creek Central High School in 1970 and then attended Kellogg Community College and earned his bachelor’s and master’s degrees at Western Michigan University in 1974 and 1980, respectively. He maintains membership in the MIAAA and MHSTeCA and also the Michigan High School Coaches Association. Ellis is a member of the Allegan Lions Club and has served as president, and also is active as part of Christ Community Church and the Allegan Booster Club.


Past recipients of the Charles E. Forsythe Award