Scott Przystas had plans earlier this week to “crash” a Grand Haven schools party with vegetables grown in his classroom’s hydroponic garden. It may be winter outside, but in his physical education class, it’s time to harvest.

But the Michigan chill doesn’t mean his students – ranging from Young 5’s to fourth grade – will be restricted to the gym for the next three months. When they return in 2017, they’ll head outside and give snow-shoeing a try.

Teaching includes a lot more than daily dodgeball or rolling out the basketballs for Przystas, a member of the MHSAA Multi-Sport Task Force and this fall’s honoree as Michigan Physical Education Teacher of the Year by the state’s chapter of Society of Health and Physical Educators (SHAPE).

The task force over its first few months has determined that the message on the many benefits of participating in multiple sports must be delivered to students and their families long before these students reach high school and even junior high – making passionate educators like Przystas especially key. He passes on a perspective that “PE is the most important thing we can teach kids, how to be physically active for life” while teaching students at Grand Haven’s Mary A. White and Rosy Mound elementary schools.

“That’s our goal with the elementary PE department in Grand Haven, to make it relevant again,” Przystas said. “Because it’s really easy in our profession (to say) here’s the ball kids, do you want to do. But it’s not gratifying at all. It’s not satisfying to the kid or the teacher.”

Przystas brings the MHSAA task force a wealth of experience as a coach – he’s in charge of the high school’s girls cross country team, serves as freshman coach and varsity assistant for girls basketball and leads the middle school track & field teams. But he also provides an important voice for physical education, an area the task force considers crucial to growing interest in playing many sports instead of specializing in one – which studies have shown can lead to chronic injuries when playing that one sport while leading those children to become adults who are less likely to be physically active and fit. He is in his eighth year in the Grand Haven district and has taught in nine buildings at the elementary, middle, high school and alternative education levels.

“Scott has been instrumental in leading changes to the PE program in Grand Haven,” Mary A. White principal Valerie Livingston said in a report for the Grand Haven Tribune. “His excitement about life-long fitness and nutrition is contagious in the school. Under Scott's direction we have students who look forward to smoothie bars at lunch and are excited to see our new tower garden grow.”

Przystas’ philosophy is deeply-rooted in the positive experience he had growing up in Gladwin, a much smaller community than Grand Haven located north of Midland and Mount Pleasant.

His father Ronald – who formerly worked at the Lansing State Journal and Cadillac Evening News before becoming a reporter, editor at later publisher at the Gladwin County Record – died in a car crash in 1996. But he left his then 10-year-old son a love for sports photography – Scott minored in journalism at Michigan State University – and also plenty of familiarity with athletics. A track & field meet hosted by Gladwin Junior High School bears Ron’s name.

Sports provided an outlet during that tough time. During middle school, Scott would go from a basketball game to hockey practice that same night, filling his time with those sports, golfing and a variety of other like activities.

A few years after his dad’s death, Przystas became a manager for the Flying G’s boys basketball varsity coached by Kirk Taylor, who had gotten to know Ron well over the years. Ron had made sure Kirk understood the importance of Gladwin beating county rival Beaverton – they play for a trophy dating back to 1937 – and so it was memorable when Scott, as a senior during the 2005-06 season, scored a career-high 25 points to help the Flying G’s beat the Beavers despite the fact he really wasn’t a scorer as much as a solid all-around player.

“Scott was part of the best group of captains I have had here at Gladwin in the past 23 years,” Taylor said. “One of his co-captains was quiet and out-worked everybody. Another of his tri-captains was very direct with players. Scott was a little of both, but he always delivered the message with the most positive manner.

“I did not know that Scott would become a teacher and/or a coach, but I did know that he would be very successful at whatever profession he chose.”

Przystas made the all-Jack Pine Conference second team as a senior in 2004 while also earning all-league honors in golf and serving as a pinch-runner in baseball for a couple of seasons – but that was just a start on his athletic endeavors. At MSU, as he was studying toward a degree in kinesiology, Przystas played on the practice scout team that daily took on the women’s basketball team as the Spartans prepped for multiple NCAA Tournament runs. He knew he wanted a career in sports, and that experience got him interested in coaching. He also participated on the MSU triathlon club team, which got him into endurance sports. 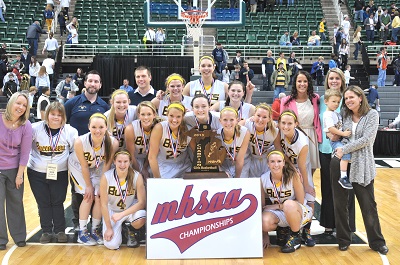 He graduated from MSU and before the fall of 2009 latched on at Grand Haven. His first call was to Buccaneers girls hoops coach Katie Kowalczyk-Fulmer, and he was on her bench as an assistant for the program’s back-to-back Class A championships in 2012 and 2013 – while also for a time living in her basement before marrying his wife Renee.

Przystas also inherited the high school’s girls cross country program, which he coaches with Renee, and which has made the MHSAA Finals 17 straight seasons. In addition, he became the Lakeshore Middle School track & field coach – and he sees all of these as being related.

“At a Class A school like this, I’d like to say having most (students) participating in high school sports is because of the elementary PE teachers rocking it,” Przystas said. “Our numbers in cross country are up there (50-60 athletes the last few seasons), our numbers in track are getting up there, and the kids are seeing a familiar face and enjoying the process and sticking with it.”

Passing those lessons on

Przystas – who has served a two-year term on the Governor’s Council on Physical Fitness, Health and Sports – teaches from a philosophy based on a pyramid. The bottom level is health and knowing how to take care of oneself, with the middle level physical literacy and the body’s ability to solve movement problems to avoid injury. The top of his pyramid is adventure, and that’s what he’s trying to deliver to his students.

But to do so, he also has to be able to relate and communicate with them.

“Scott makes it fun. He’s just very organized – and he connects with whatever age group, whether it’s kindergarten kids or high school girls,” said Kowalczyk-Fulmer, recalling how excited her 5-year-old son was to have “Coach P” as a teacher. “Freshman girls can sometimes be an interesting group to coach … but he never changes who he is. I’ll stand in the locker room after games and listen to the things he says. Just the quality of person he is, he’s a role model, he and his assistant Kelly Kieft. He’s just a good, positive role model for young people.”

Przystas noted how SHAPE America is pushing for the generation of children being born now becoming an “active” next generation, and as a newer father this hits home – and also helps fuel his desire to help.

He said it’s harder to plant that seed when students are older – but that’s where his responsibility as a cultivator at the elementary level comes in.

“I had a great childhood experience,” Przystas said. “That was the big thing. I fully remember all of the pickup games we had in our neighborhood, the outdoor adventures exploring, playing ping-pong on a chipped-up table.

“(That’s why) I promote to kids in middle school, elementary school, to go check out a lacrosse game. Go to swim camp. Be active this summer. Don’t just be sitting around. We’ve just got to get them outside more and have kids be active.”

PHOTO: (Top) Teacher Scott Przystas (kneeling) works with one of his elementary school classes in Grand Haven. (Middle) Przystas (back row, second from left) has been an assistant on two Class A girls basketball championship teams. (Top photo courtesy of the Grand Haven Tribune.)