Just when it seemed that the waters had calmed concerning conference realignment in Southwest Michigan, two area leagues are expected to lose a chunk of their respective memberships with the berth of a new alliance.

It was announced in June that Bronson would be leaving the Berrien-Cass-St. Joseph League at the end of the 2016-17 school year to join the Big 8 Conference. The BCS began in 2014.

Seven of the 10 school districts have already voted in favor of the new league, with the last three unnamed schools expected to vote the same way later this month.

Once again, football was a driving force, though several other factors sparked the initial discussions back in August. It was important for Centreville, Mendon and White Pigeon to stick together after a long run dating back to the St. Joseph Valley League.

Competitive fairness and logistics were two other key concerns.

“(The SAC schools) came into this meeting stating the No. 1 goal is to not have a mega conference,” Mendon co-athletic director Glen Samson said. “They tried to get us to strike while the iron is hot. At the same time they are discussing this with us, the superintendents of the SAC and the BCS wanted us to all get together and form an even larger league, like 35 schools.

“We’ve just not had a whole lot of luck with this large conglomerate. It’s not really a league. You can see people voting on party lines, so to speak.”

A big obstacle in the BCS was football scheduling. The BCS did not make it mandatory that teams play cross-divisional games, which left some schools in the lurch when it came to filling out a nine-game schedule.

For instance, Mendon had to drive to the Upper Peninsula in Week 9 to play Manistique after finding no takers from similar-sized schools and with no desire of its own to compete against the likes of Class B programs up to three times a year.

Current BCS schools like Berrien Springs, Buchanan, Comstock and Parchment — all with about 450 students or more — are twice the size of schools like Mendon (203) and Cassopolis (278). 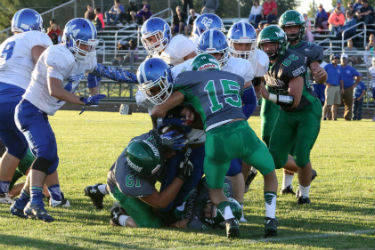 “This idea came across our table, so we took a look at it,” Samson said. “The schools involved want to keep it to 10 teams. The more we got into it, the more it made sense.

“When Bronson left, it left us with four teams in our division in football. All that guaranteed Mendon, Centreville and Cass were three games. We’re sitting here with three games, and we have to find six and we have to now play two or three Class B schools to fill out a schedule in a league of 18 teams. This is not right.”

A 10-team league solves that issue and makes for easier organization of all other sports. More often than not, Samson and Cassopolis athletic director Matt Brawley agreed, coaches didn’t even know what division their school was in as the groupings changed by sport.

“Scheduling and getting the bylaws in order,” are at the top of the priority list for Brawley. “Right now, things seem to be running pretty smoothly. We have a great group of athletic directors and superintendents working diligently.”

If all goes according to plan, schedules will take care of themselves in the Southwest 10 since most schools offer the same sports. There are five schools that offer soccer with a sixth considering adding it for next season. A positive byproduct would be less travel time.

“For Cass, logistically, our furthest drive (would be) 37 miles,” Brawley said. “Marcellus and Decatur are our next-door neighbors. It doesn’t make much sense not to play them (as is the case now).

“I’m very excited,” Brawley said of a new league without divisions. “What I’m most excited about is being in a league where you’ve got to (likely) win nine games to win the conference championship or go 17-1 or 16-2 in basketball. It holds a lot more weight. The BCS is a great bunch of people, but this opportunity makes the most sense for us.”

PHOTOS: (Top) Centreville and Marcellus face off in a girls basketball nonleague matchup. (Middle) Mendon and Casspolis will bring their football rivalry to the new Southwest 10 Conference. (Photos courtesy of Wes Morgan.)