Nikki Norris received her life’s education from professional educators. Her father Howes Smith served as an assistant principal and then principal at Ithaca High School, and her mother Maple was a teacher. Howes’ mom also taught.

Their influence and example certainly rubbed off on Nikki and her siblings. Norris has worked in education for more than 30 years, while her sister is a school guidance counselor and their brother a college professor.

In fact, Norris has impacted educational athletics in nearly every role possible as a teacher and athletic director at multiple schools, coach at various levels and game official. She is in her second year as athletic director at East Lansing High School after eight in that position for Corunna Public Schools. She previously taught for six years at Carson City-Crystal and then 11 at Corunna before taking over the Cavaliers’ athletic department during the summer of 2010.

She also coached volleyball at multiple levels over more than 15 years including Corunna’s varsity from 1999-2002 and 2006-09, and coached high school basketball for a combined eight years during her time at the two schools where she taught. Before and between her volleyball coaching stints, Norris also has served as an MHSAA registered volleyball official for a total of 12 years.

Norris’ many and continuing contributions will be celebrated Sunday, Feb. 2, when she receives the Michigan High School Athletic Association’s 33rd Women In Sports Leadership Award during the WISL Banquet at the Crowne Plaza Lansing West.

“I try to connect with all students, athletes or not, because there are so many kids who just need a connection," Norris said. "And if we can find it through sports, or through clubs, or teaching – I do look at them all as my own children, to a certain extent. We used to say in Corunna, 'They're all our kids.' And I want them to be successful in whatever it is they want. And if I can help them, that's what I'm there for.

“So many people did it for me. Coming from a family of educators, and my dad an administrator, I knew what that entailed as far as how they get into your heart. I want to do that for kids.”

Each year, the MHSAA Representative Council considers the achievements of women coaches, officials and athletic administrators affiliated with the MHSAA who show exemplary leadership capabilities and positive contributions to athletics.

Those who wrote letters recommending Norris for this year’s WISL Award especially noted that personal impact she has on students, staff and colleagues.

Fowlerville athletic director Brian Osborn – one of her former coaches – wrote of how Norris goes above and beyond to care for and connect with her student-athletes. Owosso athletic director Dallas Lintner wrote of Norris’ dedication to children’s safety and educational values. Fenton athletic director Mike Bakker noted how fortunate her students are that Norris made the decision to leave coaching for administration, where she can have an even larger impact.

But she does continue to lead on wide-ranging levels, both at her much larger school and beyond. 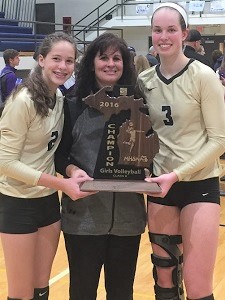 While at Corunna, Norris served as master scheduler and part of the constitution committee for the Genesee Area Conference. Her schools have hosted various MHSAA Tournament events in multiple sports, in addition to local invitationals and conference meets. She’s served on every type of MHSAA Committee, providing input on a variety of sports, site selection, officials selection and the Scholar-Athlete Award. She also annually volunteers as a tournament administrator at the MHSAA’s Volleyball Finals in November and Baseball/Softball/Girls Soccer Finals in June.

As a member of the Michigan Interscholastic Athletic Administrators Association (MIAAA), she has facilitated sessions and presented at its conferences and served on the newsletter committee.

“Nikki is one of the most genuine, caring and hard-working people I’ve ever met in athletics,” MHSAA Executive Director Mark Uyl said. “She has worked extremely hard in both Corunna and East Lansing to develop a first-class program that produced high-character people. Nikki is truly a role model to everyone in the world of athletic administration.”

A 1987 graduate of Ithaca High School, Norris received her bachelor’s degree in biology with a minor in exercise health science from Alma College – where she also competed as a runner and thrower in track & field – and then earned master’s degrees in biological sciences from Michigan State University and educational leadership from American College of Education.

Norris lives in Bancroft and is the mother to two daughters, Meredith and Elizabeth Norris. Neither is planning to go into education – but sports is a big part of both their current lives and likely futures, and no doubt the impact of growing up in a sports family has played a significant part. (Their dad, Dr. Robert Norris, played basketball at Alma College and serves as physician for the MSU hockey, volleyball and baseball programs and Lansing Lugnuts.)

Meredith was named the state’s Miss Volleyball Award winner in 2017 as a senior at Corunna and plays currently at Michigan State. Elizabeth is a senior at Corunna and was a finalist for the same award this past fall, and will continue her academic and volleyball careers at University of North Dakota. Meredith is majoring in kinesiology, and Elizabeth is planning on orthopedic surgery.

“I look at the names that are on the (WISL Award) list, and there are so many deserving women who over my career I've looked up to and aspired to be like when I 'grow up,'" Norris said. "So to even be considered in that group is amazing, humbling. It's an honor."

Past recipients of the Women In Sports Leadership Award