EAST LANSING – Rochester Adams eked out its first Finals championship last year, but this time the Highlanders gave their nerves a little bit of a rest.

“We expected to win this year – that was our mindset,” said Claire Crutchfield, one of seven seniors on the Highlanders’ roster.

“Maybe we didn’t think we’d win by that much, but we have been working non-stop since state last year and all of that hard work has paid off.”

Adams now has finished either first or second in Division 1 four years in a row, with runner-up finishes in 2018 and 2019. 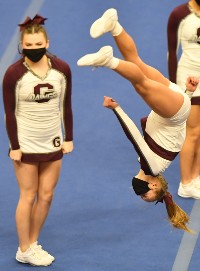 The Highlanders lost only four seniors off last year’s team and had a strong group of senior leaders this winter. Crutchfield and Olivia Ris are both returning first-team all-staters, Ava Bondra was second team in 2020, Melina Catenucci and Carly Schultz were honorable mention and the other seniors are Maya Dalal and Kennedy Lloyd.

Brooke Miller, who is in her seventh year as Adams coach, said her team’s business-like approach was critical Friday and throughout the season, as it won all but one competition all year.

“We do a lot of visualization and practice keeping our nerves in check,” explained Miller, who is assisted by Jocelyn Welsh, Quin Gonzalez and Alison Keaser. “Then when we get in a pressure situation, it’s kind of business-like. It’s just doing what we do.”

The win also solidified Rochester as the epicenter of Division 1 cheer in Michigan. The city in northern Oakland County has produced five of the past six D1 champions – with Rochester winning in 2016 and 2017 and Rochester Hills Stoney Creek in 2019.

The hardest part of the day for the Highlanders’ seniors was when it ended.

“I’ve never been on a team with a bond like this, so yeah, it was very bittersweet running off that mat for the last time,” said Schultz.

The biggest surprise of the day was Grandville, which didn’t even make the Finals last year and got off to slow start Friday, sitting in sixth place after the first round.

But the Bulldogs kept fighting and moved up to fourth after a solid second round. Then they nailed their third round to vault all the way to second when the final results were announced.

“What a Round 3; we really hit it,” said Grandville coach Julie Smith-Boyd, who is the dean of state cheer coaches in her 40th year. “We didn’t make it to state last year and we have a very young team, so just getting here was a big accomplishment – taking second is fantastic.”

Smith-Boyd has led Grandville to six Finals titles, the most recent in 2015, and now has 10 runner-up finishes.

This season’s may have been the most unanticipated of any of those top finishes, as the Bulldogs had just three seniors, who were also the team’s captains – Chloe Beatty, Ellie Irwin and Charli Sanchez.

PHOTOS: (Top) Rochester Adams celebrates its repeat championship in Division 1 on Friday. (Middle) Grandville rose from sixth after Round 1 to finish runner-up. (Click for more from Hockey Weekly Action Photos.)