The Jaguars built a big lead, then held on despite not having their best stuff in Round 3 to capture their second consecutive Division 2 championship at the Breslin Center at Michigan State University.

“We didn’t have our best Round 3, but we definitely had our best Rounds 1 and 2,” said Allen Park senior Kylee Dietz, a returning all-stater from last year. “That just proves it takes three rounds to win a state championship.”

Allen Park posted the best scores in the eight-team field in the first two rounds and did enough in the final round to win with a 782.34 score.

DeWitt (778.90) moved up one after a third-place finish last year to place second. Muskegon Mona Shores (776.48) moved up to third with the best Round 3 score in the field.

Allen Park has now won three of the last five Division 2 titles, while placing second the other two years.

Julie Goodwin, in her 16th year as the Jaguars’ coach, said the key to this year’s victory occurred long before Saturday’s first two rounds – and far away from the bright lights of the Breslin Center.

“For two months we had practice on the computer four days a week and we had 100 percent attendance,” said Goodwin, who is assisted by Meghan Terry, Tina Johnson and Jessica Tremonti. “These girls worked hard in their basements.”

It looked for most of Saturday morning that Allen Park was going to run away from the rest of the field, in similar fashion as Rochester Adams did in the Division 1 Final on Friday.

But the Jaguars had an uncharacteristic drop on a stunt and several bobbles in Round 3, opening the door, albeit slightly, for its competitors. Goodwin said her team showed its grit by finishing the round strong.

“Endurance and perseverance were the key to today’s win,” Goodwin said. “I have been saying all year that we are grateful, thankful and blessed –  and I truly mean that.”

Those six seniors pointed to the depth of the program, with 27 girls on the roster, as the key to this year’s championship. That depth allowed the Jaguars to overcome teammates that were sidelined by COVID testing and injuries. 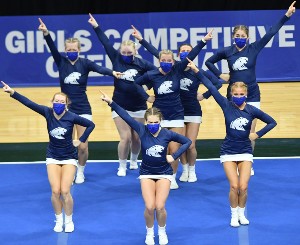 “Everyone here is always prepared to step in and get the job done,” said Guthrie.

Allen Park will likely be in the hunt for a “three-peat” next winter, with a strong group of 10 juniors (including all-staters Adrianna Carone and Cassidy Kuhn) and nine sophomores returning.

DeWitt, which has never won a cheer Finals championship, finished runner-up for the third time, after also taking second in 2007 and 2015.

“We had a feeling we were going to have a breakthrough, and it finally came today,” McKinley said. “It’s sad that it’s over, but it’s great to leave with this big trophy.”