I’m a firm believer that we don’t pick our hobbies; rather, they pick us.

As a college student at Western Michigan University, I made a phone call to the athletic department at Kalamazoo Central High School to ask what they knew about the history of their high school football team. I wanted to cross-reference their scores of past football games versus Muskegon High School against a list I had created. It was late 1984.

“Yes, we have that,” stated the person at the other end, “but you should really speak with Dick Kishpaugh. He’s the guy that compiled that information. Here’s his number.”

I thanked them for the information and made the call from my dorm. Indeed, Kishpaugh had compiled the collections of scores I sought and would happily share it. The call could have ended there. Yet, for some reason, I asked another question.

“One more thing,” I blurted out. “There’s this building in East Lansing that I drive past when I’m visiting friends at Michigan State. It’s the Michigan High School Athletic Association. I’m wondering if they might have anything in their files about the history of sports.”

“Well,” stated Kishpaugh. The pause that I hear in my head when I recall this memory gets longer and more dramatic each time I press the replay button. “If they have it, I probably wrote it.”

Just like that, I had found the state’s historian for high school sports. It was the beginning of a lifelong friendship.

After a few visits to his home in Parchment, just outside Kalamazoo, Dick invited me to join him in the press box at the Pontiac Silverdome for the 1985 MHSAA Football Finals. Of course I accepted. As a kid growing up in Muskegon, I had wanted to attend this event, but had never found the chance.

In March, I joined him for the Boys Basketball Finals in Ann Arbor. I had found a mentor, and he, a protégé. Along the way I learned his father would hand him the sports section from the newspaper, allow him the chance to study the college football scores, retrieve the pages, and then quiz him on the results of the games. For each score he got right, Dick was rewarded with a nickel.

“I got pretty good at recalling numbers,” he said, laughing.

I learned that he had attended his first MHSAA Boys Basketball Finals in 1944 with a friend, Nick Vista, during their high school days at Battle Creek Central. He told me that after seeing the tournament at Jenison Field House, they wondered about the records from past tourney games. When told by then-MHSAA Executive Director Charles Forsythe that nothing existed, the two of them began researching. A year later, the beginnings of what would become a lifelong passion was unveiled. (Vista later would serve as Sports Information Director at Michigan State University).

Admitting he didn’t exactly apply himself to his studies, Dick told the story of how his high school principal, recognizing his interest in sports, had worked a deal with the sports editor at the Battle Creek Enquirer for Kishpaugh to work as a stringer for the paper. The single contingent was that his grades had to improve drastically. Immediately, they did. Kishpaugh now had a press pass. 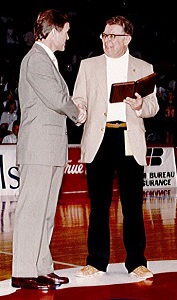 Like me, Kishpaugh had attended WMU, back in the day when the school was much smaller and a major training ground for future teachers. He served as sports editor for the yearbook and campus newspaper. He also met his bride-to-be, Shirley.

Because of this background, he met many students that would go on to coach at high schools across the state. These friendships would pay dividends for years to come as he assembled varsity game results and record performances. For 20 years, he also served as publicist for the Michigan Intercollegiate Athletic Association (MIAA), enhancing his reputation and expanding his circle of friends.

On the high school side, he dug out details from scrapbooks, yearbooks, newspaper clippings and microfilm. It was a hobby, but he always approached it as though it were his livelihood. He wrote – and this is no exaggeration – thousands of cards and letters over the years, asking former coaches and athletes for long-lost details.

His focus was football and basketball. He compiled those details into what we now commonly refer to as the MHSAA Record Book. And, although few readers probably realized it, he would supply interested sportswriters with facts, figures and the little item that would spice up their article with details few would know.

Eventually, his talents were recognized with an honorary title. Dick became known as Michigan's high school sports historian. He was the go-to guy for reporters, old and new, when a performance needed historical perspective.

When Title IX came to fruition and helped to increase opportunity for girls, he applauded the change. Immediately, he started a girls basketball record book. He wrote about the girls game, researching its origins, and shared his findings with readers of the MHSAA game programs.

I arrived in his 40th year of service. For the next decade, I tagged along, meeting an amazing array of sportswriters, broadcasters, coaches, and former players from high schools and colleges across the state and beyond. Thanks to his connections, we watched Big Ten, Mid-American Conference and MIAA college contests from press boxes and sidelines. Together, we were treated like dignitaries at the opening of the new College Football Hall of Fame in South Bend, Ind. I visited Dick and Shirley’s summer cottage, a landmark and slice of heaven located in Hickory Corners. He attended my wedding. We discussed an amazing array of subjects, including travel, history, and family.

In the spring of 1993, after 10 years of friendship and education, he told me it was my turn.

“I’m going to go concentrate on the college game,” he said, smiling. “You take over as high school historian.”

Dick was 67. Just prior to attending the high school basketball tournament, his 50th consecutive, he shared the news with his longtime friend, Joe Falls of The Detroit News. Shortly after the games, he headed off to the British Isles with his bride Shirley to indulge in their favorite pastime: travel.

In 1998, Dick attended his 55th straight MHSAA Basketball Finals. The streak ended a year later, as Dick and Shirley chose to celebrate their 50th wedding anniversary with a trip to Austria, Switzerland, Germany and the British Isles during tournament time.

“I always knew I was going to miss the Finals sooner or later,” Kishpaugh told a Detroit Free Press reporter. “Our 50th wedding anniversary takes precedence.”

The streak was restarted in 2000, but it wouldn’t last. In April, while returning from a planned meeting at the College Football Hall of Fame, where he served on a committee designed to identify athletes and coaches from small colleges for possible induction into the Hall, Kishpaugh was killed in a traffic accident.

He passed away while doing what he loved. Still, the sports world lost an incredible resource and pioneer, dedicated to honoring the incredible accomplishments of Michigan’s high school student athletes. I lost a friend and a huge influence. It is an honor to occupy his shoes.