A picture may be worth a thousand words – but often, we can learn as much from a traveling trophy, game ticket, and even an old megaphone.

Michigan’s high school sports history is more than a century old and filled with legends passed on of games, teams and athletes and the roles they played as our communities rolled forward toward present day. Following up last year’s “Tales of Teams, Trophies & Trinkets,” we present a second chapter highlighting artifacts that tell some of those stories. 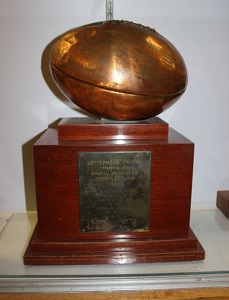 This bronzed football was the original used in the 1909 Thanksgiving Day contest played between Saginaw High and Saginaw Arthur Hill, and won by Saginaw, 5-0 at Burkart Park. In 1948, the ball was stylized into a trophy by the Letterman’s Associations of the rival schools, designed to travel between schools as the reward for winning the annual contest. When the Lumberjacks of Arthur Hill ripped off 24 straight victories beginning in 1971 (the teams played twice in 1974), ownership of the trophy was mostly forgotten.  When talk of closing Saginaw High School mounted, the trophy was placed on display at Saginaw’s Castle Museum, then donated to the Saginaw County Sports Hall of Fame.

According to Jeffrey Cottrell, the multi-media specialist at the Historical Society of Saginaw County, when plans to close Saginaw High did not materialize,  “it was decided amongst the Saginaw County Sports Hall of Fame and the Arthur Hill Letterwinners Association that it was time to put it back into use.  This past fall, the Sports Hall of Fame awarded the trophy to Saginaw High when they beat Arthur Hill 40-0.”

Going forward, the Letterman's Trophy will continue to be presented to the winner of the football game between the Trojans and the Lumberjacks. 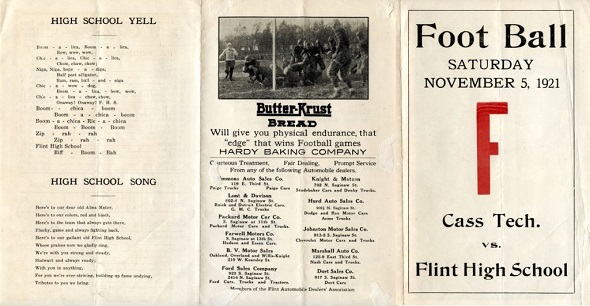 A crowd of 2,500 was on hand for this contest as Detroit Cass Tech downed Flint Central, 34-20, in an aerial battle between the squads. The Detroit Free Press arraigned for a special interurban run, with special railcars earmarked for Cass Tech students interested in attending the Saturday game at Flint. Between 200 to 300 made the trip to cheer their team to victory.

Flint Central completed 14 of 34 passes for 176 yards, but was intercepted on six occasions. Cass Tech arms were accurate on only 7 of 24 attempts for 160 yards, with four interceptions, but two completions went for touchdowns of 18 yards and 50 yards. A third pass of 35 yards helped set up the visitor’s first score. Bruno Murkobred, Cass Tech’s speedy quarterback, was the star of the contest, scoring three of his team’s five touchdowns.

This tattered memento, from a scrapbook kept by historian Dick Kishpaugh, illustrates the modest design of a high school basketball  program back in 1939. Likely created by the high school print shop, this single sheet, printed specifically for distribution at the game, features autographs gathered by its owner. Wes Clark, one of the names captured on the cover, led Battle Creek Central with 10 points, including a pair of buckets in the final minute to secure a 27-26 win by the Bearcats.

Newspaper reports from the time indicate that halftime of the contest would feature “a table tennis exhibition between Helen Van Dyke of Flint, four-time state champion, and Floyd Painter, Battle Creek champion.” Miss Van Dyke was a sophomore at Olivet College at the time. 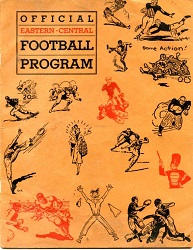 This is the program cover from the 13th annual Football Classic between the Quakers of Eastern and the Big Reds of Central. Fans were requested to “refrain from making unnecessary noise as they drive away from the stadium … due to the nearness of Sparrow Hospital.”

At the time of the 1940 contest, Lansing Central led the series with six wins against five defeats. The series featured a single tie, a 6-6 result in 1935.

Eastern’s 1940 squad, coached by Walter Graff, was able to knot the series at six wins apiece with a thrilling 7- 6 victory over the crosstown rivals, coached by Al Bovard.

The 16-page document was hand set and printed by the Eastern and Central High School Vocational Printing Classes, and included rosters, messages from the two school principals and athletic directors, as well as comments from each member of the coaching staffs, team captains, student council presidents and numerous team members  from each school with their views on the game. Of course there is a photograph of each high school football team, but also photos of each band, their directors, and a list of the band members for both Eastern and Central. Finally, there are photos of the Eastern and Central Yell Leaders, nine for the Quakers and six for the Big Reds.

It is a true work of art. 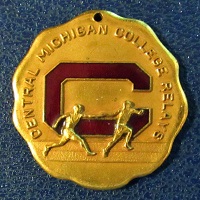 More than 2,300 athletes from 97 high schools descended upon Mt. Pleasant for the Tenth Annual Central Michigan Relays. Ecorse in Class B and Flint School for the Deaf in Class D earned team titles on Friday, May 5th while on Saturday, the 6th, Flint Northern and Milan won Class A and Class C, respectively. Six event records fell during the two-day event, three in the broad jump.

This medal, honoring a member of the winning Class C sprint relay team, was awarded at the event. The winning team, and therefore, the name of the individual awarded the medal, remain a mystery. 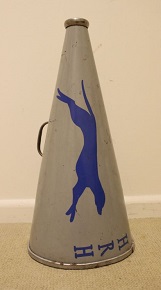 As at the majority of schools across the state at the time, athletic competition against other schools was not an option for Gloria Groll and her female classmates during her days as a student at Saginaw Holy Rosary High School. So, from the fall of 1959 until her graduation with 27 other students in the spring of 1962, she was a cheerleader for the Greyhounds. This beautiful megaphone, donated by Groll to the Saginaw County Sports Hall of Fame, is a memento from those times.

Holy Rosary was one of nine Catholic high schools operating in the Saginaw area in the 1950s and 1960s. Population shifts from the cities to the suburbs over the coming years would impact enrollment figures at schools nationally. In Saginaw, the opening of the Buena Vista School District in 1956 directly impacted Holy Rosary. In 1970 the school closed. A year later only three schools – SS Peter and Paul, St. Mary and Saginaw St. Stephen – remained.  In 1984, those schools were consolidated to form Saginaw Nouvel Catholic Central. 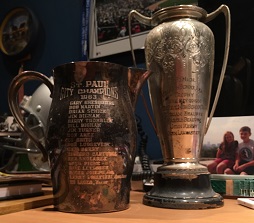 On the left, we find the trophy awarded to Grosse Pointe St. Paul's after winning the 1963 city championship. Bob Martin, a 6-foot-6 junior who earned first division all-Catholic honors, scored 14 of his 22 points in the fourth quarter to lead the Lakers to a 55-46 upset-victory over Detroit Pershing. The game was played at University of Detroit Memorial before 6,979 spectators. It was the first time since 1958 that the Catholic League won the annual matchup with the champions of the Public School League.

To the right is the trophy awarded to St. Paul for winning the first golf tournament of the South Michigan Catholic High School League. The school's four golfers shot 710 over 36 holes on the day, 69 fewer strokes than second-place Detroit St. Rose. Played at Clinton Valley, the event saw Bill Beaupre win individual honors with a total of 158, including 76 in the morning. His cousin and teammate, Harold Beaupre, finished second with 169, while Peter Bononis of Detroit Holy Name was third with 171 strokes. 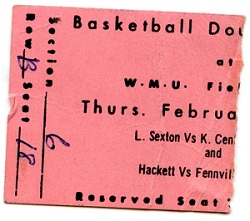 This ticket stub from a doubleheader hosted at Western Michigan University’s Read Fieldhouse on February 18, 1965 was the first chance for many to witness lightning in a bottle.  A capacity-plus crowd of 9,100 fans slid through the gate to watch a rumor.

The antics of 5-foot-7½ guard Richie Jordan had been talked about around the Kalamazoo area, but few had actually seen him play. His skills were on full display on this Thursday night, as he netted a fieldhouse scoring record with 49 points in a come-from-behind 76-72 win over a much taller team from Kalamazoo Hackett. Jordan’s output during the evening’s second game eclipsed the 45 points Manny Newsome scored for Western Michigan University against Toledo, just over a year before.

The evening hadn’t started well. According to the Kalamazoo Gazette, “Jordan hit only six of his 13 field shots in the first half and threw the ball away eight times. Trailing Hackett by 17 points, 50-33, with two minutes to play in the third quarter, the Blackhawks were able to cut the deficit to 13, 60-47 as the teams entered the final frame.

Quickly, everyone in the fieldhouse knew who was getting the ball during the comeback attempt. Jordan grabbed control; with his drives for layups and “softly-arched” jump shots against intense pressure, he hit seven of nine field goals, wowing the crowd. With 2:36 to play, Jordan nailed a pair of free throws to tie the game at 72 all. Then, with 57 seconds left, the “Fennville Flash” nailed the go-ahead basket, followed by two insurance free throws to seal the win. For many, his 24 points in the fourth quarter sealed his journey from rumor to legend and, no doubt, inspired the single-sentence first paragraph of the next morning’s coverage in the Gazette.

“Yes, there is a Richie Jordan!”

PHOTO: Fennville's Richie Jordan pulls up for a jumper, showing off the form that's become iconic when recalling the high school phenom. (Photos of Letterman's Trophy and Megaphone were provided by Jeffery Cottrell, and photo of Grosse Pointe trophies was provided by Bill Roose.)