“The Brother Rice-Moeller game is the biggest game any Michigan high school football team has ever played.”

On Saturday, September 22, 1979, Fracassa’s Warriors travelled 270 miles south from the hotbed of Michigan high school football to the hotbed of Ohio high school football for a first-ever showdown with Cincinnati Moeller. Heading into the 1980s, many would argue that Brother Rice was the top football (and perhaps the top boys prep sports) program in the state of Michigan. At the same time, many would say Moeller had replaced Washington Massillon High School as the premier grid program in the Buckeye State, and that Moeller also represented the nation’s top prep football team. To quote McCabe in his pregame write-up:

Moeller was coached by 44-year-old Gerry Faust – soon to become a Notre Dame legend. But in the fall of 1979, he was still building his impressive resume at Moeller.

While both were all-male Catholic schools and maintained three football teams – varsity, JV and freshman – there were stark differences. Fracassa’s varsity coaching staff at the time included three members: Mike Popson, Ron Kalczynski and Mike Cieslak. In comparison, Faust had 17 assistant coaches on his varsity staff (and 25 student managers).

“Every year is a rebuilding year for us,” said Faust. “We average between 24 and 38 seniors a year and about 20 of them start.”

“Their second team is as good as most teams around here, and I’m not exaggerating,” Fracassa told McCabe.

Entering the contest, Faust had posted a 152-17-2 record in 17 seasons at Moeller, while Fracassa, in his 20th year as a head coach, was 123-31-8. A former Detroit Pershing and Michigan State quarterback, Fracassa was named head football coach at Royal Oak Shrine in June 1960. After eight seasons at Shrine, Fracassa moved to Brother Rice and compiled an 86-14-3 mark, including a Class A mythical state title in 1974. His Warriors began an impressive 24-game winning streak in 1976, earning an MHSAA Class A playoff title in 1977, but the streak was ended by North Farmington in the Semifinal round of the MHSAA tournament in November 1978.

Faust arrived at Moeller in 1960 to start a football team and had guided the squad since the school began playing varsity ball in 1963. He first started bringing outstate teams to Cincinnati in 1977 with a game against Monsignor Farrell High School of Staten Island, NY. Jesuit High from Dallas, Texas, followed with a visit to Moeller in 1978.

Both Moeller and Rice were undefeated to start the 1979 season. Faust’s Crusaders had allowed only three first downs over three games, including a big 34-7 win over city rival Cincinnati Princeton, the school that had ended Moeller’s long winning streak, and a 30-13 victory over powerhouse Pittsburgh Penn Hills, a school with an enrollment of 4,200 that had compiled consecutive Class AAA Western Pennsylvania Interscholastic Athletic League championships in the three previous years under coach Andy Urbanic. With the defeat of Penn Hills, the Crusaders were a flawless 3-0 against teams from across state lines entering the Brother Rice contest.

A crowd of 20,792 (including members of the Brother Rice pep band) packed the University of Cincinnati’s Nippert Stadium for the 8 p.m. prep version of the Michigan-Ohio State game. Moeller did not have its own field, playing games at Nippert, Cincinnati’s Riverfront Stadium (home to the NFL’s Bengals and MLB’s Reds), or a nearby high school field. Moeller dominated the first half with 282 yards of total offense to Brother Rice’s 64, but held only a 13-7 lead at the half. Senior wingback Eric Ellington awed the crowd with touchdown runs of 43 and 61 yards during the first quarter. Rice rebounded with a five-yard touchdown on a bootleg by 5-foot-11, 170-pound senior quarterback Brian Brennan following a fumble recovery by Emil Nagengast during the second period.

Starting their first possession of the third quarter on their own 33-yard line, Ellington ripped off a 34-yard run to the Rice 33 on Moeller’s first play of the drive. Three plays later, he went left for 10 yards and his third touchdown of the game. The Crusaders opened up a 33-7 lead in the fourth quarter before Rice got back on the scoreboard. Fracassa went to the playbook for some “razzle dazzle.”

Operating from their own 32-yard line with 2:19 left to play, “Brennan tossed a deliberate bounce pass on a lateral to reserve quarterback Dave Yarema,” wrote Randy Holtz in the Cincinnati Enquirer. “Yarema then fired a 68-yard touchdown to the wide open Steve Allen to finish the game’s scoring.”

“We’ve been using it a long time,” said Fracassa, commenting on the play with limited delight following the 33-14 loss. “We told the kids before the game that this would be one of the best teams they were ever going to play against. They’re really a tremendous team. If you can’t contain Ellington, you’re in trouble. You’ve got to be something else to catch this kid.”

Ellington ended with 178 yards on 10 carries.

“Eric really ran well,” added Faust. “He’s a great back, but you’ve got to give credit to (our) line up front.” 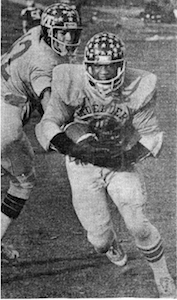 Due to the early format of the MHSAA playoffs, which were introduced in 1975, the defeat likely had eliminated Brother Rice from the state playoff picture. A 10-7 loss to Catholic League opponent Detroit Catholic Central in Week 5 of the season and a 6-3 regular-season record ensured no postseason play for the Warriors in 1979. Detroit Catholic would end the year as Class A state champ with a perfect 12-0 record.

The Ohio High School Athletic Association had begun its football playoff system in the fall of 1972. To little surprise, Moeller went on to win the state’s Class AAA title for the fourth time in 1979, defeating Parma Padua Franciscan 41-7. Moeller again was proclaimed national champion by the National Sports News Service. (For those interested, highlights can be found here).

College Comes Calling
Back in Michigan, in February 1980, Fracassa applied for the head coaching position at Michigan State to replace Darryl Rogers, but wasn’t interviewed. When Frank “Muddy” Waters was named as MSU’s new coach, he offered Fracassa the position of offensive coordinator. But Fracassa chose not to go. In the fall, his Warriors again won the Class A championship. It wouldn’t be his last opportunity to jump to the college game.

The Great Experiment
In Ohio, Faust’s Crusaders would win the state and national titles again in late November 1980. After more than a month of rumors, on the day after winning the state title, Gerald Anthony Faust was officially announced as “the only head coach Notre Dame has ever selected from the high school ranks.”

Another Chance at MSU
Fracassa was a back-up signal caller at Michigan State. “I was always stuck behind the All-Americans,” he told the Detroit Times in 1960 shortly after taking charge at Royal Oak Shrine.

“First, he understudied Al Dorow,” wrote Wally Dwyer in the Times. “Then it was Tom Yewcic and finally Earl Morrall.” 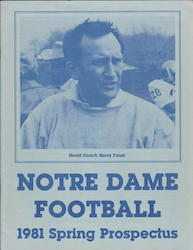 In December 1982, George Perles was named to replace Waters as head coach at Michigan State. A former teammate of Fracassa’s at MSU and, later, a coaching friend and rival when Perles coached Detroit St. Ambrose and Fracassa guided Shrine, Perles spoke to Fracassa about the possibility of joining the Spartans’ defensive staff. Again, Fracassa chose to remain at Brother Rice.

A Legacy Sealed …
In the fall of 1983, Fracassa’s Warriors grabbed another Class A title. It was the third of nine MHSAA championships his teams would ultimately earn. When he retired following the 2013 season, he was the state’s all-time winningest football coach with a 430-117-7 mark.

… and a Legacy Altered
In November 1985, Faust resigned from his position at Notre Dame.

“Faust said the job was ‘the fulfillment of a lifelong dream,’” wrote Mitch Albom in the Free Press, days after the announcement. “And he did it proud on most counts. He worked feverishly, turned out good men, a clean program. And technically, a winning program, 30-25-1. But nowhere near winning enough for Notre Dame.”

To the dismay of countless Irish fans, Notre Dame continued to honor its contract despite the losses. “No matter how loudly the fans yelled,” noted Albom, “the school would not fire Faust.”

“So, with a choked voice and moist eyes, he saved the university the ugliness of firing him by resigning with one game left on his contract.”

“We probably won’t see another Gerry Faust experiment again,” added Albom at the time. “Everyone will point out that it didn’t work the first time …”

“College football was once a game of its name. College kids playing football. That was long ago. Today it is a multimillion-dollar industry …”

The great experiment certainly altered memories of Faust, the structure of coaching contracts, and the path for all high school coaches who aspired to lead at a higher level. One might even say it was a turning point for winning and losing, and what would be ‘acceptable’ at all levels of sports across America.

P.S. Moeller and Rice again met in 2007, with the Crusaders again topping Brother Rice, this time 14-6. Both schools had entered this match-up with identical 2-1 records.